Clinicians must consider and evaluate the unique characteristics and treatment options for older men with prostate cancer, who are more likely to be diagnosed with advanced disease, and tend to have higher mortality rates and poorer prognosis.

Given the demographic distribution of patients with prostate cancer, clinicians must consider and evaluate the unique characteristics and treatment options for this population. Unlike younger men, older men are more likely to be diagnosed with advanced disease, and tend to have higher mortality rates and poorer prognosis.3

Many older patients with prostate cancer are treated with systemic therapies, stressing the importance of evaluating clinical outcomes and safety profiles specifically in the elderly. Treating elderly patients presents certain challenges, including higher rates of comorbidities, physical frailty, and lower tolerance for adverse events (AEs). Several recent studies have investigated the safety and efficacy of next-generation antiandrogen therapies and chemotherapy in the geriatric population.Peter Mulders, MD, PhD, Radboud University Medical Center, Nijmegen, The Netherlands, and colleagues reported their findings of abiraterone acetate in elderly patients who had received prior chemotherapy in European Urology.4 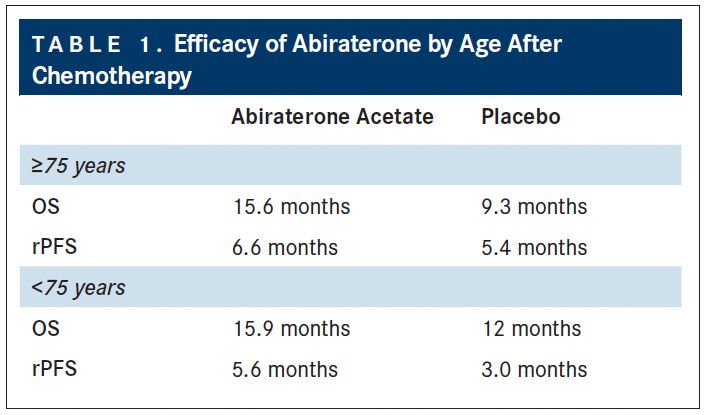 Abiraterone acetate, the prodrug of abiraterone, is an inhibitor of CYP17A that targets extragonadal synthesis of androgen. Since 2011, it has been approved for use in patients with metastatic castration-resistant prostate cancer (mCRPC) who have received prior docetaxel therapy, and since 2012 for patients who are chemotherapy-naïve (TABLE 1).7

“This analysis is reassuring with respect to the risk—benefit ratio of treating elderly patients with AA, and AA is a viable treatment option for the elderly, either after docetaxel or for those not fit for docetaxel due to other comorbidities,” the authors concluded. 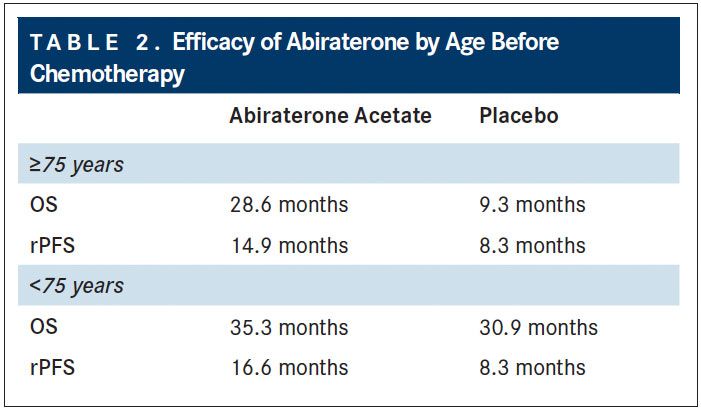 Outcomes were further explored in an elderly population, in parallel post hoc analyses of the COU-AA-302 trial, which was the landmark study that led to the approval of AA in chemotherapy-naïve patients.8,9 Further results were also published in the November 2015 issue of The Journal of Urology (TABLE 2).10

In conjunction with the results reported by Mulders et al, these findings “support the use of abiraterone therapy in elderly men with mCRPC regardless of prior chemotherapy,” Smith and coauthors wrote.

Comparable results have been observed in other studies. In one retrospective trial, Raya Leibowitz-Amit, MD, PhD, from Tel Aviv Hospital in Israel, and colleagues evaluated the toxicity and efficacy of AA and docetaxel in patients with mCRPC age ≥80 years, assessing PSA response rate, incidence of toxic AEs, OS, and biochemical PFS.11 Relative to younger men, octogenarians had similar rates of PSA response rate, biochemical PFS, and OS with AA therapy. Treatment was well tolerated in both age groups, with no significant differences in mineralocorticoid excess events and mild liver toxicity rates. 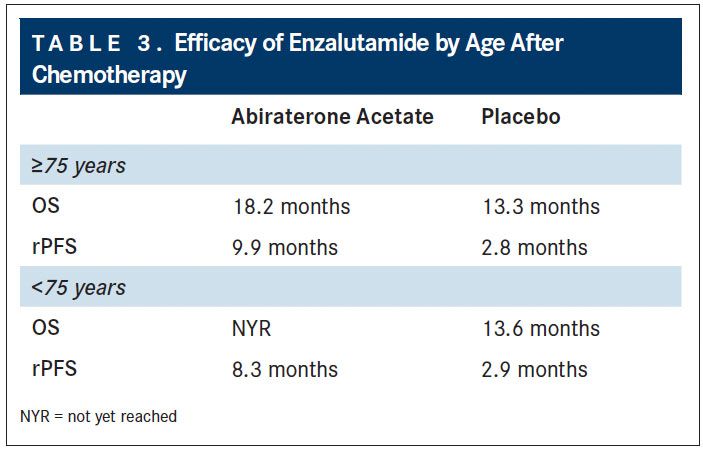 The investigators stressed that despite this analysis being retrospective in nature, it reflects a “real life” experience because most data were obtained outside of a clinical trial. Taken together, the results of these studies support the use of AA in an elderly population, especially for patients who may be more sensitive to alternative therapies with greater toxicity.11In the February 2014 issue of Annals of Oncology, Cora Sternberg, MD, from San Camillo-Forlanini Hospital in Rome, Italy, and coauthors reported the outcomes of younger and elderly patients treated with enzalutamide who had received prior docetaxel therapy using a post hoc analysis of the AFFIRM trial (TABLE 3). Efficacy outcomes for OS, radiographic PFS, TTPP, and PSA response, as well as safety, were assessed.12,13

Enzalutamide is an androgen receptor inhibitor that competitively binds to its ligand-binding domain. It has been approved for use in patients with mCRPC both before and after docetaxel.

In both age cohorts, OS was significantly longer with enzalutamide compared with placebo (younger: median not reached vs 13.6 months; P <.0001; elderly: 18.2 vs 13.3 months; P = .004). Similarly, radiographic PFS was improved in younger (HR, 0.45; P <.001) and elderly (HR, 0.27; P <.001) patients with enzalutamide, as was TTPP and PSA response. The incidence of all-grade peripheral edema, fatigue, and diarrhea were greater in elderly patients than in younger patients with enzalutamide. Grade ≥3 AEs were similar between both age groups and treatment cohorts.13 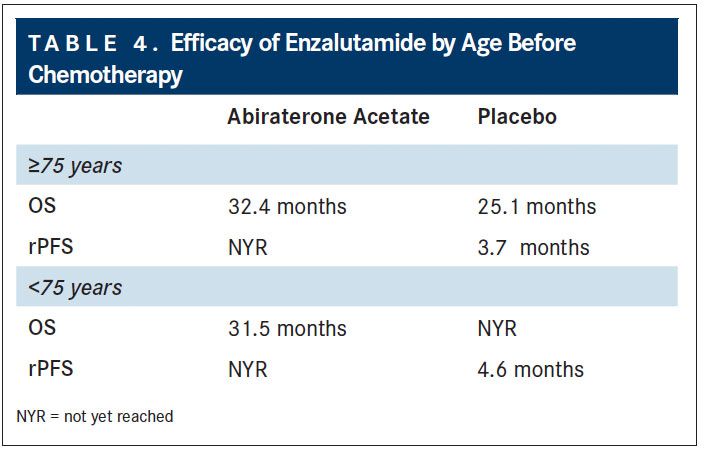 Investigators reasoned that the data from this study as well as previous post hoc analyses support that “second-generation hormone therapy is safe and effective in men aged ≥75 years, reinforcing the stance that physicians should not discriminate on the basis of age alone when selecting treatment for mCRPC.”

Enzalutamide does not require concomitant corticosteroid treatment. In terms of sequencing, the authors pointed out that AA and enzalutamide have unique safety profiles that should be carefully evaluated when making therapy selection for elderly patients.Until recent years, docetaxel was the only chemotherapeutic agent available that offered a survival advantage in mCRPC. Compared with mitoxantrone, docetaxel significantly improved OS and quality of life. However, toxicity in elderly patients, namely myelosuppression and sepsis, has been of concern. In the TAX327 trial, elderly patients age ≥75 years experienced significantly higher rates of infection and needed more docetaxel dose reductions than younger patients.16,17

To address these toxicity concerns, Hui-Li Wong, MD, from the Walter & Eliza Hall Institute of Medical Research in Sydney, Australia, and colleagues evaluated dosing practices, efficacy, and tolerability in very elderly patients (age ≥ 80 years) in a retrospective study of 20 patients with mCRPC.18 Although 56% of assessable patients had a PSA response rate of ≥50%, 40% required an initial dose reduction, and 55% required subsequent dose delays or reductions. Grade 3/4 hematologic toxicity occurred in 45% of patients, and chemotherapy-related complications requiring hospitalization occurred in 25% of patients.

Similarly, in the analysis by Leibowitz-Amit et al,11 PSA response rates and OS were similar in octogenarians and younger men, although toxicity-related docetaxel cessation and febrile neutropenia occurred more frequently in octogenarians.

“Our results suggest that amelioration or prevention of chemotherapy-induced-toxicity is difficult in octogenarians even with modification of dose and schedule [with docetaxel], and that even awareness and careful vigilance of treating physicians cannot mitigate toxicity altogether,” Leibowitz-Amit and coauthors concluded.

Overall, advances in recent years have broadened the therapeutic options for all patients with mCRPC. In order to provide optimal clinical outcomes for elderly patients, clinicians must carefully weigh the individual needs of the patient against the safety and efficacy of specific agents, while remembering that elderly patients may have different goals of care than younger populations.