Ajai Chari, MD, shares some background on talquetamab, reported safety and efficacy findings from MonumenTAL-1, and highlighted other ways in which the agent is being explored in multiple myeloma. 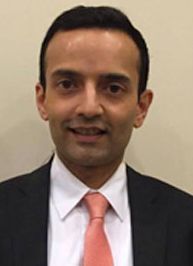 Talquetamab (JNJ-64407564) generated deep and durable responses in heavily pretreated patients with relapsed/refractory multiple myeloma—including different subsets of patients with high-risk features, according to Ajai Chari, MD, who added that the agent is now being explored in combination with other backbone agents to further improve outcomes for those with this disease.1

Data from the phase 1/2 MonumenTAL-1 trial (NCT03399799) presented at the 2022 ASH Annual Meeting demonstrated that patients who were treated with talquetamab at a dose of 0.4 mg/kg weekly (n = 143) or 0.8 mg/kg twice weekly (n = 145) experienced similar objective response rates (ORRs) of 74.1% and 73.1%, respectively. Notably, those with triple-class refractory disease who received the weekly and twice weekly doses, the ORRs were 72.6% and 71.0%, respectively; for those with penta-drug refractory disease, these rates were 71.4% and 70.6%, respectively. Notably, the ORR achieved with the agent proved to be consistent across other key subgroups analyzed.

Based on data from MonumenTAL-1, a biologics license application seeking the approval of talquetamab in patients with relapsed or refractory multiple myeloma was submitted to the FDA in December 2022.2

“Because of the nice safety profile of this agent, it is also being studied with a lot of other backbone multiple myeloma drugs, including daratumumab [Darzalex] and teclistamab-cqyv [Tecvayli],” Chari said in an interview with OncLive®. “[Talquetamab is also being investigated] with checkpoint inhibitors because we know that T-cell exhaustion may be playing a part in [why] patients progress or [experience] suboptimal responses. Many exciting ongoing studies are seeking to further extend the use of this drug.”

In the interview, Chari, who is a professor of medicine and the director of Clinical Research in the Multiple Myeloma Program for the Icahn School of Medicine at Mount Sinai in New York, New York, shared some background on talquetamab, reported safety and efficacy findings from MonumenTAL-1, and highlighted other ways in which the agent is being explored in multiple myeloma.

OncLive®: Please provide some background on talquetamab and what makes the agent unique from other options in the relapsed/refractory multiple myeloma paradigm.

Chari: Talquetamab is a bispecific antibody, and this is particularly exciting. [Although] we’ve had monoclonal antibodies approved for multiple myeloma since 2015, those were naked antibodies. The first bispecific [antibody] that was approved [in October 2022] was teclistamab.

However, talquetamab is different because of the target. Both [teclistamab and talquetamab] bind CD3, but [with talquetamab], the second target is GPRC5D. This is an important target because it’s overexpressed on primarily malignant plasma cells relative to normal [cells], and it’s generally not expressed in most human tissues, with the only exception of heavily keratinized tissue such as skin and nails. That is important because it’s not expressed on the hematopoietic stem cell precursors. This expression pattern lends itself to a nice efficacy and safety balance.

What were the phase 1 findings from the MonumenTAL-1 trial that were published in The New England Journal of Medicine (NEJM)?3

[Data from the] phase 1 study were published in the NEJM [in December 2022]. As with all phase 1 studies, the goals [of the research] are focused on safety and dose finding. In that study, there were a variety of doses [of talquetamab] evaluated, with both intravenous and subcutaneous administration.

[Findings showed] that this was a very active drug. Even though this was a phase 1 study, it was quite large, with [232] patients. The [ORRs] at the recommended phase 2 doses [RP2Ds] were 70% [for patients given talquetamab at 0.4 mg/kg weekly and 64% at 0.8 mg/kg every 2 weeks]. The safety profile was quite manageable, and this was confirmed in the phase 2 study.

What should be noted about the new data from the trial presented at the 2022 ASH Annual Meeting?

At ASH, for the first time, we presented phase 2 results at the RP2Ds: 0.4 mg/kg every week and 0.8 mg/kg every 2 weeks. [We also provided insight on] a third cohort of patients who had prior T-cell redirection therapy. That was important because we know that patients [with relapsed/refractory disease] who are getting CAR T-cell therapy and bispecific [antibodies tend] to do well. However, what happens when they progress? This is a new unmet need, and there are very few prospective studies [that are] looking at that.

With these 3 cohorts, [data on] the vast majority of patients have never been presented before; however, some patients from phase 1 [portion of the research] who received these [RP2Ds] were included in the analysis.

Could you provide additional insight into the patient population examined?

The patient characteristics are very important to describe in this study because approximately 60% of patients were high risk in some way, [meaning they had] high-risk cytogenetics, extramedullary disease, or International Staging System [ISS] stage III [disease]; the latter two [features] are particularly important because they have been identified in both CAR T-cell therapies and bispecific antibodies as being high risk in the era of T-cell redirection, and about 40% of patients were high risk by one or the other.

[Enrolled] patients also had received a significant number of [prior] lines of therapy, [at a median] of 5 lines. These were also very heavily pretreated patients. The vast majority of patients were triple-class refractory, and approximately one-quarter of patients were penta-drug refractory. Additionally, [93.7% and 94.5% of patients in the 0.4-mg/kg and 0.8-mg/kg cohorts, respectively] were refractory to their last line of therapy.

What were the key efficacy findings reported during the meeting?

With this high-risk population, we saw an [ORRs] of 74.1% [with talquetamab at 0.4 mg/kg weekly] and 73.1% [with talquetamab at 0.8 mg/kg every 2 weeks]. To put that into context: historically, for a new drug to get approved [by the FDA], you needed an ORR of 20% to 30% in an unmet need population. Here, we are now 73.1% and 74.1%. That’s what is exciting about this whole era of T-cell redirection. Patients who were looking at hospice are now having some of the most deep and durable remissions they’ve had in years.

Additionally, important subgroups maintained those responses: including those with penta-refractory, triple-class refractory, and ISS stage III disease. The only group that did not were those with extramedullary disease, and even in those patients, the [ORR achieved with the agent] was [approximately] 50%.

What should be known about the safety of talquetamab?

In terms of safety, the main high-grade toxicity was hematologic. The rates of grade 3/4 hematologic toxicities [of anemia, neutropenia, lymphopenia, or thrombocytopenia] were all [31.5% or less in both dose cohorts], which is impressive compared with [what has been observed with] some of the other drugs and products in this space.

Secondly, the infection profile of this agent is fascinating. Many of us have been wondering about the infection signal in BCMA-directed therapies. It should be emphasized that this drug was also studied in the era of COVID-19. [Rates of] grade 3/4 infections were relatively modest at [16.8% in the 0.4-mg/kg cohort and 11.7% in the 0.8-mg/kg cohort]. In contrast, some of those other projects have an incidence of as high as 46% [of these kinds of infections]. Regarding COVID-19–related deaths, there were only 2 in this phase 2 study, and 0 reported in the phase 1 study. At Mount Sinai, we have seen that when you check an antibody response to a COVID-19 vaccine, these patients are mounting a good response, which supports the lack of deaths.

The third and final difference in this kind of infection profile is the immunoglobulin repletion rates, or IVIg use. In some of the other products, [this rate] can be as high as 40%. Here, it was [13.3% and 9.7% in the 0.4-mg/kg and 0.8-mg/kg cohorts, respectively]. The lack of cytopenias and infections is a very important profile, and [talquetamab] lends itself to [combinations] with other agents.

However, there were a few other on-target, off-tumor adverse effects [AEs]. One AE [involved] the skin. We did see rashes but typically, these [cases] were low grade. When [rashes were] high grade, they were readily manageable with topical or intravenous steroids, typically [given] in the first cycle. There were also nail changes, which can be a little more persistent. Finally, dysgeusia, or the loss of taste, [was also observed].

All these non-hematologic toxicities tended to be low grade, and although low-grade toxicities are important, the rates of patients coming off study or discontinuing for AEs was only [4.9% in the 0.4-mg/kg cohort and 6.2% in the 0.8-mg/kg cohort].

The management of the dysgeusia was either supportive care, such as artificial saliva or hydrating agents or decreasing the dose intensity of the drug. With these supportive care measures, most patients were able to stay on treatment. This tells us that overall, this risk/benefit profile is very favorable with a 73.1% or 74.1% ORR and manageable, low-grade toxicities.

What are next steps for talquetamab?

The biologics license application for talquetamab was submitted [to the FDA] in [December 2022]. We are hoping that this could lead to an accelerated approval [for the agent]. The confirmatory phase 3 [MonumenTAL-3 trial (NCT05455320)] is ongoing. [Here,] talquetamab is being [explored in combination] with daratumumab and pomalidomide [Pomalyst] and [compared with talquetamab plus daratumumab and the control arm of daratumumab, pomalidomide, and dexamethasone.

What should be taken away from these findings?

We’re in an unprecedented era for relapsed/refractory multiple myeloma. I have patients who I have spoken to about hospice who are alive and well, and they [have experienced] some of the best, deepest remissions they’ve [ever] had. It’s a whole new era. Sometimes in [this disease], one of the struggles is that we get so many drugs approved, and we don’t know how to sequence them. However, at the end of the day, we need these agents. Patients are in desperate need of novel agents.

There are a lot of BCMA-directed therapies [already available]. [Talquetamab] is a first-in-class drug [with] a novel target and that’s why these are such exciting data that are generating so much interest.