Concurrent Immunotherapy and Chemoradiation Under Study in Stage III NSCLC

Martin F. Dietrich, MD, PhD, discusses the significance of the PACIFIC trial on clinical practice and research efforts in stage III non–small cell lung cancer, expectations for ongoing clinical trials, and the emergence of targeted therapy in the adjuvant setting 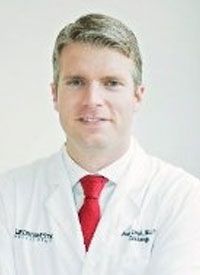 Pending the results of the ongoing phase 3 PACIFIC 2 (NCT03519971) and CheckMate73L (NCT04026412) trials, investigators will be able to answer whether concurrent immunotherapy and chemoradiation should become a new standard of care for patients with unresectable stage III non–small cell lung cancer (NSCLC), a treatment intensification strategy that is expected to lead to better outcomes for a broader patient population, said Martin F. Dietrich, MD, PhD.

“We’ll have to see, but I do believe that immunotherapy in the concurrent setting will be of great benefit, and it will also pacify those that are holding on to chemotherapy by not replacing it [with the current standard of care],” said Dietrich.

In an interview with OncLive, Dietrich, an assistant professor of internal medicine at the University of Central Florida in Orlando, discussed the significance of the PACIFIC trial (NCT02125461) on clinical practice and research efforts in stage III NSCLC, expectations for ongoing clinical trials, and the emergence of targeted therapy in the adjuvant setting.

OncLive®: What have been some of the most significant updates in the treatment of patients with stage III NSCLC in recent years?

Dietrich: The biggest [advance] we have seen is the addition of adjuvant or consolidative immunotherapy following the completion of concurrent chemotherapy and radiation. We have seen the 4-year overall survival [OS] data now and the 5-year update for the PACIFIC study in the adjuvant setting, confirming the initial signal that patients that initiate immunotherapy early carry a significant risk reduction for progression-free survival and OS. We’re doing much better in this space. This [approach] is certainly standard of care for all patients receiving concurrent chemotherapy and radiation.

For the subgroups of patients who have EGFR and ALK mutations, trials are ongoing that are looking at targeted therapies. Eventually these targeted therapies will replace immunotherapy in the adjuvant setting, for EGFR at least. We have seen the data for adjuvant EGFR inhibition for resected, stage III patients. This is also progress in addition to what you would typically do, which is 4 cycles of platinum-based chemotherapy.

We have progress on multiple ends here that are being seen. We have had some interest and some ongoing trials looking at whether concurrent immunotherapy with radiation would be a feasible practice pattern.

What is the significance of the 5-year follow-up data from the PACIFIC trial?

This [trial] was the practice-changing breakthrough that we’ve been looking for, although we still have some issues implementing [the regimen]. The time from completion of chemotherapy and radiation to adjuvant or consolidative immunotherapy has been a problem. The signal we have seen is that the lapsed time shouldn’t be too long. Now we’ve seen improvements in those patients that were randomized within 2 weeks vs those who were enrolled later. Unfortunately, in practice, we oftentimes see delays that are probably 2 or 3 months long.

The synergy between early introduction of immunotherapy and radiation here is best if you do this enclosed follow-up sequence. However, [the approach] is practice changing. This was one of the very few improvements that really made a big dent, more so than concurrent chemotherapy and more so than the different dosing regimens that we’ve seen for radiation. The appreciation of stage III as a systemic disease that can be widely grasped by immunotherapy is critical.

The PACIFIC 2 trial could build on findings from PACIFIC. Could you outline that study? What are your expectations for the trial?

The PACIFIC 2 trial is building on the PACIFIC study. Instead of using durvalumab [Imfinzi] in consolidative fashion, [the investigators are] basically [evaluating] concurrent usage of immunotherapy that is synergistically designed to capture the mechanism of proinflammatory radiation and the immune activating impact of durvalumab.

We’re wanting to see if there is an additional benefit [with concurrent immunotherapy]. We are working with 2 antagonistic mechanisms of chemotherapy and immunotherapy, and we’ll have to see how the data shake out. When it comes to durability of response, we see a bigger impact from immunotherapy and the immunosuppression that eventually has cumulative toxicity, especially as we approach the end of radiation.

We would really like to see that this is a regimen that, from a systemic adverse effect [AE] profile as well as from an efficacy standpoint, is better tolerated and hopefully also leads to better outcomes. However, the data are not out. We’ll have to say that for now, concurrent chemoradiation followed by immunotherapy is really the standard of care except for the EGFR and ALK subgroups, which are more contested.

Another trial in this setting is CheckMate73L, which is evaluating nivolumab and chemoradiation followed by nivolumab and ipilimumab (Yervoy). What served as the inception of that trial?

There are some very early but promising data for neoadjuvant therapies in the presurgical context, and this [has] a very similar signal. There’s no reason to believe, clinically or biologically, that this [approach] wouldn’t have an increased impact. We do also want to closely observe for additional toxicity concerns with doublet immunotherapy to see how the data look from a balance of efficacy and safety.

Whether you think about adjuvant, neoadjuvant, or consolidative immunotherapy, the principles of biology have held true throughout all disease stages, and that the introduction [of concurrent and doublet immunotherapy in the stage III setting] would probably yield a similar level of benefit as we’ve seen in the stage IV setting. I’m curious about the toxicity, but more curious about the efficacy.

In the stage III setting, we have observed a very interesting phenomenon, which is that in clinical practice, oftentimes, the threshold to stop medication is lower than it is in the metastatic setting. One can look at it from both ends. One can say, well it’s an optional stage, so stopping it at the first side of AEs or out of convenience is a reasonable idea. I like to think of it as a “higher-stakes” setting in stage III where we really, more realistically, look at this as curative, even though we have now long-term survivors in the stage IV setting as well.

I would think that the intensification of therapy in early lines of therapy is really going to be one of the pathways for us to provide better outcomes for a broader set of the lung cancer community. Beyond durvalumab right now, we don’t have any immunotherapy in the curative-intent setting. I think this will change soon with adjuvant atezolizumab [Tecentriq], at least in the PD-L1–positive population. But the same principle holds true there; we’ve seen a large benefit in the PD-L1 greater than 50% population and a lesser benefit for patients who have PD-L1 expression between 1% to 49%.

What are your predictions in terms of the tolerability of this regimen?

I don’t expect any additional concerns [than] what we’ve seen in the stage IV setting. This [trial] is [investigating] a new ipilimumab dose. The standard 1 mg/kg body weight for ipilimumab is going to be better tolerated. The relative incremental increase in AEs is substantially less, unlike PD-1/PD-L1 inhibitors where the dose dependency on AEs doesn’t seem to be as clear. For CTLA-4 inhibitors, [the relationship between dose and toxicity] is almost exponential between 1 mg/kg, 3 mg/kg, and 10 mg/kg body weight. My prediction is that this [regimen] is going to be as tolerated [in the stage III setting as] in the stage IV setting.

I do think the [investigators] will have to distinguish between the reputation of toxicity and the actual presentation, especially when we look at gastrointestinal toxicities. Ipilimumab has really shaped up to be more manageable with a reduction in the occurrence of AEs [because of the way] we manage [toxicities]. We’ve learned a great deal about the usage of the colitis armamentarium, in the setting of autoimmune disease beyond steroids. That’s why I think those regimens will be feasible, and if they provide an improved outcome, the acceptance of an increased toxicity potential is reasonable.

The intensification of immunotherapy responses is the only pathway that we currently have within reach to enhance our long-term responses. One of the ASCO signals that we have seen is an AE leading to discontinuation provides an improved OS outcome. Unlike chemotherapy, where these setbacks are detrimental for patients, here they may be beneficial and what we’re trying to achieve, which is a general activation of the immune system.

Are there any other research efforts ongoing that are evaluating therapies for this patient population that should be emphasized?

In the stage III population, the most practice-changing trial is going to be the LAURA trial [NCT03521154], which is looking at adjuvant osimertinib [Tagrisso] following chemotherapy and radiation in the setting of an EGFR mutation. In the PACIFIC trial, it was clear that this subset seemed to derive a small benefit, which biologically would be congruent with what we’ve seen in the stage IV setting, so this is going to revamp the idea.

We’ve seen several interesting trials that looked at induction chemoimmunotherapy in this trial setting of stage III lung cancer, and the response rates were dramatic, so maybe shaping the radiation fields into a smaller setting and containing disease earlier [may be of benefit]. Which of these regimens will be the winner will depend on the data. We don’t have any side-by-side comparisons. Some patients benefit from chemotherapy and some patients benefit more from immunotherapy.

In the absence of clear guidance on biomarkers and other features, the combinations will eventually win the race like how they do in the stage IV setting. Chemotherapy plus immunotherapy is going to be what we use, at least in the concurrent setting, followed by immunotherapy maintenance.