Blood-based biomarkers offer great potential for use in the management of breast and other cancers. 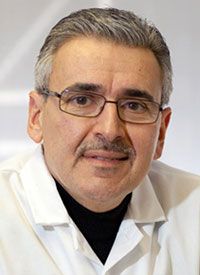 Blood-based biomarkers great potential for use in the management of breast and other cancers. Critical elements in clinical application include analytic validity and clinical validity, which would be required to ultimately establish clinical utility—a biomarker-directed treatment change that results in clinical benefit.1

CTCs are shed from the tumor and into the bloodstream, where a small percentage survive, extravasate, and colonize distant sites, ultimately developing clinical evidence of metastasis, in some cases after a period of tumor dormancy.

It is estimated that only 1 in 10 million tumor cells from a primary tumor will reach the blood- stream, accounting for only 1 in 10,000 nucleated cells per milliliter of blood,4 with a short half-life of less than 3 hours.5

CTCs were first noted in cancer by Thomas Ashworth in 1869.6 Since this seminal observa- tion and the first isolation of CTCs from a blood sample reported in 1955,7 over 50 assays have been reported using different techniques for CTC identification, enumeration, and, in some cases, molecular characterization. Cleared, analytically validated assay that facilitates microscopy-based detection and enumeration of CTCs in metastatic breast, colorectal, and prostate cancers using immunomagnetic beads for positive selection of CTCs expressing epithelium-specific cell adhesion molecule, a positive selection method.2,8,9

This review will focus on the use of this assay, the CellSearch System (Menarini Silicon Biosystems, Inc; Bologna, Italy), in early and advanced breast cancer. Some of the key conclusions regarding research conducted to date and potential future ap- plications are summarized in the Table.CTCs are detectable in approximately 65% or more of patients with metastatic breast cancer (MBC), and a CTC count ≥5 cells per 7.5 mL of blood in MBC is associated with significantly inferior progression-free survival (PFS) and overall survival (OS),8 providing evidence for clinical validity. However, prospective randomized trials have not established clinical utility, as described below.

The EORTC 90091-10093 BIG 1—12 “Treat CTC” trial (NCT01548677) was a prospective clinical trial including 63 patients with non-metastatic breast cancer who had detectable CTCs (>1/7.5 mL blood) after neoadjuvant chemotherapy and surgery and who were randomized to trastuzumab (Herceptin) or observation. There was no difference in CTCs at week 18, the trial’s primary endpoint, and the trial was halted for futility.11

CTCs in Early Breast Cancer Within 2 Years After Diagnosis

Several other randomized trials are ongoing, as reviewed elsewhere.12 The DETECTIII trial (NCT01619111) is comparing lapatinib (Tykerb) plus chemotherapy or chemotherapy alone in patients with at least 1 CTC with strong HER2 immunocytofluorescence. The CirCe01 trial (NCT01349842) includes patients with MBC and a high CTC count (≥5/7.5 mL blood) about to initiate third-line therapy who are randomized to CTC-directed versus clinically directed change in therapy.CTCs are detectable in about 20% to 25% of patients with localized nonmetastatic breast cancer at the time of diagnosis and also provide independent prognostic information using a lower threshold (≥1 CTC per 7.5 mL blood) than in MBC (≥5 CTC per 7.5 mL blood), whether obtained before or after surgery, including after neoadjuvant or adjuvant chemotherapy, providing additional evidence for clinical validity.13,14

CTCs were detected at 2 years in 18% of 1087 patients with stage II to III breast cancer enrolled in the phase III SUCCESS-A trial,17 which was one of the trials in which CTC was found to be prognostic at diagnosis.14 At 2 years, a positive CTC assay was associated with a 3.9-fold higher risk of death and a 2.3-fold higher risk of recurrence in multivariate models that included clinicopathologic features and CTC status at baseline; sensitivity analysis showed this effect only in HER2-negative disease.Late recurrence 5 or more years after diagnosis accounts for more than one-half of patients with HR-positive breast cancer.18 Factors associated with higher late recurrence risk include positive axillary nodes and primary tumor size >2 cm, and tools such as the CTS5 calculator may provide more precise estimates of late recurrence risk for individual patients.19 In a study including 353 patients with HR—positive, HER2-negative, stage II to III breast cancer treated with adjuvant chemotherapy and endocrine therapy followed up for 4.5 to 7.5 years after diagnosis without evidence of clinical recurrence, CTCs were detectable in 5.1% (median, 1 cell per 7.5 mL blood; range, 1-15 cells per 7.5 mL blood). Moreover, CTC positivity was associated with a 13.1-fold increase in recurrence risk in mul- tivariate analysis adjusted for other prognostic covariates.20

Because imaging was not performed in any of these trials at the time of the positive CTC assay, it is currently unknown what propor- tion of patients who are CTC positive would be found to have clinical evidence of asymptomatic metastatic disease. In a similar analysis of 206 patients enrolled in the SUCCESS-A study with follow-up information and known CTC status at 5 years, 7.8% were CTC positive at 5 years, which was associated with a 6-fold in- crease in recurrence.21There are several potential strategies for establishing the clinical utility of CTC enumeration and/or characterization, including as a surrogate/replacement of or adjunct to diagnostic imaging,22 therapeutic selection, and surveil- lance. Several ongoing trials may shed further light on the clinical utility of CTC-directed therapy. Here we focus on the potential opportunities as a surveillance biomarker.

Evidence-based guidelines recommend surveillance after treatment of localized breast cancer including history, physical examina- tion, and annual mammography.23,24 Blood- based biomarkers and imaging studies beyond mammography are not recommended in asymptomatic patients, although these recom- mendations are based on trials performed at a time when diagnostic, imaging, and therapeutic options were limited.25 The availability of more effective therapies for MBC, such as immune checkpoint blockade for triple-negative disease26 and CDK4/6 inhibitors27 or novel oral selective estrogen receptor downregulators28 for HR—positive disease, offers potential for early intervention that could ultimately delay or even prevent metastasis.29

Recently, the FDA granted regulatory approval for antiandrogenic agents in the treatment of nonmetastatic castration-resistant prostate cancer based on the endpoint of metastasis-free survival in a setting where an integral biomarker (serum prostate specific antigen) was used to select men at high risk for developing metastasis and lacking distant disease based on standard diagnostic imaging.30 This provides a foundation for de- veloping a similar approach for surveillance and treatment of high-risk, nonmetastatic breast cancer, as exemplified by 2 hypothetical trial designs shown in the figure, including a biomarker selection design and a biomarker stratification design, each of which has its own advantages and disadvantages.29 Such future trials should include cross-platform comparison of different CTC methodologies and other biomarkers, including protein-based markers, ctDNA, and exosomes.