Inhibiting the RANKL protein, which is involved in bone metabolism, can delay the onset of the bone metastases in men with castration-resistant prostate cancer. 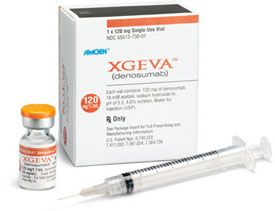 Inhibiting the RANKL protein, which is involved in bone metabolism, can delay the onset of the bone metastases in men with castration-resistant prostate cancer (CRPC), according to a large international study presented at the European Multidisciplinary Cancer Congress 2011 (ECCO/ESMO/ESTRO).

The primary endpoint of the study was time to first bone metastasis or death from any cause. The study ran from February 2006 to July 2010. By the end of this time period, more than 660 men had developed bone metastases or had died.

The researchers found a significant prolonged bone metastasis-free survival in the denosumab group as compared with the placebo group (P=0.03). The researchers saw this benefit regardless of subgroup, such as age (< 75 or ≥ 75), ethnicity, or geography (North America, Europe or the rest of the world).

The median bone metastasis-free survival for the denosumab group was 4.2 months compared with the placebo group (29.5 and 25.2 months, respectively).

In addition, the researchers found that the denosumab delayed time to symptomatic bone metastasis (P=0.01).

The human monoclonal antibody, denosumab, works by inhibiting the RANKL protein, a key mediator in the formation of osteoclasts, cells involved in bone resorption. Suppressing this osteoclast activity may inhibit the release of growth factors that lead to metastasis, therefore, delaying its onset.

The primary tumors of up to 90% of men with CRPC will metastasize to the bone, according to Professor Stéphane Oudard, head of the oncology department at the Georges Pompidou Hospital in Paris, who lead the study. When this occurs, the risk of death is almost five times greater for these men than for men without bone metastases, according to the researchers.

Patients with metastatic disease face critical complications, such as pain, fractures, and spinal cord compression, which can profoundly affect a patient’s quality of life.