Dr. Niemann on Notable Findings from the GLOW Trial in CLL

Carsten Niemann, MD, PhD, discusses notable data on patient survival outcomes, as well as the impact of minimal residual disease in the peripheral blood from the phase 3 GLOW trial in patients with chronic lymphocytic leukemia.

Carsten Niemann, MD, PhD, a chief physician, and head of Laboratory at the Rigshospitalet Copenhagen University Hospital, discusses notable data on patient survival outcomes, as well as the impact of minimal residual disease (MRD) in the peripheral blood from the phase 3 GLOW trial (NCT03462719) in patients with chronic lymphocytic leukemia (CLL).

The main goal of the phase 3 GLOW study was to examine progression-free survival (PFS) in patients treated with a fixed duration of ibrutinib (Imbruvica) plus venetoclax (Venclexta) vs chlorambucil and obinutuzumab (Gazyva) in the first-line setting of CLL.

When an overall survival benefit was seen in this patient population, it came as a surprise due to the fact that there are many viable next-line treatment options for patients, Niemann begins. Moreover, a majority of patients who were receiving treatment with chlorambucil and obinutuzumab received a BTK or BCL-2 inhibitor in subsequent lines of therapy, Niemann explains. These data indicate that lower survival outcomes should not be attributed to a lack of access to next-line treatment, but rather should be attributed to a lack of effective upfront therapy options, Niemann explains.

Treatment for patients with BTK and BCL-2 inhibitor combination regimens, this may correlate with undetectable MRD levels and superior PFS. 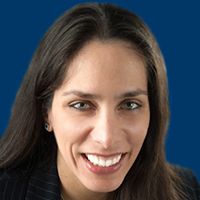