In unresectable stage III disease, a dearth of progress had been made prior to the read out of the phase 3 PACIFIC trial, said Zosia Piotrowska, MD, MHS. In the study, patients who had not progressed on definitive platinum-based chemoradiation were randomized 2:1 to 10 mg/kg of durvalumab every 2 weeks for up to 1 year (n = 476) or placebo (n = 237).

“The take-home is that we saw continued, maintained marked OS benefit when patients received adjuvant durvalumab following the completion of concurrent chemotherapy and radiation,” Piotrowska, a medical oncologist at Massachusetts General Hospital and an assistant professor at Harvard Medical School, said in a presentation during a 2020 Institutional Perspectives in Cancer webinar on lung cancer.

“The overall population did benefit from durvalumab, and it’s hard to draw conclusions from this post-hoc analysis particularly given the small number of patients that fell into the less than 1% subgroup,” said Piotrowska.

With that said, adjuvant durvalumab should be considered for all patients with stage III NSCLC who complete chemoradiation with the exception of patients with oncogenic drivers, such as EGFR, underlying autoimmune conditions, and immunosuppression.

In the resectable setting, the ADAURA trial was the focus of attention at the 2020 ASCO Annual Meeting. The phase 3 study randomized patients with completely resected stage IB to IIIA EGFR-mutant NSCLC with or without prior chemotherapy to 80 mg of osimertinib once daily or placebo for up to 3 years.

Following a recommendation from the International Data Monitoring Committee, the study was unblinded early due to efficacy. The results of the unplanned interim analysis demonstrated a significant improvement in DFS with osimertinib. Specifically, the EGFR TKI led to a median DFS that was not reached (95% CI, 38.8-not calculable) versus 19.4 months with placebo (95% CI, 16.6-24.5), reflecting an 83% reduction in the risk of disease progression or death (HR, 0.17; 95% CI, 0.12-0.23; P < .0001).2 The 3-year DFS rates were 80% and 28%, respectively.

“This benefit in DFS was maintained across stages, and it was even higher in the stage III patients with a hazard ratio of 0.12. We’re very curious whether we’ll see an OS benefit with adjuvant osimertinib,” said Piotrowska.

The drug was also well tolerated despite the occurrence of skin and gastrointestinal toxicities, which were generally low grade, said Piotrowska.

In December 2020, the FDA approved osimertinib as an adjuvant therapy for patients with NSCLC whose tumors have EGFR exon 19 deletions or exon 21 L858R mutations, as detected by an FDA-approved test, following tumor resection.

During the live program and following the presentation of the data, Piotrowska asked the viewers whether they would prescribe adjuvant osimertinib, to which more than half (52%) said they would.

“At our institution, all of us are enthusiastic about these data. Of course, we would like to see more data, but we do think it’s compelling and it looks like many in the audience agree,” said Piotrowska.

Similarly, neoadjuvant therapy is under study in the Lung Cancer Research Foundation LEADER trial (LCMC4) in which 1000 patients with early-stage disease will be tested for 10 targetable alterations, and those with an appropriate target will receive a neoadjuvant TKI.

Will you offer adjuvant osimertinib for patients with EGFR+ NSCLC based on ADAURA? 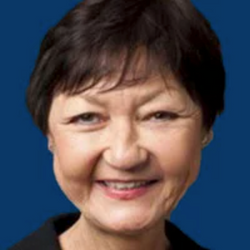 Dr. Majem on the Safety Profile of Osimertinib in EGFR+ NSCLC
x