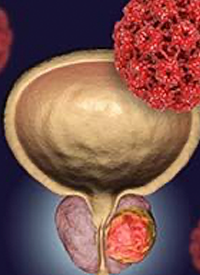 Investigators recruited adult men at 7 institutes in the United States. Eligible patients had histologically confirmed adenocarcinoma of the prostate, primary treatment with radical prostatectomy, and freedom from prior malignancies for at least 3 years (with the exception of nonmelanoma skin cancers and superficial urothelial cancers). Pathological Gleason score had to be 8 to 10 or Gleason 7 with either pT3 (extracapsular extension or seminal vesicle invasion) or R1 disease (positive margins). Patients were also required to have node-negative disease (pN0) at the time of surgery and no radiographic or clinical evidence of local/regional tumor recurrence.

Patients had to have nonmetastatic disease (M0) on a CT of the abdomen and pelvis and whole-body radionuclide 99Tc bone scan or sodium fluoride PET scan within 3 months of study entry. Patients could not have received prior hormonal therapy (luteinizing hormone-releasing hormone agonist, antiandrogen, or both), and serum testosterone was greater than 150 ng/dL.

Patients were also required to have evidence of PSA relapse after prostatectomy, defined as one rise in PSA above the baseline value greater than or equal to 0.05 ng/mL. Other eligibility factors included ECOG performance status of 0 to 1, and life expectancy of at least 3 years.

The primary outcome measure was FFPP, defined as the time from random assignment to the date of PSA progression or if there was no progression at the time of analysis, the last PSA measurement.

Investigators documented no local recurrences and only 1 metastasis event at the time of analysis, which did not represent enough events for reporting. In the enzalutamide arm, 1 patient died due to pancreatic cancer, and another patient died of unknown causes. In the placebo arm, 2 patients developed other cancers (1 had glioblastoma multiforme and 1 had squamous cell carcinoma of the tonsil), but there were no deaths.

There were 3 grade 3 adverse effects (AEs) in the enzalutamide arm (nocturia, lymphopenia, and back pain), but no AEs higher than grade 3 were reported. Seven patients in the placebo arm experienced grade 3 AEs, consisting of erectile dysfunction, fall, humerus fracture, hypertension (n = 2), nocturia, and back pain.