The FDA has approved brigatinib for the first-line treatment of patients with ALK-positive metastatic non–small cell lung cancer, as detected by an FDA-approved test.

The FDA has approved brigatinib (Alunbrig) for the first-line treatment of patients with ALK-positive metastatic non—small cell lung cancer (NSCLC), as detected by an FDA-approved test.1

The approval is based on the phase III ALTA-1L trial, in which treatment with brigatinib demonstrated a 51% reduction in the risk of disease progression or death compared with crizotinib (Xalkori) in patients with advanced ALK-positive NSCLC who had not received a prior ALK inhibitor.

"Results from the ALTA-1L trial add brigatinib to the very short list of first-line treatment options for ALK-positive lung cancer patients that have proven to be superior to crizotinib. Compared to crizotinib, brigatinib demonstrated superior efficacy, especially among those with brain metastases at baseline, and a low pill burden, at one pill a day, which is an important factor when we could be controlling disease for years," said Ross Camidge, MD, PhD, Joyce Zeff Chair in Lung Cancer Research, University of Colorado Cancer Center. "These data have established brigatinib's potential in the first-line setting, and I’m confident the FDA approval will open a new window of possibilities for physicians and their patients."

The 2-year investigator-assessed results, which were presented during the 2019 ESMO Asia Congress, showed that brigatinib led to a 76% (HR, 0.24; 95% CI, 0.12-0.45) reduction in the risk of disease progression or death in newly diagnosed patients who had brain metastases at time of enrollment.

With the 2-year follow-up data, the trial’s results were evaluated and reported by study investigators as well as a blinded independent review committee (BIRC). At the data cutoff for the second interim analysis, which was June 28, 2019, results showed that by BIRC assessment, there was a 51% reduction in the risk of disease progression or death with brigatinib over crizotinib (HR, 0.49; 95% CI, 0.35-0.68; log-rank P <.0001).

In the international, open-label, comparative, multicenter, phase III ALTA-1L trial, investigators compared the efficacy and safety of brigatinib with crizotinib in 275 patients with stage IIIB/IV ALK-positive NSCLC who have not received prior treatment with an ALK inhibitor, but may have received ≤1 prior regimen of chemotherapy in the advanced setting.

The median age was 59 years, and 55% of patients were female. Twenty-nine percent had brain metastases at baseline with comparable pre-enrollment central nervous system (CNS) radiotherapy rates among both cohorts. Overall, 27% of patients had prior chemotherapy in the locally advanced or metastatic setting.

Patients on the brigatinib arm also experienced significant improvements in health-related quality of life (HRQoL). Brigatinib led to a delayed median time to worsening in Global Health Score (GHS)/QoL score (≥10 point worsening in score) by 27 months versus 8 months with crizotinib.

Brigatinib is currently approved by the FDA for the treatment of people with ALK-positive metastatic NSCLC whose disease has progressed on or were intolerant of crizotinib.

Dr. Messersmith on the Potential for Trastuzumab Deruxtecan in HER2+ CRC 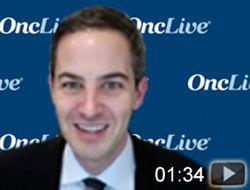 Dr. Corr on the Rationale to Evaluate WNT Inhibition in Gynecologic Cancers