Almost single-handedly, Jennifer Temel, MD, defined a research field in medicine, creating a new focus on quality of life for patients and survivors. 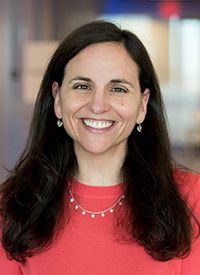 Jennifer Temel, MD, has a calming demeanor and an easy laugh. It is easy to see how patients feel comforted in her presence, although she shared that she feels most at ease when with small groups of people. A truly gentle spirit, she is a lifelong vegetarian, something she now shares with her older son, and despite her nearly career-defining blood phobia, she is an avid fan of Buffy the Vampire Slayer.

"Jennifer Temel singlehandedly defined a field of research in medicine,” said her mentor, Thomas J. Lynch Jr, MD, president, director, and Raisbeck Endowed Chair of Fred Hutch Cancer Center. “Early in her career she was troubled by the disconnect between cancer care and caringfor patients—particularly at the end of life. Her book of work has redefined how we optimally integrate palliative care and psychosocial support for cancer patients—starting from the time of diagnosis.”

When Temel first began her professional efforts in palliative care and research, the field was more of a concept than a reality. “At the time I sort of started as a faculty member, 20 years ago, we did not have palliative and supportive care research—it just didn’t exist,” Temel said. “It really felt like forging a new field.”

Today, she runs a research program at Massachusetts General Hospital called the Cancer Outcomes Research and Education (CORE) program, which employs more than 20 investigators and 30 research staff across a variety of interdisciplinary specialties, including oncologists, psychologists, palliative care clinicians, nurses, and occupational and physical therapists.

“We’re doing research across the cancer trajectory,” shared Temel. The topics range from “cancer prevention, [to] people living with disease, [to] patients who will ultimately pass away from their illness or become survivors.”

Temel is particularly happy that the research conducted at CORE is no longer limited to patients with lung cancer, where her work originated. Today, palliative care research extends across multiple specialties.

“We now have clinical trials across all the cancer areas. Our research program has grown to include patients with hematologic malignancies, gastrointestinal cancers, breast cancer,” she said.

“It is wonderful to see the group grow and do such amazing work. It is [initially] hard when you’re building a program out of nothing, but now our research program is thriving.”

She is grateful to Lynch, who won the Giants of Cancer Care® award for lung cancer in 2013, for helping her recognize the significance of her research and encouraging her to follow clinical investigation as a career.

“Even though it was not what he studied, he saw the value of it and supported me in ways that not many people would have back then,” she said.

Unlike many of her colleagues, Temel does not descend from a long line of medical providers. For the most part, she has blue-collar roots.

“I did not grow up with a lot of resources, which has shaped a lot of who I am today,” she said. “A lot of doctors come from doctor families and from a long line of working professionals, so they do not necessarily have the ability to relate to being in different environments and being around different types of individuals—which I do.

“I cannot imagine not being a caregiver. I always wanted to be a physician, [since] I was a small child,” Temel exclaimed. She admits, however, that there was a time when she doubted if she would be able to make it.

“As I got older, I started to develop this fear of blood. I can’t stand the smell of it. The metallic smell just totally bothers me,” she said. “When I was in college, I was like, ‘I can’t be a doctor.’ And I switched away from being pre-med.”

She actually had given up on her hopes of becoming a physician when she found herself working in a laboratory post graduation. Fortunately for the field, after a couple of years of working in this setting, she decided that, if she could just get through medical school, she could specialize in a field where she wouldn’t have to be looking at blood every day.

Temel has always been fascinated with the humanistic component of medicine. She admits that she has felt envious of her psychology colleagues’ ability to help patients cope. Therefore, it should not be a surprise that Temel’s research was centered around improving not just the physical but also the psychosocial wellbeing of her patients.

Temel published her groundbreaking study on integrative palliative care, “Early Palliative Care for Patients With Metastatic Non–Small-Cell Lung Cancer,” in 2010. At the time, palliative care was generally reserved for later in the disease course and for patients who had been admitted to specialized inpatient units or were receiving consultation for uncontrolled symptoms.

Patients assigned to the experimental group met with a member of the palliative care team, which included board-certified palliative care physicians and advanced practice nurses, within 3 weeks of enrollment and at least monthly thereafter in the outpatient setting until death.

The findings astonished many of Temel’s colleagues. Not only did patients who received early palliative care services have improved quality of life, but they also achieved superior progression-free survival (11.6 vs 8.9 months, P = .02).

“[This] landmark study [showed] that the group assigned to palliative care had better symptom management scores and emotional scores, and they lived 3 months longer,” remarked Jose A. Contreras, MD, chair of the Institute of Pain and Palliative Medicine at NJ’s Hackensack Meridian Health. “And that is a very, very powerful thing.”

Oncology has adjusted to make palliative care more available. According to the Center to Advance Palliative Care, 83.4% of hospitals offered a palliative care program in 2020 compared with 59.6% in 2008. Nonetheless, Temel said the field of palliative care is still largely underrecognized across the cancer sphere.

On the other hand, she countered, the strides in recent years have been remarkable. “It’s wonderful to see supportive and palliative care highlighted in medical school and training, and to see junior faculty who are interested in it,” Temel said.

She recognizes that numerous barriers still exist, and that naturally integrating palliative care into tumor specialties presents challenges. She cites large conferences, such as the American Society of Clinical Oncology Annual Meeting, as an example for potential growth.

“We have our lung cancer sessions, [but] the supportive care is separate,” she noted. “It is not so clear how to integrate all these topics and disseminate information.”

As cancer care becomes more complex, Temel said, it is important for physicians to learn to lean across specialties and gain insights from those with different research interests. A lung cancer specialist might learn a great deal about immunotherapy from a melanoma-specializing colleague, for instance, and topics like geriatrics care, survivorship care, and palliative care are a few key examples of how supportive efforts need to be disseminated into other aspects of clinical research.

“We need to evolve as a field to make sure that we are all as knowledgeable as possible about all aspects of caring for a patient with cancer, not just their cancer therapy,” she said.

Despite numerous accomplishments in research, Temel’s greatest professional accomplishment is her dedication to her patients as a provider. She recognizes that spending 2 days a week in the clinic taking care of patients is a little unusual for someone so far along in a research career. However, she believes strongly that interacting with patients and their families makes her a better investigator. More to the point, it’s the part of the job she looks forward to the most.

“Science is great and research is great, but that was never my primary pull into oncology,” Temel explained. “I just love taking care of patients and getting to know their families and caring for them during their lung cancer trajectory. It continues to be one of the most important parts of my career.”

When asked about her greatest nonprofessional accomplishment, Temel will be the first to tell you that it is not her golf game.

“We are a big golfing family,” she said, laughing. Her husband, Alex, a lawyer who popped by to give his wife a live update of an ongoing tournament, and their 2 sons, Jason, 21, and Drew, 19, are all golf fanatics. The younger men have been playing since they could walk, and many family vacations involve chasing down the most exciting golf courses across the globe.

Temel claims to be the least skilled of the 4, but she is grateful to have something to share with her sons because they have no intention of becoming physicians.

“No doctors,” she joked. “My husband went to law school and business school, so they are clearly both taking after him.”

Beyond golfing, she is passionate about all things zombie and vampire and is a huge fan of The Walking Dead. And although she enjoyed the Twilight films, she claims they will never surpass television’s Buffy the Vampire Slayer.

“That was the best ever,” Temel exulted. “Nothing will ever be better.”