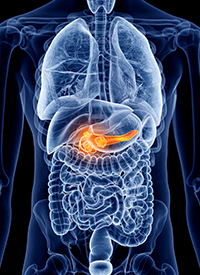 The regimen was also found to significantly improve progression-free survival (PFS) vs nab-paclitaxel and gemcitabine. The toxicity profile of the investigative combination proved to align with what had been reported in a prior phase 1/2 study.

In light of the news, Ipsen announced plans to file a supplemental new drug application seeking the approval of the regimen in this patient population in the United States.

“The positive results from the NAPOLI 3 trial demonstrate that compared with the standard of care, the investigation Onivyde treatment regimen extended the lives of people living with metastatic PDAC who were previously untreated,” Howard Mayer, executive vice president and head of research and development for Ipsen, stated in a press release.

Previously, the combination of liposomal irinotecan and 5-FU/leucovorin was approved by the FDA for use in patients with metastatic PDAC after progression with gemcitabine-based treatment.2 The regulatory decision was supported by findings from the phase 3 NAPOLI-1 trial (NCT01494506), in which the regimen significantly prolonged survival vs 5-FU/leucovorin alone (HR, 0.67; P = .012).3

Data from an ongoing phase 2 study (NCT02551991) exploring the NALIRIFOX regimen in patients with previously untreated, locally advanced or metastatic PDAC indicated that the combination had encouraging antitumor activity in the frontline setting.4 With NAPOLI-3, investigators set out to further evaluate the safety and efficacy of the regimen in this setting.

The open-label, randomized, multicenter, phase 3 trial enrolled patients with a histologically or cytologically confirmed adenocarcinoma who had not received prior treatment.4 An initial diagnosis of metastatic disease must have happened up to 6 weeks prior to screening and patients were required to have at last 1 metastatic tumor that was measurable via CT scan or MRI.

Patients also needed to be at least 18 years of age; have an ECOG performance status of 0 or 1 both at the time of screening and in the week prior to randomization; and acceptable hematologic, hepatic, and renal functions.

Exclusion criteria included having received prior treatment, having only localized advanced disease, a history of central nervous system metastases, clinically significant gastrointestinal disorders, a history of any second malignancy in the past 2 years, or neuroendocrine or acinar pancreatic carcinoma.

Stratification factors include performance status (0 vs 1), region (North America vs East Asia vs other), and the presence of liver metastases (yes vs no).

“The prognosis for people diagnosed with pancreatic cancer is extremely poor and we plan to submit these new findings to the regulatory authority as, if approved, we believe this regimen could offer up an important new treatment option for people living with an aggressive and hard-to-treat cancer,” Mayer added in the press release.1

Data from NAPOLI 3 will be shared at an upcoming medical meeting.1