Ahmed O. Kaseb, MD, discusses important considerations in the frontline treatment of patients with advanced hepatocellular carcinoma, the potential for targeted therapy in the space, and ongoing research with immunotherapy in earlier stages of disease. 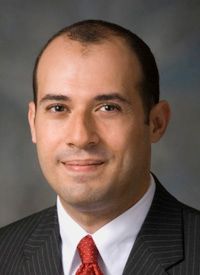 The treatment of patients with advanced hepatocellular carcinoma (HCC) is slated to become more personalized with immunotherapy and targeted therapy, according to Ahmed O. Kaseb, MD, and ongoing efforts are focused on moving these approaches into earlier lines of treatment to further improve outcomes.

Currently, sorafenib (Nexavar) and lenvatinib (Lenvima) are approved for use in the frontline setting. In January 2020, a supplemental biologics license application (sBLA) was submitted to the FDA for the combination of atezolizumab (Tecentriq) and bevacizumab (Avastin) for the treatment of patients with unresectable HCC who have not received prior systemic therapy.

The sBLA was based on data from the phase III IMbrave150 trial, in which the median overall survival was not reached with the combination versus 13.2 months with sorafenib (HR, 0.58; 95% CI, 0.42-0.79; P = .0006).1 Patient-reported outcomes data presented at the 2020 Gastrointestinal Cancers Symposium showed large and consistent benefits with the combination, further speaking to its clinical benefit in this patient population.2

If the combination is approved, it will be an important addition to the armamentarium, explained Kaseb, allowing for greater personalization to a patient’s risk factors and comorbidities.

“The choice between which agent to start with really depends on 2 major factors. First is the patient's overall liver condition as well as underlying liver disease and portal hypertension manifestations, such as severe varices,” said Kaseb. “Another factor is the comorbidities of the patient. Patients who have autoimmune disease, for example, are going to avoid immunotherapy. In patients with skin diseases, [severe] gastrointestinal symptoms, or [large] tumor burden, TKIs could pose more risk on quality of life.”

Seeking to capitalize on the success of immunotherapy in the advanced setting, investigators will also evaluate perioperative immunotherapy strategies in earlier-stages of disease in combination with targeted therapies for druggable targets such as TGF-β and STAT3, said Kaseb.

In an interview during the 2020 OncLive® State of the Science Summit™ on Gastrointestinal Malignancies, Kaseb, a professor in the Department of Gastrointestinal Medical Oncology, Division of Cancer Medicine, at The University of Texas MD Anderson Cancer Center, discussed important considerations in the frontline treatment of patients with advanced HCC, the potential for targeted therapy in the space, and ongoing research with immunotherapy in earlier stages of disease.

OncLive: How do you approach frontline treatment for patients with advanced HCC?

Kaseb: Currently, we have 2 TKIs, sorafenib and lenvatinib, approved and another combination with anti—PD-L1 and anti-VEGF [on the horizon]. In my practice, I always start by categorizing the liver function status of my patient and the degree of portal hypertension. I order an upper endoscopy to look at the varices and make sure they are not large enough to be banded before therapy. Then, based on all of these factors, the patient and the treating physician reach a mutual decision.

How could the approval of atezolizumab plus bevacizumab impact the use of sorafenib and lenvatinib in this space?

I believe sorafenib and lenvatinib will still play a role. In my presentation, I discussed whether there is a correlation between risk factors and response to therapy. I presented data from a meta-analysis that was published in the Journal of Clinical Oncology in 2017. The analysis looked at all phase III studies with sorafenib and showed a trend toward improved survival and outcomes in patients with hepatitis C—related HCC. If I start with atezolizumab and bevacizumab in a patient who has a history of hepatitis C and they progress, I could go back to sorafenib because of its potential increased efficacy.

However, if a patient has a history of hepatitis B, I would lean more towards lenvatinib, cabozantinib (Cabometyx), or another second-line agent because lenvatinib has shown benefit in patients with hepatitis B. It's really going to depend on what we start with, as well as the patient’s risk factors.

The field is going to evolve faster than we think, and we're going to [have to decide between] more doublets. Down the line, we’re going to see [even more studies]. For example, one study is evaluating pembrolizumab (Keytruda) plus lenvatinib. Another study is evaluating atezolizumab plus cabozantinib, as well as durvalumab (Imfinzi) and tremelimumab. Many studies are ongoing, and we expect to have early read outs of those results by the end of next year. [Hopefully] we’re going to have more options available for our patients.

Could you discuss the toxicity profile of the atezolizumab/bevacizumab combination?

[We saw expected] adverse events [in both arms of the IMbrave150 trial]. We saw more gastrointestinal and skin manifestations with sorafenib, whereas we saw more bleeding episodes, hypertensive episodes, and proteinuria with the combination. We really have to weigh the risk-benefit ratio, the patient’s comorbidities, and the tumor burden to select which regimen to start with.

Could you expand on the contraindications of the combination?

[I would avoid the combination] in patients who are already on treatment with steroids or an immunosuppressive medication, such as those with advanced rheumatoid arthritis or autoimmune disease, even autoimmune hepatitis. When I'm in doubt, I get a consultation. In general, it depends on the severity [of the disease] and whether or not a patient is receiving treatment for it.

Where is the field headed in terms of treatment?

Not only are we going to have more options with immunotherapy and targeted therapy, but [we’re going to be] moving immunotherapy and targeted therapy into earlier stages of HCC. [No matter what the stage], the goal is to prolong survival. We're not going to achieve cure anytime soon. However, if we move these treatments into earlier stages of disease, such as in the neoadjuvant or adjuvant settings, we may be able to prevent or reduce the risk of recurrence.

At The University of Texas MD Anderson Cancer Center, we have started a study with perioperative immunotherapy, and we showed a nice signal in terms of pathologic complete response at the time of surgery and major necrosis. We expect [these responses] to [lower recurrence rates] after surgery. This is going to evolve very fast; we are going to see immunotherapy and targeted therapy move into the perioperative, neoadjuvant, and adjuvant settings.

[We’re also going] to [see] combination strategies of immunotherapy with targeted therapy and local therapy. We’re going to see a wave of local therapies as well, such as ablation, transarterial chemoembolization, or Yttrium-90. The field is going to benefit from the achievements we’ve made in the advanced setting and [we can now begin to translate it] to early HCC.

If these agents move into earlier-line settings, where does that leave the metastatic treatment landscape?

FGF inhibitors and TGF-β inhibitors are being evaluated. Whether they are an option depends on the molecular profile of the tumors. Tumors with advanced cirrhosis tend to have molecular alterations in TGF-β. Some studies have looked at RAS [alterations]; the challenge is that a smaller percentage of patients [have that alteration]. The overall percentage [of those with these molecular alterations] is less than 5%. One study in Asia examined [the use of] RAS inhibitors, [which were used in] 1% [of the 2000 patients screened]. When it comes to molecular therapies, this is a challenge. When it comes to TKIs and different mechanisms of actions, that's where we can see more benefit because it's a downstream effect that could really augment the effect of immunotherapy.

All of these druggable targets, such as TGF-β or STAT3, have a link to immune suppression. If we combine those agents with immunotherapy, we can really synergize the effect of immunotherapy. At The University of Texas MD Anderson Cancer Center, we have a study that will be open next year, in which we will be looking into STAT3 inhibitors plus checkpoint inhibitors, in the hope of bringing more novel agents into the space and to address resistance mechanisms to immunotherapy.

Is there anything else you would like to emphasize?

As a physician who specializes in HCC, I always advise my colleagues to address the 2 conditions that we always face. Whenever I see any patient, either up front or [in follow-up], I don't only assess the tumor status and response versus progression. I also assess the underlying liver disease. We always have to look at the liver function status and weigh the risk-benefit ratio because some patients actually live longer [without treatment]. Some patients [may have a shorter lifespan] because of complications related to systemic therapy. I always try to achieve a balance when it comes to treating patients with HCC.