A total of 51 patients treated with the chemotherapy regimen of docetaxel at 75 mg/m2, carboplatin (AUC 6) 3 times weekly, and trastuzumab at a 4 mg/kg-loading dose followed by 2 mg/kg once weekly. At a median follow-up of 4.5-years, the overall survival (OS), disease-free survival (DFS), and distant disease-free survival (DDFS) rates were 94.18%, 82.35%, and 90.2%, respectively. Of the 21 patients who experienced a pathologic complete response (pCR), the OS rate was 100%.

The mean age of diagnosis was 55 years, 68.6% had ER-positive tumors, 39.2% presented with grade 3 disease, and 49% were node-positive. Patients were monitored by ultrasound and then underwent surgery following 6 cycles of the TCH regimen. Trastuzumab was still administered to these patients 3 times weekly up to 1 year after surgery.

Earlier studies examined the effects of neoadjuvant treatment with TCH and how it is as effective as anthracycline-containing regimens, though survival data had not yet been published, explains lead study author Hans-Christian Kolberg, MD. The median follow-up results, he added, are commensurate with results from the HERA and BCIRG 006 studies, which looked at the efficacy of trastuzumab in the adjuvant setting.

OncLive: Can you give an overview of this study and the follow-up data?

In an interview with OncLive, Kolberg, doctor of Medicine, Marien Hospital Bottrop in Bottrop, Germany, discusses these updated results and the impact they may have on the treatment paradigm for HER2-positive breast cancer.Kolberg: After we learned about the results of the BCIRG 006 study, which compared an anthracycline-containing regimen with docetaxel, carboplatin, and trastuzumab in the adjuvant setting, we were interested to see if that works in the neoadjuvant setting, too. This is because we believe that the sooner the tumor gets the antibody, it is better for the patient. We did not want to wait for surgery, but the other paradigm is that, we are treating any patient we know will need chemotherapy in a neoadjuvant fashion. Only in situations where we did not know the patients had cancer, or there were unexpected findings of the postoperative histology, they would receive adjuvant therapy. All other patients, where we only needed immunohistochemistry or grading, would receive their treatment in a neoadjuvant fashion. That is why it was important for us to test TCH in that setting, because the data from the adjuvant treatment trial were so good for patients.

Neoadjuvant therapy is not only an academically interesting idea to test chemotherapies and the effective therapies, but it is also simply doing the same thing before surgery as what you are doing in the adjuvant setting. That is opening a diagnostic and prognostic window for the patient, because if she has a pCR, we can talk about her prognosis, which is a lot more information than we have if we just apply adjuvant chemotherapy and just wait to see if she responds or not. That is why we treated patients in the neoadjuvant setting. We have presented the pCR rates, such as the classically neoadjuvant data 4 years ago, and now we have the 4.5-year follow-up. You realize there are limited data on neoadjuvant chemotherapy with TCH and there have been two or three studies that have been presented.

One of these studies has been fully published, but there is no outcome data in the end. We decided to do a follow-up, and we identified 51 patients where we had a full follow-up. The outcome data that we found compared favorably to the known outcome data for adjuvant trials with trastuzumab. The patient group we have been treating is a classical neoadjuvant group with several grade 3 patients. Fifty percent of the patients were node-positive, and of course, all of them were HER2-positive, and 60% to 68% were ER-positive.

Before we started neoadjuvant therapy, we did an axillary diagnosis such as a sentinel biopsy or core biopsy for patients with clinically suspect lymph nodes. The tumors were marked with titanium clips and then patients received 6 cycles of docetaxel and carboplatin with trastuzumab. After that, we did surgery and, in the cases of involved lymph nodes, the axillary dissection took place after the neoadjuvant chemotherapy.

We found a pCR rate of around 50%; however, what is even more important is that we found 26 patients who had involved lymph nodes and 71% of these patients conversed to nodal-negative after therapy. This is even more prognostically important than the pCR in the breast. If we look at the outcome data, we see that patients who achieved a pCR had an OS rate of 100% after 54 months. No patients died. It was the same with all patients who had involved lymph nodes. If you look at the risk criteria of these patients, it is a high-risk group. In a high-risk group, even nodal-positive patients had an OS of 100%, and that is really favorable for the patients.

What were some of the limitations?

What can a community oncologist take away from these findings?

What was a little stunning was that the ER-positive patients did extremely well, which was not expected. We would have expected these patients to maybe need an anthracycline or a longer therapy, perhaps eight cycles instead of six cycles. Still, their OS was around 98%, and the other survival data, such as disease-free survival, were also excellent. If we compare our data to the DFS and OS rates from the HERA or BCIRG 006 studies and, still, our data after 54 months are better than the data from these trials.Of course, there are limitations. It is a small patient group, it is a retrospective analysis, and you cannot compare that with trials such as HERA or BCIRG 006. Still, it is a signal that TCH is effective in the neoadjuvant treatment for HER2-positive patients and can definitely be used as a standard of care. It is a strong signal that docetaxel- and carboplatin-containing regimens without anthracyclines should be the chemotherapy backbone, in my opinion, for studies on dual blockade with pertuzumab and trastuzumab. There is one phase II study that did that, known as the TRYPHAENA study. There is no outcome data yet, but the pCR rates in that group were the highest in that study. The FDA accelerated approval in the United States for pertuzumab occurred 2 years ago, but we have only just approved it in Europe 6 or 8 weeks ago. Now, in my institution, the standard chemotherapy regimen for HER2-positive patients, will be docetaxel, carboplatin, and dual blockade with pertuzumab and trastuzumab.In daily practice, we can take away the fact that many patients with HER2-positive disease do not need an anthracycline. That is so important, because trastuzumab and anthracyclines are both cardiotoxic, but the cardiac toxicities of anthracyclines are irreversible, whereas the cardiac toxicities of trastuzumab are reversible. If you stop the therapy, the heart recovers again. If you can spare patients this double problem for the heart, I think that is really a benefit for them.

You mentioned the fact that ER-positive patients having a survival benefit in this study surprised you. What other findings took your team by surprise?

Do you envision this as being part of the future treatment plan for HER2-positive disease?

Secondly, many patients with HER2-positive disease will, in the later course of the disease, will have a progression or metastasis. You still have the anthracycline to treat them; you don’t fire it away with neoadjuvant therapy. It is absolutely feasible; we did not have to omit one cycle in those 51 patients. We observed no grade 3/4 toxicities. There was no case of cardiomyopathy. It is a tolerable treatment, highly effective, and saves the heart.In general, the good numbers surprised me a little. I did not expect to find 100% of patients who were nodal-positive before in a high-risk group to be alive after 4 years. The good figures were stunning. Then, it was surprising to see how some subtypes were doing, especially the ER-positive group, because I would have expected them to be a little worse than the ER-negative group. This is because we think that these patients need longer therapy, such as eight cycles of therapy. In our group of more than 51 patients, the ER-positives did extremely well.I believe that it will consist of the combinations of taxanes and carboplatin with HER2-directed therapy, whatever that may be. It is possible to apply this therapy and start with trastuzumab immediately. Approximately 2 or 3 years ago, we learned that it is possible to give anthracyclines and trastuzumab at the same time, but this is something rather new. In older studies and in daily practice, many oncologists are treating the patients with epirubicin and cyclophosphamid (EC) without trastuzumab, and then start with trastuzumab when paclitaxel is starting. Personally, I do believe it is crucially important that the patient receives trastuzumab as soon as possible. Although we know that it is possible to give the patient anthracyclines and trastuzumab together now, it is even easier if you do it without using an anthracycline, and you are saving the heart. 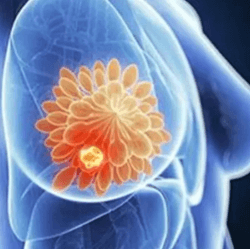 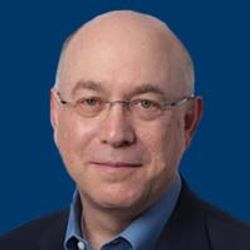