More than three times as many patients with transplant-ineligible newly diagnosed multiple myeloma remained alive and progression free after >3 years when they received daratumumab (Darzalex) in addition to standard first-line therapy. 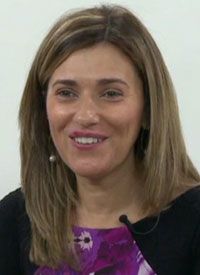 Maria-Victoria Mateos, MD, hematologist and director of the Myeloma unit at the University Hospital of Salamanca

More than three times as many patients with transplant-ineligible newly diagnosed multiple myeloma (NDMM) remained alive and progression free after >3 years when they received daratumumab (Darzalex) in addition to standard first-line therapy, according to updated safety and efficacy findings from the randomized ALCYONE study.

Patients treated with daratumumab plus bortezomib (Velcade), melphalan, and prednisone (D-VMP) had an estimated 42-month progression-free survival (PFS) of 48% compared with 14% for patients treated with VMP. The estimated overall survival (OS) was 75% and 62% for the D-VMP and VMP arms, respectively. The initial objective response rate of 91% at 16.5 months did not change after 40 months of follow-up.

The incidence of grade ≥3 treatment-emergent adverse events (TEAEs) was similar between treatment groups with the exception of higher rates of pneumonia (13.0% vs 4.2%) and hypertension (5.5% vs 1.7%) in the daratumumab arm. No new safety signals emerged with longer follow-up in the ALCYONE trial, as reported at the 2019 ASH Annual Meeting.

“D-VMP continued to demonstrate a significant PFS benefit versus VMP alone,” said Maria-Victoria Mateos, MD, of University Hospital of Salamanca in Spain. “Responses with D-VMP continued to deepen over time from the primary analysis, with improvements in rates of CR and MRD (minimum residual disease) negativity.”

The multicenter global ALCYONE trial involved 706 patients with NDMM who were ineligible for stem-cell transplantation. They were randomized to 9 cycles of D-VMP (n = 350) followed by monthly daratumumab until disease progression or to 9 cycles of VMP without maintenance therapy. The primary endpoint was PFS.

Dr. Mateos reported safety and efficacy results from ALCYONE after an additional 12 months of follow-up (40.1 total). As of data cutoff June 24, 2019 all patients in the VMP arm had discontinued or completed nine cycles of therapy. In the D-VMP arm 42% of patients continued to receive daratumumab monotherapy.

At the primary analysis, almost four times as many patients had MRD-negative status with D-VMP (22% vs 6%). After 40.1 months of follow up, the MRD-negative rate was 28% with D-VMP and 7% with VMP. D-VMP also led to higher rates of sustained MRD negativity. Both attainment of MRD negativity and persistence of negativity (≥12 months) were associated with improved PFS, said Mateos.

Patients assigned to D-VMP also had significantly prolonged PFS on subsequent therapy (PFS-2). The estimated 42-month PFS-2 was 68% with D-VMP and 50% with VMP, representing a 45% reduction in the hazard for progression or death (P <.0001). The median time to subsequent therapy had yet to be reached in the D-VMP arm versus 25.9 months for the VMP arm, representing almost a 60% reduction in the hazard ratio (P <.0001).

“Based on the PFS2 results, longer survival outcomes are projected with other daratumumab-based regimens in the frontline setting,” said Dr. Mateos.

The 13% absolute difference in estimated 42-month OS represented a 40% reduction in the mortality hazard in favor of D-VMP (P =.0003). As with PFS, OS was significantly better for patients who attained MRD-negative status and sustained MRD negativity.

The rate of discontinuation associated with TEAEs was 6.9% with D-VMP and 9.3% with VMP. Invasive secondary primary malignancies occurred in 4.9% of patients in the daratumumab group versus 4.5% of patients randomized to VMP. Grade 5 (fatal) TEAEs occurred in 6.9% of the D-VMP arm and 5.6% of the VMP arm.