Susan N. Chi, MD, discusses the rationale for using tazemetostat in pediatric patients with INI1-negative rhabdoid tumors, as well as the future steps being taken with this treatment.

This phase I study of the EZH2 inhibitor was presented by lead investigator Susan N. Chi, MD, who said that the findings have led to a phase II trial. Forty-six patients were treated with 7 dose levels in this dose-escalation portion of the phase I trial, ranging from 240 mg/m2 to 1200 mg/m2 of tazemetostat given twice daily.

Moreover, results showed that 3 patients had a complete response (CR), 1 had a partial response, and 5 had stable disease.

Additional enrollment in this study was halted by the FDA in April 2018 after the manufacturer of the agent, Epizyme, provided a safety update detailing a pediatric patient with advanced poorly differentiated chordoma who developed a secondary T-cell lymphoma.

OncLive: Can you provide an overview of the study?

In an interview with OncLive, Chi, director, Pediatric Neuro-Oncology and Clinical Trials, Dana-Farber Cancer Institute, discussed the rationale for using tazemetostat in this pediatric population, as well as the future steps being taken with this treatment.Chi: I have a particular interest in patients with atypical teratoid rhabdoid tumors (ATRTs), which are very rare central nervous system tumors. This is a tumor that is distinct, in that it only has one specific mutation in its DNA in this gene called INI1 or SMARCB1. There are other tumors that have a very similar type of mutation, and those are rhabdoid tumors of the kidney and rhabdoid tumors of the soft tissues. Other tumors types include epithelioid sarcoma, renal cell medullary carcinoma, and chordomas.

We worked with the folks at Epizyme and looked at their drug tazemetostat. It is an EZH2 inhibitor. This biologically makes sense because EZH2 is part of a multiunit complex called polycomb repressive complex 2. This complex works antagonistically to the SWI/SNF complex, of which INI1 is a member. When INI1 is knocked out in tumors, it unbalances this antagonistic relationship—such that EZH2 is more “on,” leading to subsequent cell proliferation. Tazemetostat inhibits that particular signal along that pathway.

What is the design of this trial?

This is the first time that this drug has been used in children, and it is the first time EZH2 inhibition has been tested in children, as well. We have collaborated with multiple institutions and investigators, along with Epizyme, to work on this phase I study in children.This is what they call a Rolling 6 design, which means that, at any given time, up to 6 children will be enrolled onto the dose-escalation phase. There are 2 phases—dose escalation and dose expansion. We completed the dose-escalation phase, which we started at a relatively lower dose, and continued to escalate until there was either intolerance to the medication, or biologically with regard to pharmacokinetics and pharmacodynamic measurements—which indicated we were hitting our target. We reached a dose measurement of 1200 mg/m2, by which all of those criteria were met. We are now currently in the dose-expansion phase.So far, we know that this is a very well-tolerated medication. The types of side effects that we see are nausea, vomiting, and very little in the way of bone marrow suppression, which is very important for these children who have previously had a very intensive regimen of chemotherapy drugs and radiation therapy.

Can you discuss the next steps?

Were there any preclinical data with this agent?

What would you like oncologists to take away from the early findings of this study so far?

Unfortunately, we have seen 1 side effect recently, which was a secondary malignancy. We are currently investigating this and currently working it up to see what both the relationship is, and how we might be able to prevent this in the future.Now that we have a recommended phase II dose of 1200 mg/m2 divided twice daily, we are now stratifying according to the individual's disease. We have 1 cohort of patients with ATRT, 1 cohort of malignant rhabdoid tumors, another cohort of any other INI1-negative tumors, and 1 cohort that is strictly for the tablet usage. Since this drug was made for children, it is a liquid formulation, but we also needed to test the tablet formulation.In terms of the preclinical experience, there is the mouse or animal models that have been used. This was particularly tested in juvenile and adult rats. There have been other indications in the laboratory that this was a bona fide biologic target for these types of tumors. There is a wealth of adult experience, as well.What is encouraging is that we have actually seen several responses in this phase I study, and that is not as commonly seen as it is in a phase II type of study where one is looking for efficacy. The fact that we saw several responses, including CRs, is really quite encouraging.

Secondly, in a rare tumor type like rhabdoid tumors or INI1-deficient tumors, the fact that a company would invest their time, energy, or money for a small pediatric study is really encouraging. We can complete a small pediatric experimental study in a relatively quick turnaround time. 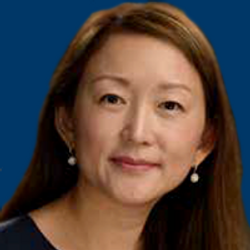