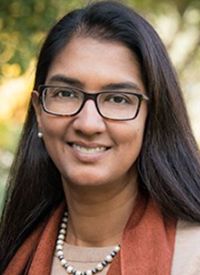 Tanya Siddiqi, MD, an associate professor and director of the Chronic Lymphocytic Leukemia Program at City of Hope

At a median follow-up of 11 months, 18 (81.5%) of the 22 patients evaluable for efficacy had a response, including 45.5% who had a complete response (CR) or a CR with incomplete blood count recovery as best overall response, reported Tanya Siddiqi, MD, principal investigator of TRANSCEND CLL 004’s site at City of Hope.

There were 9 patients who failed both ibrutinib and venetoclax (Venclexta). Among these patients, the overall response rate was 89% (8 of 9 patients) with 67% (n = 6) achieving a CR as best response.

“Clinical responses were rapid, improved over time, and were deep and durable,” said Siddiqi.

“CR and undetectable MRD rates remain somewhat inadequate in the relapsed setting, especially when monotherapy is used,” said Siddiqi. “Patients who progress on novel therapies have poor outcomes. So, effective therapies are still needed for patients with relapsed disease, especially those who have failed both BTK inhibitors and venetoclax.”

Liso-cel is an investigational CD19-directed, defined composition, 4-1BB CAR T-cell therapy that is given separately at equal target doses of CD8+ and CD4+ CAR+ T cells. “If you have a defined composition of product with low variability in the CD8+ to CD4+ ratio, you could potentially have not only lesser toxicity down the line but also more predictable toxicity,” Siddiqi said.

TRANSCEND CLL 004 enrolled 23 patients with relapsed/refractory CLL or SLL who were ineligible for or previously failed BTK inhibitor therapy. Patients with high-risk disease were candidates for the trial if they had failed ≥2 prior therapies. Those with standard-risk disease were required to have failed ≥3 prior therapies. All participants had an ECOG performance status of 0 to 1.

The median patient age was 66 years, 47.8% were male, and 34.8% of patients had bulky disease. Almost three-fourths (73.9%) of patients received bridging treatment while the CAR T-cell product was being manufactured and 83% had high-risk features, including a complex karyotype (48%), del(17p; 35%), and/or TP53 mutation (61%). The patients had received a median of 5 (range, 2-11) prior lines of therapy, and all had received prior ibrutinib.

Both BTK inhibitor therapy and venetoclax had failed in 39% of patients. This cohort’s baseline characteristics were similar to the overall group of patients.

One patient developed Richter’s transformation before CAR T-cell administration and was excluded from the efficacy analysis. This patient achieved a CR as best response.

Fifteen (68%) of the 22 patients had a response by day 30. Six (27%) of the responses deepened over time, including 3 patients who went from a partial response (PR) to a CR, 2 of whom did not achieve a CR until 1 year. Ten (83%) of 12 patients who achieved a CR or PR at 6 months remained in response at 9 months; “now 8 are out a year or more maintaining or actually improving upon their response,” said Siddiqi. Of the 15 patients who achieved undetectable MRD in the peripheral blood, 12 (80%) maintained their responses, and the 3 who did not progressed with Richter’s transformation.

Treatment-emergent adverse events (TEAEs) of any grade at either dose level occurred in all patients; grade ≥3 occurred in 96% of patients. Some 74% of patients had cytokine release syndrome (CRS) of any grade, and 9% had grade-3 CRS. There were no cases of grade-4 or -5 CRS. More than one-third (39%) of patients had neurologic events, “but only 5 had grade-3 or -4 neurotoxicity and no grade-5 neurotoxicity,” she said. Three-fourths (75%) of patients received tocilizumab and/or steroids to manage CRS and neurologic events. Early intervention with tocilizumab and steroids was instituted to manage toxicities. “These particular CAR T-cell—related side effects were fairly similar in the double-refractory subgroup of patients,” she said.

Patients with higher tumor burden as measured by the sum of product diameters (SPD) of target lymph nodes appeared to be more likely to develop neurotoxicity. All 9 patients with any grade of neurologic event had SPD values >15. High early phase interleukin (IL)-16 and tumor necrosis factor (TNF) levels were also significantly associated with the development of neurologic events. IL-16 and TNF levels directly correlated with lymph node tumor burden.

The findings justify the phase II portion of the study, which is enrolling patients at dose level 2, said Siddiqi.