Bradley J. Monk, MD, FACS, FACOG: Let’s transition. I think all of us have been part of the bevacizumab program. Having discussed these 2 very exciting frontline PARP inhibitor maintenance trials, PRIMA and VELIA, why don’t you just use both at the same time?

Bradley J. Monk, MD, FACS, FACOG: That was prospectively tested in the third pivotal paper here in the Presidential Symposium at ESMO [European Society for Medical Oncology Annual Congress 2019]—adding olaparib in the maintenance phase once bevacizumab was started. This was a randomized phase II trial done in Europe, where bevacizumab was approved sooner. That’s why it was exclusively a European trial. Bevacizumab according to the label is for 15 months, or 21 doses. After the 6 cycles of chemotherapy and 5 doses of bevacizumab, patients were randomized to 300 mg twice daily of olaparib for 2 years. They got some bevacizumab.

Bradley J. Monk, MD, FACS, FACOG: They got both drugs for a period, and then olaparib. It’s a very interesting idea. Interestingly, the primary end point in that study was ITT [intent to treat], not HRD [homologous recombination deficiency] or BRCA. It’s weird that you would have a PARP inhibitor trial and not have an HRD or BRCA end point. I don’t really get it. Maybe they were confident that it was going to work in everyone, and I guess it did. The hazard ratio was 0.59, confidence interval 0.49-0.72 with about a 6-month improvement. I like the ITT concept, but we’re past that. We’re just beyond that. What happens is that when there’s such a dramatic effect in the BRCA patients, it drags it with it.

Bradley J. Monk, MD, FACS, FACOG: I’m not sure that the ITT is the right end point. Katie, tell us about some of the other end points here in PAOLA-1.

Kathleen Moore, MD: PAOLA-1 is both the easiest and the hardest study to discuss because it has only 1 end point that’s prespecified, and you just gave those results. It is intriguing in that, unlike the other 2 studies, it has an active comparator as the maintenance. That already changes the bar for your hazard ratio because this group is not getting placebo or anything where you know how they’re going to perform. They’re getting a drug that we know works well—perhaps not as well as PARP inhibitors but pretty well. That changes things. When you look at the subgroups, which are completely exploratory—and we have to keep reemphasizing that—they look pretty reasonable here, when you think about it. If you look at the group that you’ve been interested in—this BRCA wild type, HRD-positive—the hazard ratio is 0.43. You get 12 months.

Kathleen Moore, MD: You get a year. I know where I’d want my patients to be. Is that just the PARP inhibitor effect? If you look at the PRIMA analysis, you go from 8 to 20, so that’s about 12 months too. It’s similar. Is it just the PARP inhibitor, or is the BEV [bevacizumab] additive? We can’t answer the question. I don’t know that we can interpret this without a single olaparib arm, but 0.43 is pretty nice.

Robert L. Coleman, MD, FACOG, FACS: Yes, everything looks nice. I think the addition here is, getting back to that patient we started with, if you had a situation where, when you started the treatment, you said, “This is a patient I want to give BEV [bevacizumab] to”…

Bradley J. Monk, MD, FACS, FACOG: Yes, if they’re large volume or I don’t have the HRD back.

Robert L. Coleman, MD, FACOG, FACS: What this is saying is, now we’ve teed up this patient because she hasn’t progressed. She’s up here now at the decision point of maintenance, and now you’ve got choices for that. You can continue BEV [bevacizumab], or you can add the PARP inhibitor, olaparib.

Robert L. Coleman, MD, FACOG, FACS: That’s right. Based on our GOG-0218 experience and knowing what arm 2 did in GOG-0218, you wouldn’t have started that unless…

Bradley J. Monk, MD, FACS, FACOG: This is what this whole thing is about.

Kathleen Moore, MD: This whole panel. You made the point earlier about the difference between VELIA and these other 2. You’re making the decision at the beginning.

Kathleen Moore, MD: OK, because I don’t want to withhold something until maintenance.

Kathleen Moore, MD: How do you get maintenance? It’s because you respond. Most patients respond to front line, but some don’t, which you just brought up. If I start BEV [bevacizumab], I’ve increased my likelihood that I’m going to get everybody into a robust response, so they can benefit from BEV [bevacizumab] or a PARP inhibitor—whichever I pick. This tells me it’s safe to use the combination. I think the discontinuation rate was 20%, which means we need to look carefully at the others. It’s a little higher.

Kathleen Moore, MD: Yes. Do you want to use both drugs? We know that in the United States, we can use bevacizumab again and it works just as well.

Bradley J. Monk, MD, FACS, FACOG: Which is an important distinction from Europe.

Bradley J. Monk, MD, FACS, FACOG: The Europeans will not be able to use bevacizumab after bevacizumab, but we can.

Bradley J. Monk, MD, FACS, FACOG: I don’t even want any of that conversation. If we use it front line, we can’t use it at recurrence. You had a comment, Michael.

Michael J. Birrer, MD, PhD: Yes. I just wanted to bring the attention to the HRD group, which I think is interesting. We’ve now shifted back to the 0.42 cutoff.

Michael J. Birrer, MD, PhD: I think it explains some of the differences between the studies.

Michael J. Birrer, MD, PhD: The other thing I would say is, there’s a long legacy of using combinations compared with single agents.

Michael J. Birrer, MD, PhD: It’s not the right study, because what you really want to test is sequential use of the single agent.

Michael J. Birrer, MD, PhD: We need it to be compared with the single agent, but no one ever does that study, and it will never be done.

Robert L. Coleman, MD, FACOG, FACS: I’m going to publicly say I think Mike Bookman of Arizona Oncology has been fighting for this study for years. I’m going to put it on tape that he’s been wanting us to do that. He wants to control that next line, as well. He wants to put the sequence into play. I’ve got to credit him for wanting to do this. It’s just been hard to get somebody to step up to the plate and do it.

Bradley J. Monk, MD, FACS, FACOG: It’s not hard; it’s impossible. Anyway, Shannon, I’m getting better at this—taking exploratory end points, doing cross-trial comparisons, and making a definitive conclusion. I’m getting better. It’s not my style. The non-BRCA HRD in PRIMA was 0.5. I’m not going to talk about the medians, because it was a very high-risk group.

Bradley J. Monk, MD, FACS, FACOG: In that same HRD non-BRCA population in PAOLA, it was 0.43. Are you at least tempted to use both drugs?

Bradley J. Monk, MD, FACS, FACOG: You’re tempted. I’m not asking for, “Oh, I’m going to use it all the time,” but tempted gives the flavor. Go ahead.

Shannon N. Westin, MD, MPH: What I was going to say is, for me, it’s going to be the group that I’m giving BEV [bevacizumab] to up front already. Once I start BEV [bevacizumab], I don’t like to stop it if I don’t have to, because I feel as though you keep getting that benefit. It’s working, and she’s tolerating it. Now I feel good about adding olaparib to that patient’s regimen. I feel like that patient is really going to benefit. It’s exploratory, but exploratorily, I feel good about it. 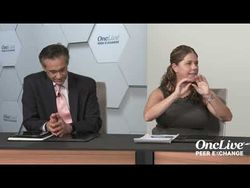 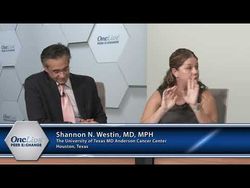 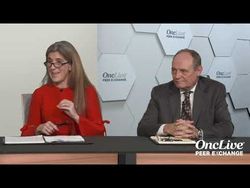