Bradley J. Monk, MD, FACOG, FACS, discusses the promise of new therapies and regimens in patients with ovarian cancer in the recurrent setting. 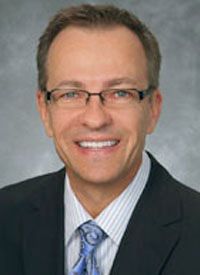 Bradley J. Monk, MD, FACOG, FACS, professor and director of the Division of Gynecologic Oncology at Creighton University School of Medicine at St. Joseph’s Hospital and Medical Center in Phoenix

Currently, standard frontline treatment for patients with recurrent ovarian cancer is a chemotherapy regimen of carboplatin and paclitaxel. Beyond the success with PARP inhibitors, though, novel strategies are under investigation, including an antibody-drug conjugate and a gemcitabine analog, said Bradley J. Monk, MD, FACOG, FACS.

“It makes no sense to tell a patient with newly diagnosed ovarian cancer—which is almost uniformly lethal&mdash;that we’ll try carboplatin and paclitaxel and see what happens,” said Monk. “It’s like diving out of an airplane without a parachute.”

In a presentation on clinical trials in recurrent ovarian cancer during the 2018 OncLive® State of the Science SummitTM on Ovarian Cancer, Monk, director of the Division of Gynecologic Oncology at Creighton University School of Medicine at St. Joseph’s Hospital and Medical Center, Arizona Oncology, discussed the promise of new therapies and regimens in the recurrent setting.

For example, the PD-L1 inhibitor avelumab (Bavencio) plus talazoparib is currently being investigated in the phase II JAVELIN Ovarian 100 study, while the PD-1 inhibitor nivolumab (Opdivo) plus rucaparib (Rubraca), which is being looked at in the ATHENA trial, will soon open for enrollment. Moreover, the FIRST trial is evaluating TSR-042, a PD-1 inhibitor, plus niraparib (Zejula). Olaparib (Lynparza) and durvalumab (Imfinzi) are being combined in the MEDIOLA study.

“If we do not get new agents, we will not win,” explained Monk. “We have heard about PARP inhibitors, we have bevacizumab—we have all of these opportunities. But, what’s next?”

The answer to that, according to Monk, is immunotherapy and antibody—drug conjugates. During his presentation on recurrent disease, Monk homed in on the trials of 2 agents, mirvetuximab soravtansine (IMGN853) and a first-in-class nucleotide analogue NUC-1031 (Acelarin).There are 2 ways that folate can get into the cell, Monk explained. One is through a receptor, and the other is through a channel. The channel transports most of the folate, but the receptor is highly expressed in ovarian cancer, he said. This means that making an antibody that will bind to the overexpressed folate receptor on the ovarian cancer cell can be effective.

Mirvetuximab soravtansine, which has been studied in this space, is a folate receptor alpha-targeting antibody-drug conjugate.

“On the back of the antibody, there is a microtubule-active drug, DM4, and we can selectively deliver high concentrations to the cancer,” said Monk.

Mirvetuximab soravtansine was well tolerated in a phase I study of heavily pretreated patients with platinum-resistant recurrent ovarian cancer, which was published in the Journal of Clinical Oncology.1 Results showed that the objective response rate (ORR) with the antibody—drug conjugate was 26%. For patients who previously received 1 to 3 prior lines of therapy, the ORR was 39%; if patients’ tumors were high expressers of the folate receptor, the ORR was 44%.

In the group of patients from the phase I pooled expansion cohort who were eligible for FORWARD I, results showed that the confirmed ORR was 47% (95% CI, 30%-65%), including 1 CR and 16 PRs.

“This drug works. I am not sure that it is necessarily better than chemotherapy—that is going to take some statistical analysis&mdash;but this is definitely an active agent in our hands. It is also a wonderful opportunity for patients with platinum-resistant recurrent ovarian cancer [for whom] PARP inhibitors don’t work and they have failed bevacizumab,” said Monk. “Hopefully this will be the next FDA-approved drug that we have in the clinic.”NUC-1031 is a gemcitabine analog that is transporter-independent, not susceptible to deamination, and does not have to get phosphorylated. It is highly potent at the biochemical level, Monk said.

In a phase I study of NUC-1031 in combination with carboplatin in patients with recurrent ovarian cancer, results demonstrated that, in the intent-to-treat population, the disease control rate was 93%, with 1 RECIST complete response (7%) 2 partial responses (13%), and 11 stable diseases (73%).3

With the studies of mirvetuximab soravtansine and NUC-1031, there is an opportunity for every patient with platinum-resistant recurrent ovarian cancer to enroll on a clinical trial, Monk emphasized.

“You have to keep looking,” said Monk. “If you don’t look, you may not find it.”