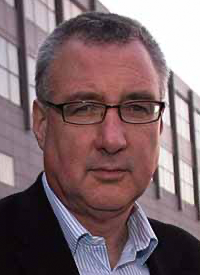 Although the addition of lapatinib (Tykerb) to a standard preoperative chemotherapy regimen of trastuzumab (Herceptin), docetaxel and carboplatin (TCHL) did not improve response rates in patients with early-stage HER2-positive breast cancer, its significant effect on relapse-free survival (RFS) indicates that anti-HER2 TKI regimens may still have value in the neoadjuvant space, according to John Crown, MB, BCh, BAO, BSc, MD, MBA.

“This is not a practice-changing study, [but] I hope [it supports] continued investigation [regarding] how to best harness the potential of the anti-HER2 TKIs,” said Crown, lead study author and professor at University College Dublin and Dublin City University, consultant medical oncologist at St. Vincent’s Private Hospital, and chairman of Molecular Therapeutics for Cancer Ireland in Dublin.

In an interview with OncLive® regarding his presentation, Crown discussed previous research with anti-HER2 TKIs in HER2-positive breast cancer, expanded on key follow-up data from this phase 2 trial, and emphasized the importance of continued investigation into this underutilized combination.

OncLive®: What activity has been previously observed with the use of neoadjuvant docetaxel and carboplatin in HER2-positive breast cancer?

Crown: When we started this study approximately 10 years ago, there was great interest in [using] anti-HER2 TKIs as adjuncts to trastuzumab, which [already] had a well-established role in the treatment of early-stage HER2-positive breast cancer. [As a result,] several large studies were done in [both] the adjuvant and neoadjuvant settings. The ALTTO study [NCT00490139] did not show a benefit from the addition of the first-generation TKI lapatinib to trastuzumab and conventional chemotherapy in the adjuvant setting. Somewhat more complicated results emerged from the Neo ALTTO trial [NCT00553358] where preoperative lapatinib plus trastuzumab [was compared with] trastuzumab or lapatinib alone. In that study, no clear advantage was seen [with lapatinib] in terms of progression-free survival, although there were data suggesting that patients who had achieved a pathological complete response had superior survival.

Please discuss the rationale for investigating the addition of the anti-HER2 agent lapatinib to carboplatin and docetaxel.

We started our study because we felt that the docetaxel and carboplatin chemotherapy backbone needed to be explored with HER2-directed agents. A large amount of preclinical data suggested that this was a very rational chemotherapy combination to give in terms of its anti-cancer effect. [Moreover, this data suggested] that [the regimen] would not [be associated with] the risk of cardiac toxicity that one would see with a trastuzumab and anthracycline-containing regimen. The other advantage of our regimen was that maximum doses of chemotherapy and HER2-directed therapy [could be] administered from day 1 of treatment.

Is there anything you would like to note regarding the trial design?

This was a relatively small study done within the Republic of Ireland. In our study, we originally randomly assigned patients to 1 of 3 groups: chemotherapy with trastuzumab, lapatinib, or a combination [of both]. [However], other data came out [and] suggested that lapatinib was inferior to trastuzumab, so we discontinued that arm. The analysis was done on the other two arms, [which included 76] patients.

What key follow-up data were shared at SABCS 2022?

We did not meet our primary end point, which was augmented pCR rate. [This result] wasn't simply [because] the study failed, [but because] the control arm did much better than we [predicted]. Approximately 50% of patients achieved pCR in both study arms, so it was hard to prove that lapatinib was superior in that regard. However, longer-term follow-up analysis did [reveal] a statistically significant [improvement] in RFS for patients who received neoadjuvant lapatinib. Again, all these patients completed a year of adjuvant trastuzumab following their surgery. [Further] study is required [to understand] why a regimen which did not produce a change in pCR did produce a statistically significant difference in RFS.

What other research in HER2-positive breast cancer stood out to you from the meeting?

Interestingly, a similar [but] somewhat larger study done by my colleague Sarah Hurvitz, MD, of UCLA Jonsson Comprehensive Cancer Center, [was reported at SABCS]. Dr Hurvitz also reported very high rates of pCR in both arms of her trial with trastuzumab and lapatinib. Indeed, if you look at [all] 4 arms across the 2 studies, the pCR rate is approximately 50%. [This] tells us that we may have understated what the pCR would be with optimal chemotherapy and trastuzumab alone.

What developments still need to occur to understand the role of anti-HER2 TKIs in the neoadjuvant treatment of HER2-positive disease?

The field has been changed by the introduction of pertuzumab [Perjeta]. A direct head-to-head comparison of [adverse effects] would be [necessary] to really [gain] perspective on where these agents would fit [in the current landscape]. Lapatinib is known to cause GI toxicity, and we did see GI toxicity in our study. In fact, we saw one patient with a perforated diverticulum later [successfully] recover. In general, diarrhea was more common. The use of routine prophylactic anti-diarrheal [medications] will reduce the frequency of diarrhea with anti-HER2 TKIs, but they do need to be used with some caution.

What is your key take-home message regarding the implications of this research?

Collectively, the field may have slightly neglected the development of anti-HER2 TKI drugs. There has been so much interest in and exciting data for newer antibody-drug conjugates, but I believe there is [still] a role for [TKIs] which needs to be explored. Quite a bit of mechanistic research has gone into working out different mechanisms of resistance to trastuzumab and the TKIs. [We need to use] these [mechanisms] to improve treatment for our patients with HER2-positive disease.