Donald W. Northfelt, MD, MS, FACP, discusses the progress made with CDK4/6 inhibitors in the treatment of patients with ER-expressing breast cancer and pivotal trials that have moved the needle forward. 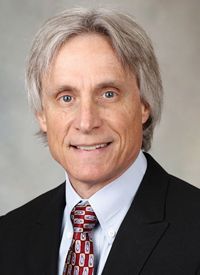 CDK4/6 inhibitors have clinically significant value in the treatment of patients with metastatic estrogen receptor (ER)–positive breast cancer, according to Donald W. Northfelt, MD, MS, who added that lessons learned from the phase 3 monarchE (NCT03155997) and RxPONDER (NCT012720337) trials have shed necessary light on which patients will benefit most from certain adjuvant approaches.

“Specific criteria were used in the study to define women as high risk, so it’s important to look at those criteria to know that you’re identifying someone who truly falls within that group and that the addition of abemaciclib [will be] beneficial,” noted Northfelt.

Additionally, data from a prespecified interim analysis of RxPONDER showed that although the addition of chemotherapy to endocrine therapy resulted in an improved 5-year iDFS of 94.2% vs 89.0% with endocrine therapy alone in premenopausal patients, these rates were 91.6% vs 91.9%, respectively, in postmenopausal women with an Oncotype recurrence score between 0 and 25 (adjusted HR, 0.97; 95% CI, 0.78-1.22; P = .82).2

“The RxPONDER results demonstrated that within an intermediate range of Oncotype DX recurrence score, there was no added value with adjuvant chemotherapy,” added Northfelt. “This information can be used to spare a significant number of women from the harm of chemotherapy with the confidence that their antiestrogen-driven therapy will be sufficient to protect them from relapse.”

In an interview with OncLive® during a 2020 Institutional Perspectives in Cancer webinar on breast cancer, Northfelt, a professor of medicine and associate medical director of the breast clinic at the Mayo Clinic in Arizona, discussed the progress made with CDK4/6 inhibitors in the treatment of patients with ER-expressing breast cancer and pivotal trials that have moved the needle forward.

OncLive®: What are some of the recent data that have read out with the CDK4/6 inhibitor abemaciclib? What does the future look like for this agent?

The investigators reported a striking reduction in risk for relapse among women who received abemaciclib in addition to their adjuvant antiestrogen [treatment]. It’s anticipated that this is going to be a practice-changing observation. This [indication] has not yet gained FDA approval, but abemaciclib is available by prescription because it’s been approved for the treatment of [patients with] metastatic breast cancer. [This treatment], at least theoretically, is available to women by prescription, [although] there may be insurance barriers to receiving it for adjuvant treatment prior to FDA approval. It’s anticipated that this approval will be forthcoming in the near future. That usually triggers an agreement on the part of insurance companies to pay for the treatment.

An update on the monarchE trial was presented at the 2020 SABCS. What should be taken away from those data?

In terms of the monarchE study, the update at SABCS was simply to lengthen the timeline from the initial report that was made at the European Breast Cancer Conference. Investigators acknowledged that their initial report was after a very short follow-up time, and they wanted to provide longer follow-up. The reporting interval went from 15 months to 19 months. It wasn’t a very long additional interval that they reported, but the impact of abemaciclib was striking enough on the outcomes of these high-risk patients that they felt justified, and the organizers of SABCS felt justified, in having [the trial] presented again.

The MONARCH and MONALEESA trials were other important efforts that shed light on adding CDK4/6 inhibitors to antiestrogen therapy. How did these data affect the paradigm?

[Those 2 studies] were done in [patients with] metastatic disease. Their purpose was to compare conventional palliative antiestrogen treatment with the combination of conventional antiestrogen treatment plus abemaciclib, or plus ribociclib [Kisqali]. In those studies, it was shown that the addition of a CDK4/6 inhibitor dramatically lengthened the duration of disease control achieved by palliative antiestrogen therapy. Updates of these studies have been reported, further burnishing the reputation of these drugs to improve progression-free survival. [Moreover,] an overall survival advantage [has been demonstrated] with the addition of ribociclib. These findings just served to cement the use of CDK4/6 inhibitors in managing women with metastatic breast cancer.

How do you choose among the available CDK4/6 inhibitors in your own practice? Is the decision largely dependent on associated toxicities?

Comparative studies have not been done to determine whether one CDK4/6 inhibitor is necessarily better than another, so all the comparisons [that have been made] are cross-study comparisons; this is generally frowned upon when we’re trying to apply evidence to our practice. What has happened, as a consequence, is that the selection of CDK4/6 inhibitors is based more on what anticipated toxicities might be rather than on any perceived difference in efficacy.

This is not unfamiliar to medical oncologists looking for the sweet spot, which is to get the best efficacy but, at the same time, the least toxicity. We are very familiar with doing this dance with various chemotherapies and other strategies that we use.

What is the role of chemotherapy in patients with ER-positive disease who also have involved axillary lymph nodes? How are genomic analyses being used to guide who should receive it?

In in the 21st century, we are primarily using genomic analyses to make determinations about the value of chemotherapy as an adjuvant or neoadjuvant strategy in [patients with] localized breast cancer. When we encountered a patient with resectable breast cancer but who happened to have lymph node involvement, the old practice was to simply count the number of lymph nodes and use that to judge the degree of risk or concern that we had for the patient; we would then make a chemotherapy prescription based on that [information]. That strategy could have been applied in the 19th century because they knew how to count lymph nodes then, as well. However, with the dawn of the 21st century, and the advances made in genomic analysis, it became possible for several platforms to be developed in which genomic analyses could more precisely indicate the biologic nature of the cancer.

These analyses have been refined with statistical techniques to allow us to make predictions about the effectiveness of chemotherapy for a given genomic profile. I would say that many people in practice who are of my generation remember always using anatomic features of the disease, such as the size of the primary cancer in the breast and number of lymph nodes involved in the axilla, as the primary means to identify those who would theoretically benefit from postoperative chemotherapy to reduce risk of relapse. However, there is a big change occurring in the field, where the use of genomic analyses is increasingly being applied to make these determinations, and it’s becoming somewhat less relevant to use the old-time anatomic considerations.

Now, an effort has been made to bridge the gap by creating calculations in which the clinical features and the anatomic features are blended with the genomic information to derive a more precise estimate of risk for relapse and a more meaningful prediction about the benefit of chemotherapy. I’m sympathetic to those efforts to blend the old with the new, but I also have a sense that we understand more powerfully the biology of the cancer when we rely on the genomic analyses to guide us. None of these approaches are perfect. We still end up giving chemotherapy to women who may not require it, and we still may not give chemotherapy to some women who would benefit from it, regardless of which of these strategies we apply. In the future, it’s going to be more of a molecular decision-making, and less of an anatomic decision-making, process that we undertake.

Did data from the RxPONDER trial provide any clarification with regard to using genomic analysis to inform chemotherapy decisions?

When I’m talking to patients, I try to emphasize that I don’t believe this is a negative; it’s a positive. I say, “What we learned from the genomic analysis was that your cancer will be controlled and that your risk of relapse will be lowered sufficiently with adjuvant antiestrogen therapy. In other words, there’s no added benefit from chemotherapy and we know that there’s the potential for harm, so let’s skip it.” Most women are very pleased to hear that kind of message.