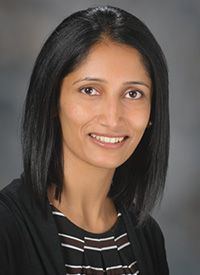 Neeta Somaiah, MD, an assistant professor in the Department of Sarcoma Medical Oncology at The University of Texas MD Anderson Cancer Center

For example, LV305, which is a modified, third-generation, nonreplicating, integration-deficient lentivirus-based vector designed to selectively transduce dendritic cells in vivo, was evaluated in 39 patients with previously treated, advanced NY-ESO-1—positive solid tumors and limited tumor burden in a phase I study led by Somaiah and researchers. The agent induces expression of the NY-ESO-1 cancer testis antigen in dendritic cells, promoting immune responses against NY-ESO-1–expressing tumors.

The agent was administered every 3 weeks via intradermal injection in 4 dose cohorts; 24 patients had sarcoma. Results showed that the overall disease control rate (DCR) was 56.4%; specially in those with sarcoma, the DCR was 62.5%. One patient with synovial sarcoma had a partial response (PR) lasting more than 36 months. Regarding safety, treatment-related adverse events were grade 1 or 2 and included fatigue (49%), injection site reactions (46%), and myalgia (21%).

In addition to this research, studies continue to explore the use of immunotherapy and targeted therapy as well as identifying other corresponding biomarkers in sarcomas.

“As we make advances with targeted therapies against certain mutations, we have to keep researching to find how the drug works, why it stops working, the mechanisms of resistance, and how to delay emergence of that resistance upfront,” said Somaiah. “We can probably work with better combination therapies or choose a better drug up front to delay that emergence of resistance in sarcomas.”

In an interview with OncLive, Somaiah, an assistant professor in the Department of Sarcoma Medical Oncology at The University of Texas MD Anderson Cancer Center, discussed ongoing research in the field of sarcoma.

OncLive: What are some ongoing research efforts in sarcoma?

Somaiah: There is a lot of work in different sarcoma subtypes. Gastrointestinal stromal tumor (GIST) is a category of soft tissue sarcomas with a lot of ongoing research in the different subtypes. There is a whole field of immunotherapy in sarcomas, and that is being investigated with different means. There are a lot of vaccine strategies ongoing for sarcomas as well as T-cell receptor (TCR) or adoptive T-cell based technologies used for certain types of sarcoma that are exciting. The community should stay tuned because these therapies might be useful in certain subtypes of sarcoma in the future.

We also have a lot of targeted therapies that are being targeted toward the molecular physiology of each of those subtypes, like with the recent approval of tazemetostat (Tazverik) in epithelioid sarcoma, which is an EZH2 inhibitor. There are other subtypes of sarcoma that might have the same pathway in play, where epigenetic modulators or other drugs that modulate the epigenetics of these tumors might actually have efficacy. There is a broad range of ongoing trials in sarcoma that hit on each of these different subtypes and different pathways.

What are some therapeutic advances in sarcomas?

Over the last year, there have been advances in desmoid fibromatosis, which is a unique type of sarcoma. It's not a sarcoma because it's not considered malignant, but it falls under the sarcoma category. It's a morbid disease because you could have local progression, but desmoid tumors do not metastasize. These patients are usually very young and have an altered quality of life because of morbidity from this disease.

In the last few years, we have developed targeted agents for patients with desmoid fibromatosis that have shown great response. It started with sorafenib (Nexavar), which, in a large phase III study compared with placebo, showed efficacy in terms of an increased response rate. Even placebo-treated patients responded in the sense that you do have to understand the biology of this disease. Most patients might not need treatment and you can just follow them. Only those patients who actually progress need to go on therapy.

We have newer drugs like nirogacestat (PF-03084014), which is a gamma secretase inhibitor; this agent is being examined phase III study. It attacks the basis of these desmoid tumors in decreasing fibroblast deposition; it has shown responses and is fairly well tolerated. We also have β-catenin inhibitors. β catenin is overexpressed in most desmoid tumors because of the mutation that they express. We have a β-catenin inhibitor that is in a phase I trial of desmoid tumors.

In the last few years, we've had GIST trials showing great responses in patients with certain subtypes of GIST. We recently had avapritinib approved for PDGFRA exon 18—mutant GIST; this includes the majority of the PDGFRA D842V—mutated patients who did not have any approved therapy in the past. Now, we have this drug that shows great responses, which is pretty akin to what imatinib (Gleevec) does for KIT-mutant GIST in the frontline setting.

We also have a new drug called ripretinib (DCC-2618), which had phase III data reported out in the fourth-line setting versus placebo after patients had progressed on all available standard agents, showing a very encouraging progression-free survival and overall survival advantages as well as good response rates. We hope to have that new drug on the market later this year.

Alveolar soft part sarcoma (ASPS) is another rare type of sarcoma where we had no approved agents or therapies that worked. We now know that immunotherapy works great with a more than 50% response rate for ASPS. Immunotherapy is quickly becoming one of the most commonly used frontline therapies for newly diagnosed patients. They also respond to targeted therapies like cediranib. There is a new drug called anlotinib in clinical trials right now, which is also showing very good results with ASPS.

For the other subtypes of sarcoma or high-grade sarcomas, chemotherapy seems to be the basis of our treatments. We have more options through clinical trials to try and look for better therapies.

The other important area for specific subtypes of sarcoma is the area of adoptive T cells for synovial sarcoma and potentially myxoid/round cell liposarcoma. The initial trials showed T cells directed against NY-ESO-1, which is a cancer/testis antigen with more than 80% expression on these sarcoma subtypes and are able to induce responses in more than 50% of patients. The durability of the response is not always that long lasting and more research needs to be done to improve responses after these T-cell infusions.

It's very exciting to see that you can actually induce tumor regressions by directing T cells against NY-ESO-1. As more research is being done, additional antigens, such as PRAME and MAGE-A4, are also showing similar results and are also highly expressed in patients with synovial sarcoma and myxoid/round cell liposarcoma. Those trials will be interesting to watch.

It's tricky because there it is only a subset of patients that will be eligible for those trials. The trials are HLA-specific, meaning only HLA-A*02 subtypes would be eligible for those treatments right now. Further, a patient's tumor needs to express the antigen. As we research this more, there may be a way of developing TCR-based technologies against specific antigens for most sarcomas in the future.

You led a phase I study on the first-in-class, first-in-human study of LV305 in NY-ESO-1—positive sarcoma, as well as other solid tumors.

This neat platform was a lentiviral vector, meaning that instead of having the T cells be generated outside of the body or against NY-ESO-1, an immune response is being generated in the body by injecting this lentiviral vector with the entire RNA sequence of NY-ESO-1, which is tropic to dendritic cells. Dendritic cells can present in the immune system and generate an immune response.

LV305 mostly generates CD4 T-cell response that can recognize different epitopes or different segments of the NY-ESO-1 protein. The hope is that those T cells can then hone to the tumor where they can recognize these NY-ESO-1—positive tumor cells, and then initiate an immune response with those CD4 T cells.

In the first-in-human study that we did, we saw that patients who were injected with LV305 had an increase in the circulating CD4-positive T cells that could recognize various epitopes of NY-ESO-1. We had 1 patient with synovial sarcoma who had a PR, but that PR came 1 year after the vaccination, so it was a delayed reaction. Just as you would expect with vaccine-based technology, it takes time to generate the immune response, and then to have an effect against the tumor cells.

That product is no longer being developed by the company, which was taken over by Merck. It is currently not in testing except I have a study ongoing, which is an investigator-initiated study looking at endogenous T cells against NY-ESO-1 combined with the vaccine LV305. The hope is that if you give T cells that can kill the tumor with the initial bulk, then you can vaccinate the patient after with the LV305 and hope to have further persistence of the T cells, which is one of the biggest challenges after T cell therapy. How do we get these T cells to persist longer so responses can last longer? We will see the results of those trials show to see if we are to take that further.

The FDA recently granted a Regenerative Medicine Advanced Therapy designation to ADP-A2M4 (MAGE-A4) as a treatment for patients with synovial sarcoma. What are your thoughts on this decision?

In synovial sarcomas, NY-ESO-1 was one of the first antigens that was targeted with T-cell based technologies. The next antigen that was looked at was ADP-A2M4, which also has very high expression in synovial sarcoma as well as myxoid/round cell sarcoma. Adaptimmune has a study with a TCR that is directed against [MAGE-A4]; they saw responses in their phase I study. They are launching this large phase III study targeting synovial and myxoid round cell sarcoma with these spear T cells.

It's interesting because patients can go through their standard frontline chemotherapy. For patients with advanced synovial sarcoma or myxoid/round cell sarcoma, we check their HLA type upfront and if they have the right HLA type as they're going through their standard chemotherapy, we know that they eventually will stop because they usually don't get beyond 6 cycles of doxorubicin and ifosfamide due to toxicity. If they progress on their frontline therapy, and if they meet the criteria, their tumor gets evaluated for the antigen. If they express [MAGE-A4], then they will be eligible for the study.

As they are undergoing their chemotherapy, we take a break, schedule them for apheresis— where they have their T cells extracted&mdash;and then they can continue getting their standard therapy while their T cells are being manufactured with the TCR that targets [MAGE-A4]. Once they're done with that therapy and we know their T cells are ready, we give patients a break from their chemotherapy and bring them [into the clinic]. They get a lymphodepleting regimen and then they get their T-cell infusion. Unlike other CAR T cells, which have a higher rate of toxicity, the rate of central nervous system toxicities in these TCR-based T cells is not that high. Most patients do fairly well. We have to monitor them for some time and then they are off therapy. We are evaluating what these T cells do. Most patients actually do very well in that time, and I am hopeful for this to be a treatment in the future for more patients.