When George P. Canellos, MD, first joined the field of oncology in the 1960s, many of his peers thought he was making huge mistake. 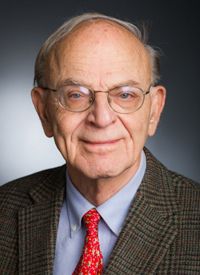 When George P. Canellos, MD, first joined the field of oncology in the 1960s, many of his peers thought he was making huge mistake.

Surgery and radiotherapy dominated the field of cancer therapy at the time. There was still much to be discovered with regard to the disease, making oncology unappealing to the majority of the medical community.

“You know, the major medical centers in this country were not interested in patients with cancer,” said Canellos. “And this field really had a hard time getting going because the medical establishment wasn’t high on it. They just didn’t think the drugs were ready, or the diseases were ready, or you name it. And they were right, partially, and wrong, partially.”

Canellos was born in Boston, Massachusetts, in 1934. He went to high school at Boston Latin School, a public exam school, public schools that require an entrance exam, established in 1635 and the oldest public school in the United States.

After graduating from Harvard College and earning his medical degree in 1960 from Columbia University College of Physicians and Surgeons in New York, New York, he originally intended to be a surgeon. However, Canellos had what he describes as “the tactical skill of a harbor seal” and quickly decided not to pursue surgery. He was also left-handed, and many of the instruments at the time were made for right-handers. So he decided to switch to internal medicine.

Canellos completed both his internship and residency at Massachusetts General Hospital, where he’d previously worked in the Department of Surgery. While a resident, Canellos was asked to write a consult for a woman with ovarian cancer who had disseminated disease. He decided to treat her with thiotepa (Tepadina), a cytotoxic chemotherapy drug used for breast and ovarian cancers and Hodgkin and non-Hodgkin lymphomas.

Canellos specified that he would administer the patient’s first dose. However, the surgical intern on the floor at the time did not read Canellos’ note and administered another dose to the patient, resulting in her receiving a double dose of thiotepa. This created a bit of a crisis for Canellos and his colleagues—until they saw that the woman was improving.

"She got up and walked out of the hospital. I mean, the abdomen became normal. Everything went away,” said Canellos. “And I was convinced, and hoped not, but I knew that [her cancer] would come back in the future. But the fact that it worked the first time so the lady could get up, symptom free, and walk out of the hospital...I was convinced the future management of cancer had to be some other way than how we were doing it then.”

This serendipitous discovery led Canellos to shift his research focus. He began concentrating on developing treatment regimens that combined oncologic drugs with other therapies.

At the same time, the Vietnam War was beginning, and medical residents were being pulled into military service through the “Doctor Draft.” However, physicians could also fulfill their obligation by joining the US Public Health Service as a commissioned officer and working at the National Institutes of Health. Canellos joined the National Cancer Institute (NCI) in 1963.

A New Frontier in Cancer Research

Canellos and his colleagues at the NCI were some of the first investigators to demonstrate that active drugs can be given in combination with other cancer therapies. Partnering with Vincent T. DeVita Jr, MD, a 2013 Giants of Cancer Care®award winner in Lymphoma, the pair developed the C-MOPP regimen (cyclophosphamide, vincristine, procarbazine, prednisone) for non-Hodgkin large cell lymphoma. Canellos and DeVita also published the first paper on the CMF regimen (cyclophosphamide, methotrexate, and 5-fluorouracil).

In the first prospective clinical trial of the CMF regimen, 184 patients with metastatic breast carcinoma were randomly assigned to receive either single-drug chemotherapy with L-phenylalanine mustard (L-PAM) or intermittent combination chemotherapy with CMF. Of the 93 patients who received the CMF regimen, 49 responded to treatment, including 14 who had complete response. The median duration of response was 25 weeks. Comparably, of the 91 patients treated with L-PAM, 18 (20%) patients showed a response. The median duration of response in that patient population was 13 weeks.

The superior antitumor effect of CMF compared with L-PAM suggested the combination was a more effective drug regimen, and that it was a viable option for adjuvant therapy. The CMF regimen became one of the first successful combination therapies for breast cancer.

“We were asked by the institution to do something for the solid tumors that were afflicting the majority of the population,” Canellos recalled. “And we developed a combination program that eventually was used internationally for the adjuvant therapy of breast cancer. Not just the advanced disease or early disease; it was used in both circumstances. And so, it was the first one that was being used.”

In 1974, Canellos was appointed to serve as the acting clinical director of the NCI. However, Dana-Farber Cancer Institute, then known as Sidney Farber Cancer Center, soon asked him to return to Boston to become its chief of medical oncology. It was an offer he couldn’t refuse, so he returned to his hometown.

Under the direction of Canellos, a team at Dana-Farber went on to establish high-dose systemic methotrexate as a treatment for advanced non-Hodgkin lymphoma (NHL) with central nervous system (CNS) involvement. The team combined high-dose methotrexate with folinic acid (MTX /FA), which resulted in improved response rates, decreased occurrence of CNS lymphoma, and prolongation of disease-free survival.

Specifically, of 20 patients with advanced NHL, 12 (60%) had an objective response, including 4 (20%) complete responses. The median duration of complete response was more than 4.5 months and the median duration of partial response was 1.5 months. Moreover, 5 of 6 patients who had CNS involvement responded to MTX-FA including 3 who had “complete disappearance” of CNS disease and 1 who remained in remission for more than 14 months.

Outside of the World of Oncology 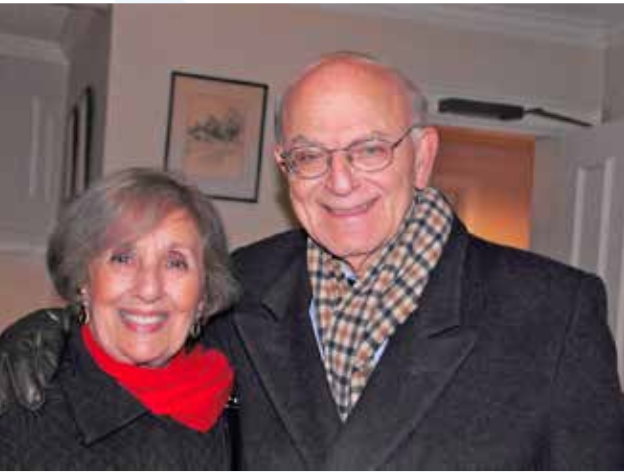 Canellos and his wife, Jean Speare Canellos, at home in 2015. They met when she was a student at Wellesley College and they’ve been married for 63 years “or something like that.”

If you ask Canellos about his greatest accomplishment, it’s not his achievements in oncology that first come to mind. It’s his family.

Canellos met his wife, Jean Speare Canellos, during his tenure at Harvard, while she was earning a degree in zoology at Wellesley College in Wellesley, Massachusetts. The pair have been married for 63 years, or “something like that,” Canellos said with a smile.

“It was romance at the first meeting...and it hasn’t left after all these years,” he said.

A charter member of the Friends of Dana-Farber Cancer Institute, the hospital’s fundraising arm and volunteer community, Jean Speare played a fundamental role in shaping Dana-Farber. She has worked with Friends in a variety of capacities over the decades, including a stint as president.

Canellos and his wife also have 3 adult sons, Peter, George, and Andrew. Canellos describes each of them as very talented and established in their own fields, saying that they take after their mother in that regard. 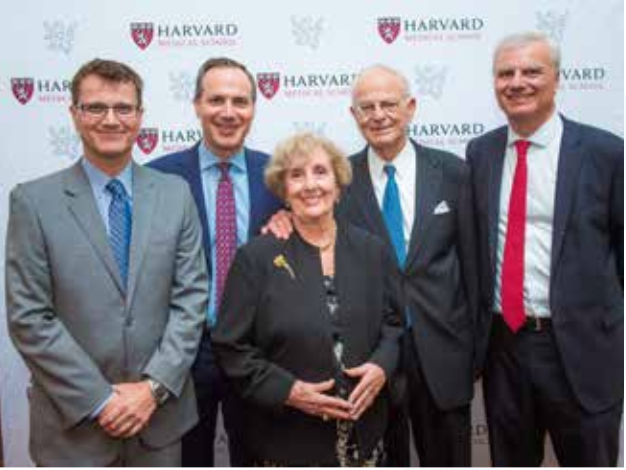 George and Jean Speare Canellos, MD, with their sons, from left, Andrew, George, and Peter in 2018 at a ceremony for the endowment of the George P. Canellos, MD, and Jean S. Canellos Professor of Medicine at Harvard and Dana-Farber.

George S. Canellos, their second-oldest son, said that his father’s career played a significant role in shaping his childhood. From family vacations centered around oncology conferences to a social circle comprised of the families of these “bold pioneers of cancer research” that his father worked with, he spent his childhood surrounded by medicine.

He noted, however, that if you met or spent a lot of time with his father, you might be surprised to learn that Canellos is a doctor. He’s an amateur historian and much more likely to talk about his hobby than engage in discussions of medicine or oncology.“

He’s a very interesting man in [that pretty soon after he starts chatting with you], he’ll be talking to you about the history of the Crusades, or Byzantium or ancient Greece, or India, rather than turning the topic to oncology,” said George S. Canellos, noting that what he admires most about his father is “his big heart.”

“I think he’s just a person you really, really want to spend time with and immediately get the sense that he cares deeply about you,” the younger man said. “And I think that’s certainly true of all his family, but it’s also true of really everyone who knows him.”

The Art of Oncology 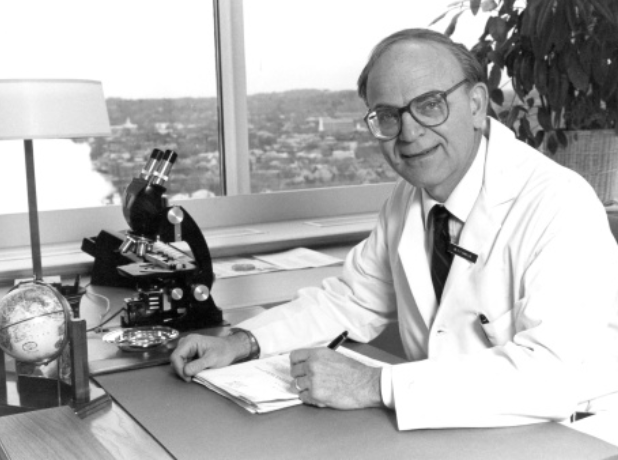 Canellos in his office at Dana-Farber. He says the best part of his job is seeing fellows and trainees develop and launch successful

Today, Canellos is still working at Dana-Farber and at Brigham and Women’s Hospital as a senior physician treating patients with Hodgkin and non-Hodgkin lymphoma. He also continues to teach at Harvard Medical School, where he was the first to hold the William Rosenberg Chair in Medicine.

Since joining Dana-Farber, Canellos has developed a special fondness for educating and supporting younger oncologists. Teaching is still the best part of his day.“Seeing all these young people...who grew up in the system and are now well known in the field—that gives you a tremendously good feeling because you feel that effort was worthwhile,” said Canellos. “It truly is a fruition of your effort, and that I enjoy the most.”

What does he consider his best piece of advice?

Do your research and pick a tumor type that hasn’t been studied much and is in need of innovative ideas. “You’ll progress further in your field,” he said, “if you can make a meaningful contribution to disease X,” he said.

For Canellos, teaching his students has always been much more than just teaching the science behind oncology. Oncology is just as much about the personal connection created with a patient as it is about the cancer treatment. Ultimately, said Canellos, his goal is for students to leave him knowing the “art of oncology.”