Craig Sauter, MD, discusses the rationale for investigating maintenance pembrolizumab following autologous stem cell transplant in patients with T-cell NHL and explained some of the potential challenges of investigating this regimen in a larger prospective trial in this patient population. 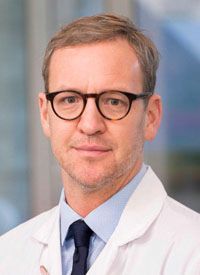 Among 21 evaluable patients, 13 were alive and progression free at 18 months post-ACST (P = .09). Data showed that patients experienced a median PFS of 30.1 months and an estimated 18-month PFS of 83.6%. Additionally, the median overall survival was not reached at 36 months.

“The effort for [pembrolizumab] maintenance therapy warrants prospective evaluation [in patients with T-cell NHL]. For this intervention to proceed, we would need to identify subsets that we believe are particularly sensitive to PD-1 checkpoint inhibition and then generate enough of an effort to answer this in a more definitive fashion with more patients and statistical power,” study co-author Craig Sauter, MD, said in an interview with OncLive®.

Sauter, director of the Blood and Marrow Transplant Program in the Department of Hematology and Medical Oncology at the Cleveland Clinic in Cleveland, Ohio, discussed the rationale for investigating maintenance pembrolizumab following ASCT in patients with T-cell NHL, expanded on the data presented at the 2022 ASH Annual Meeting, and explained some of the potential challenges of investigating this regimen in a larger prospective trial in this patient population.

OncLive®: Could you explain the methodologies of this trial examining pembrolizumab following ASCT in patients with T-cell NHL?

Sauter: This was a prospective, multicenter, phase 2 study in which a third cohort of T-cell NHL and peripheral T-cell lymphoma histologies were investigated as part of the larger phase 2 trial at the multicenter level. These were 21 subjects that underwent high-dose chemotherapy and ASCT stem cell transplant [following a] first chemotherapy-sensitive remission. The intervention was pembrolizumab as maintenance therapy up to 8 cycles.

What prompted you to investigate pembrolizumab following ASCT in this population?

There is evidence for single-agent activity with PD-1 checkpoint inhibition in certain subtypes of peripheral T-cell lymphoma [PTCL]. Additionally, many of us believe that the platform of high-dose chemotherapy followed by ASCT can provide a unique opportunity to administer immunotherapy in a lymphodepleted environment, as well as in the setting of minimal disease bulk following consolidation with high-dose chemotherapy.

What key efficacy data from the cohort of patients with T-cell NHL were presented at the 2022 ASH Annual Meeting?

This was a small cohort of 21 [patients] with varying histologies that all constituted PTCLs. Many of us struggle with this rare subset of NHL and [its] many different subtypes. That said, the primary end point was met within this cohort with 62% of the [patients] being progression free at 18 months.

The key will be to delineate which histologies are particularly sensitive to this intervention, and these results would need to be confirmed in a larger patient number in later-phase studies.

Did you find pembrolizumab to be safe?

The [adverse effects (AEs) that occurred] were somewhat expected, although it should be noted that 17 of the 21 [patients] experienced at least 1 grade 1 AE, mostly around immune-related AEs [irAEs]. Three [patients] had grade 3 severe AEs, typically around irAEs with target organs of the gastrointestinal tract and liver.

What comes next for this modality?

I'm not certain that this will proceed to a later-phase study. These are very rare subtypes of NHL. This would require a large, multicenter, and likely international effort, ideally in a randomized phase 3 fashion with a placebo.

[A potential phase 3 trial would be similar to] studies such as the phase 3 ATHERA trial (NCT01100502) with brentuximab vedotin [Adcetris] as maintenance following high-dose therapy in Hodgkin lymphoma. That will be difficult in [the T-cell NHL] patient population, given the heterogeneity of the subsets of the PTCLs.

What should clinicians be mindful of when thinking about this phase II data?

I would be cautious in tempering the results [from this cohort] because [these were] small patient numbers with less statistical confidence. It is somewhat encouraging that 62% of the patients were progression free at 18 months, but it needs to be taken with a grain of salt in a study that enrolled 21 [patients].

AEs were real. We know with most high-dose chemotherapy, there is a transient toxicity period that typically recovers, [although] subsequent late AEs are always possible, including treatment-related myeloid neoplasia.

Going forward, we would need to rigorously design a larger study to be able to definitively answer the question of checkpoint inhibition following high-dose [chemotherapy] and ASCT.