Julie N. Graff, MD, discusses the results of the KEYNOTE-199 trial, the importance of combination strategies in metastatic castration-resistant prostate cancer, and the next phase of research for the combination. 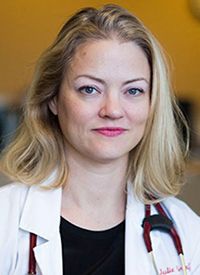 The addition of pembrolizumab (Keytruda) to enzalutamide (Xtandi) showed moderate but durable activity in patients with metastatic castration-resistant prostate cancer (mCRPC) who progressed on enzalutamide, according to findings from cohorts 4 and 5 of the phase II KEYNOTE-199 trial, said lead study author Julie N. Graff, MD.

In the study, patients with chemotherapy-naïve mCRPC who were resistant to enzalutamide were randomized into 1 of 5 cohorts. In cohorts 4 and 5, patients had measurable disease (n = 81), or nonmeasurable/bone-predominant disease (n = 45), respectively. The majority of patients in both cohorts had PD-L1—negative disease.

In cohort 4, the objective response rate (ORR) was 12%, the disease control rate (DCR) was 51%, and the median duration of response was 6.3 months. In cohort 5, the DCR was 51%. The radiographic progression-free survival was 4.2 months and 4.4 months in cohorts 4 and 5, respectively. Overall survival (OS) was not reached in cohort 4 versus 18.8 months in cohort 5.

The combination had a manageable safety profile. The most common all-grade treatment-related adverse events were fatigue (24%), hypothyroidism (16%), and rash (15%), the latter of which was well managed with steroids.

Investigators are currently accruing to the phase III KEYNOTE-641 trial (NCT03834493), in which patients with mCRPC will be randomized to receive pembrolizumab plus enzalutamide versus placebo plus enzalutamide.

In an interview with OncLive, Graff, associate professor of medicine, Oregon Health & Science University Knight Cancer Institute, discussed the results of the trial, the importance of combination strategies in mCRPC, and the next phase of research for the combination.

OncLive: Could you provide background on the KEYNOTE-199 trial?

How are patients with progressive mCRPC traditionally treated?

Currently, the standard of care for patients who progress on enzalutamide varies from place to place. Typically, especially for the men on this trial, we would administer chemotherapy; that might be the next step for many patients. Some providers would consider giving abiraterone acetate (Zytiga) after enzalutamide. Although some responses [can be induced with that approach, we don’t see] as many as when it's given up front.

What did you find in cohorts 4 and 5?

The primary end point of the study was ORR per RECIST v1.1 criteria, which we evaluated in cohort 4. Additional end points included DCR, OS, safety, and prostate-specific antigen (PSA) response. We found that 12% of patients in cohort 4 had a confirmed RECIST response, defined as a greater than 30% reduction in tumor size. Far more patients had any level of tumor reduction. However, some patients did not have confirmatory scans. In cohorts 4 and 5, the DCR was 51%. The PSA response rate was about 14% overall. We did see patients with a PSA of close to 0 on this study. We also saw durable responses.

How was the regimen tolerated?

There are risks with all of these checkpoint inhibitors. Now that these agents are approved for use in so many disease states, we continue to learn more about them. The combination of enzalutamide and pembrolizumab, or any PD-1 inhibitor, appears to lead to more rashes [for patients]; that was something we were very interested in. We saw that 25% of patients had a rash. Of those patients, only 1 was grade 3 and required intravenous steroids. The other patients were managed with topical or oral steroids. Otherwise, the safety profile was sort of as expected.

The next step in this research is to see whether the combination extends survival over the currently available treatment options. Merck has started the KEYNOTE-641 trial, which is trying to answer this question. In that study, which is being done worldwide, patients who have not received enzalutamide or any drug like it will receive enzalutamide [and either pembrolizumab or placebo].

Should immunotherapy only be evaluated in combination in this space?

In general, single-agent checkpoint inhibitors have not been very exciting. We've seen higher responses when they're combined with other drugs. There have been studies with the combination of pembrolizumab plus olaparib (Lynparza), which is a PARP inhibitor, and with chemotherapy, [and it is] kind of surprising that it would work. Combinations are the future. Efforts are underway to combine different types of immunotherapies. For example, studies are evaluating PD-1 inhibitors, such as pembrolizumab, with CLTA-4 inhibitors, such as ipilimumab, (Yervoy).

What other research from the 2020 Genitourinary Cancers Symposium would you like to spotlight?

I'm very excited about an investigator-initiated trial that I'm doing within the Veterans Health Administration system. I'm looking at men whose cancers are progressing on enzalutamide, giving them pembrolizumab, and then sorting them into responders and non-responders. The responders are donating stool to the non-responders, and then those non-responders will be retreated. The theory is that the microbiome of the gut is essential in response to checkpoint inhibitors. Several lines of [research] support this, and we're looking forward to [learning more about] it.