Gareth J. Morgan, MD, PhD,&nbsp;discusses ongoing research of BCMA-targeted therapies, as well as the use of venetoclax in the myeloma treatment paradigm. 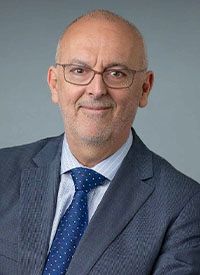 &ldquo;The future for patients is really excellent,&rdquo; said Morgan. &ldquo;The introduction of therapies that target BCMA or target T cells to BCMA is going to change the whole arena as they come close to the upfront setting, and more and more people will benefit long term.&rdquo;

For example, the BCMA-directed ADC belantamab mafodotin was granted a priority review designation by the FDA as a treatment for patients with relapsed/refractory myeloma who received prior therapy with an immunomodulatory drug, a proteasome inhibitor, and an anti-CD38 antibody. In the pivotal DREAMM-2 trial, the agent, when given at the recommended 2.5-mg/kg dose, elicited an overall response rate (ORR) of 31% (97.5% CI, 20.8-42.6). The ORR was 34% (97.5% CI, 23.9-46.0) in those who received belantamab mafodotin at 3.4 mg/kg.

In addition to BCMA-targeted therapy, venetoclax (Venclexta) has proven to be beneficial for patients with multiple myeloma who have t(11;14). In June 2019, theFDA lifted a partial clinical hold on venetoclaxin multiple myeloma, specifying the phase III CANOVA trial (M13-494; NCT03539744), which is examining venetoclax in combination with pomalidomide (Pomalyst) and dexamethasone in patients with relapsed/refractory myeloma that harbors t(11;14), could continue.

&ldquo;We are making a huge difference to outcomes in multiple myeloma. There is a proportion of patients that have very long-term remissions, and they are effectively cured,&rdquo; said Morgan. &ldquo;Now, we are trying to increase that percentage to get more people to spend more time with their family and have a greater QoL.&rdquo;

In an interview during the 2020OncLive&reg;State of the Science Summit&trade; on Hematologic Malignancies, Morgan, a professor in the Department of Medicine and director of Multiple Myeloma Research, NYU Langone Health&rsquo;s Perlmutter Cancer Center, discussed ongoing research of BCMA-targeted therapies, as well as the use of venetoclax in the myeloma treatment paradigm.

OncLive: What are the emerging novel approaches in multiple myeloma?

Morgan: In the last 20 years, we have seen [treatment for multiple myeloma] evolve from having 1 treatment to now a new therapeutic modality almost every 5 years. Until now, myeloma has been a disease that is treated, goes into remission, stays in remission, relapses, goes back into remission, and relapses again. That was about it. With the choices we have today, and the development of agents that target BCMA, we are able to get everybody into remission. We should aim to maximize the number of patients in remission, and have them be in long-term remission.

Myeloma is not a single disease. There are probably 6 different disease subtypes, all of which should be treated differently. This is going to be driven in the clinic by the introduction of venetoclax, which is largely active in the t(11;14) subset of myeloma, which makes up about 15% to 20% of the overall [population]. The responses in that subset are dramatic and remarkable, and therefore will change things around.

Another novel approach is agents that target BCMA on the surface of plasma samples, which can be considered as 3 different types. One is ADCs, in which you put a warhead on an antibody that targets BCMA. The classic example of that is belantamab mafodotin, which looks like a really good drug with excellent responses.

Then, there are CAR T cells, where the patient's own T cells are modified, given back to the patient, and they result in excellent responses. The third and final approach is bispecific antibodies, in which you have an antibody that recognizes the myeloma cell and T cells, bringing them closer together.

All of these agents are super effective. Even in heavily resistant disease, you can get patients into responses that last for as long as 1 year. If you move all of [these agents up front], they're going to give much better responses. At this time, it's hard to distinguish between them because the disease group is so diverse; cross comparing between trials shouldn't be done. We should be excited about the efficacy [these novel agents] are going to have.

How are ADCs used in multiple myeloma?

ADCs target something that is toxic to the cancer cellacting as the ideal silver bullet. The one that's closest to market is belantamab mafodotin, where monomethyl auristatin F (MMAF) is linked to a BCMA antibody. This takes MMAF to the target cell, kills it by inhibiting its spindle, and looks to be really effective.

There were 2 studies [with this agent]: DREAMM-1 and DREAMM-2. The activity looked somewhat greater in the DREAMM-1 study. The results in the DREAMM-2 study are more realistic, but it looks very exciting, with more than 30% of patients getting good responses that are durable. The downside is that we need to manage the ocular toxicity keratopathy, but that's being dealt with by adjusting the dose, and it's not becoming a problem in the clinic.

What is the research surrounding CAR T-cell therapy in multiple myeloma?

bb2121 is a CAR T-cell product that's being produced by Bristol-Myers Squibb [and bluebird bio]. The KarMMa study identified the optimum dose of bb2121, which is 150 to 450 x 106. At [the highest] dose, people go into remission and [stay there] for approximately 11.3 months. It seems to be relatively safe, with only 3% of patients experiencing cytokine release syndrome. The product bb2121 is a significant advance because it is nontoxic and effective.

The other major CAR T-cell therapy, JNJ-4528, was recently studied in the CARTITUDE-1 study, which is the Janssen equivalent [of bb2121]. The data that were presented at the 2019 ASH Annual Meeting look somewhat similar to the data with bb2121, with remissions lasting for 1 year and perhaps slightly longer; however, cross-comparing between studies at this time is fraught with problems.

How is venetoclax being used in multiple myeloma?

Venetoclax is an anti-apoptotic drug, which targets BCL-2. Most myelomas aren't dependent upon BCL-2, but they are dependent on MCL1. In most cases, [venetoclax] does not work as effectively as it does in the t(11;14) subgroup, which comprises about 20% of patients with myeloma. The responses are outstanding, and when used in combination with other agents, the responses are even greater. There is a future for venetoclax as a therapy for the t(11;14) subset, and this will drive more molecular segmentation of myeloma in future.

How do you determine patient eligibility for each treatment?