The tumor suppressor gene PTEN has been linked to the removal of DNA damage from UVB radiation, a major risk factor in the development of skin cancer. 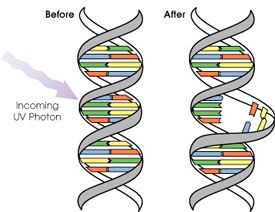 The tumor suppressor gene PTEN has been linked to the removal of DNA damage from UVB radiation, a major risk factor in the development of skin cancer. The discovery may help researchers to determine the genetic targets of UVB rays, something that has been historically poorly understood.

By using low suberythermal UVB radiation on 15 genetically altered mice with lower levels of PTEN in their epidermis, researchers were able to show that the mice were predisposed to developing skin cancer. They were compared to mice with normal PTEN levels. The researchers said this supported their conclusion that a 50% reduction in a person’s PTEN level increases their susceptibility to skin tumorigenesis following exposure to UVB radiation.

The study also looked at 69 samples of human skin cells exposed to UVB radiation and subsequently examined the rates of DNA repair. Test samples with lower PTEN levels had slower rates of DNA repair. Research linked the slow rates of DNA repair to a lacking of xeroderma pigmentosum C (XPC), a key DNA repair protein. In this case, XPC was not signaled by PTEN through the AKT/p38 pathway. DNA repair levels increased when XPC was introduced into PTEN-suppressed cells.

The study is scheduled to be published in the August 1, 2011, edition of the journal Cancer Research.

“This was an unexpected finding and definitely provides a new approach for chemoprevention strategies,” said Yu-Ying He, PhD, an associate professor of medicine at the University of Chicago, in a press release. “It’s possible that if we can increase PTEN activity through nutritional supplements or some sort of pharmaceutical intervention, we may be able to prevent this common cancer.”

The authors of the study wrote that PTEN’s role in checkpoint pathways may depend on the type of DNA damage, the efficiency of the repairs on damaged DNA, the waveband-specific signaling pathways between UVB and UVC, or the cell-type-specific response to PTEN inhibition, and that more research must be done to understanding the connection between PTEN and skin cancer at a molecular level.