H3B-8800, a splicing molecule that binds to Splicing Factor 3b Subunit 1, has been shown to delay leukemic infiltration in a model of chronic lymphocytic leukemia using NOD-SCID interleukin-2 receptor gamma mice. 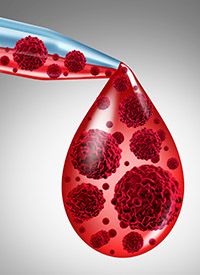 H3B-8800, a splicing molecule that binds to Splicing Factor 3b Subunit 1(SF3B1), has been shown to delay leukemic infiltration in a model of chronic lymphocytic leukemia (CLL) using NOD-SCID interleukin-2 receptor gamma (IL2Rγ)null (NSG) mice, according to findings presented at the 2021 International Workshop on CLL.1

“SF3B1 mutation is the second most common mutation in CLL, and in most of the cases it’s subclonal; it’s not present in all of the tumoral cells,” she said. The mutation is related to worse prognosis, as patients who harbor the SFB31 mutation have shorter overall survival than those who do not, and the duration of response to current treatments, such as ibrutinib (Imbruvica) and venetoclax (Venclexta) is shorter in patients with CLL patients who harbor the mutation.

To understand the role of SF3B1, López-Oreja’s team analyzed 47 CLL primary samples from patients, and RNA sequencing from 249 patients with CLL from the International Center Genome Consortium project. A CRISPR Cas 9-edited SF3B1-mutated MEC1 CLL cell line was derived from a 61-year-old Caucasian man with CLL with prolymphocytoid transformation. One control and 3 SF3B1-mutant cell lines were obtained.

In pancreatic cell lines, SF3B1-mutant cells have previously been shown to be more sensitive to HSB-8800 than SF3B1 wild-type cell lines.

“In our hands, we see pretty much the same,” with sensitivity to HSB-8800 being higher in the SFB31 K700E–mutant cell lines compared with wild-type. This effect is greater in clonal vs subclonal cells, she said.

Luciferase cell lines were then introduced in NSG mice, and after 10 days, the mice were treated orally with 6 mg/kg daily of H3B-8800. After 10 more days, peripheral blood, bone marrow, spleen, and liver were analyzed for leukemic infiltration. Bone marrow infiltration analyzed by flow cytometry using CD19 was weaker in treated mice with the SF3B1 mutation compared with wild-type mice.

The effect of SF3B1 on alternative splicing was also investigated, “and we have seen that alternative 3’ splice sites are the events that changed the most in the presence of the mutation. These [altered events] happen in patients and in cell lines, and the overlap between the events is quite high,” she said.

Next, the downstream effects of an aberrant MAP3K7 isoform was investigated, and the researchers confirmed that impaired MAP3K7 production leads to p38 phosphorylation and NF-KB pathway hyperactivation, accelerating cell migration and tumor development, as described previously in other malignancies. MAP3K7 aberrant splicing also leads to lower phosphorylation levels by p38, accelerating erythroid differentiation and apoptosis, as shown in myelodysplastic syndrome.