Daniel J. Landsburg, MD, discusses the management of patients with double-hit lymphoma who have achieved remission. 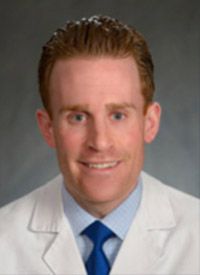 For patients with double-hit lymphoma (DHL) who go into remission, there is no uniform procedure to prolong benefit. Autologous stem-cell transplant is performed on some patients to reduce the risk of relapse, but the impact has yet to be proven.

Results showed that at 3 years, the relapse-free survival (RFS) rate was 80% and overall survival (OS) rate was 87% for all patients. RFS and OS showed no significant difference in patients who received autologous stem-cell transplant and those who did not.

The study’s lead author, Daniel J. Landsburg, MD, said the study also showed that patients treated with R-CHOP experienced inferior 3-year RFS compared to those treated with an intensive frontline regimen (56% v 88%; P = .002). However, when examined by receipt of stem-cell transplant, the 3-year RFS and OS rates were not significantly different between the R-CHOP and intensive therapy groups.

OncLive: Please provide an overview of this study.

In an interview with OncLive, Landsburg, assistant professor, University of Pennsylvania School of Medicine, discussed the management of patients with DHL who have achieved remission.Landsburg: DHL is a very aggressive variant of non-Hodgkin lymphoma for which the outcomes of patients treated for this disease may be poor. Even with patients who go into remission, there are some who think doing an autologous stem cell transplant after patients achieved remission would be a strategy to reduce the risk of relapse. And in this disease, for the most part, relapses are fatal—it is particularly hard to control this disease once patients have relapsed. So, the thought was, even in remission, maybe they would benefit from a stem cell transplant, which would treat occult disease and put these patients into a longer-lasting remission. This was a clinical dilemma in patients that I have seen with this disease who had achieved a remission.

What were the significant results?

The background for the study is essentially, some of us would recommend doing a stem cell transplant in remission for these patients and some would not—so nobody really knew if there was a right answer. So, together, as a group of investigators, we tried to look at our outcomes of patients who had achieved a remission with DHL and then looked at their long-term outcomes based on whether they had received a stem cell transplant in first remission. Essentially, we had 159 patients and about 40% had a transplant in first remission and 60% did not. When you look at their survival long-term, about 3 years later, overall survival and progression-free survival outcomes were not significantly different in the group that underwent the stem cell transplant versus those that did not. So, it was a negative study.

We then looked back at the characteristics of the patients in these cohorts. Maybe the patients that did not get the transplant were higher risk or sicker and that is why they did not get the transplant or there are perhaps some differences in these groups at baseline that would explain the outcomes, but they were very similar populations. So, that did not explain the similarities in outcome.

What are the next steps for this patient population?

The second thing is, we did not really look at the patients that relapsed after their frontline therapy—meaning, we did not look at what happened specifically to them. Those are higher risk patients who probably need more than just an intensive regimen, they need newer agents added to their intensive therapy or some alternative treatment strategy in the frontline. But, what we primarily looked at were the patients who went into remission and most of them did well in the long run.

What would you like community oncologists to take away from these findings?

So, the key is looking into patients who do not respond to initial therapy and how you can make their first-line treatment more effective. The second thing going forward is to look at the patients who relapse, as we did look at what they were treated with or what their outcomes were after specific treatments, but to look at better strategies to get these patients into a long-term remission, if that is possible. Which, at this moment, is very difficult.I think referral to an academic medical center may be important, just for the proper diagnosis and management for these patients. But, in general, using more intensive regimen and referral to a center is probably better for these patients, long term.

Another important thing, which was not highlighted in the study, is testing for these mutations that define the DHL patients doing FISH testing. Frequently, I see patients who are diagnosed in the community that maybe were not tested in the beginning, but were tested at relapse, or were tested in the beginning but the positive results indicating they are DHL patients did not really prompt any different therapy. These patients were still potentially treated with R-CHOP, which we do not think is the adequate therapy for them.

What is status of genetic testing in this population?

Is there anything else that you would like to add?

So, from the community perspective, focusing on appropriate testing and understanding of the testing and then possibly using a more intensive regimen if they are able to or if they are uncomfortable managing these patients, referring them to an academic medical center. I think these are the keys for this population in general.Recently, I’ve noticed that a lot of community pathologists will send out the samples that they receive for testing at reference labs. And the reference labs now have gotten better at doing these FISH panels for mutations in these high-risk lymphoma patients. The prevalence of testing has gone up in these particular cases, but interpretation of these results may require a specialist in that particular field. I think, like anything else, you could do a lot of testing and you could have a lot of results that don’t affect clinical practice or are difficult to interpret. In general, well-directed testing is [ideal]. Broad testing may be useful for research purposes, but might not affect clinical practice at this moment.In an ideal world, we would have a randomized control trial where patients achieve a remission and then are randomized to transplant versus no transplant. I am also not sure if patients would be interested in a study where a computer decided if they got a transplant or not. It is important to these large retrospective studies to answer questions that a clinical trial would never be able to answer, because a trial cannot be coordinated for logistical reasons.