Funda Meric-Bernstam, MD, discusses the potential for the combination of telaglenastat (CB-839) and cabozantinib (Cabometyx) in the treatment of metastatic renal cell carcinoma. 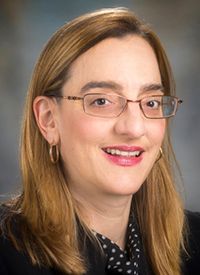 Glutaminase is a key enzyme that controls glutamine utilization, a metabolic pathway that is prominent in RCC and important for the tumor to thrive in the body. Telaglenastat is a first-in-clinic, small molecule, reversible, oral glutaminase inhibitor that was found to synergize with cabozantinib, a VEGFR2/MET/AXL inhibitor, in preclinical RCC models, he added.

In a phase I study presented at the 2019 Genitourinary Cancers Symposium, the glutaminase inhibitor telaglenastat was combined with the multikinase inhibitor cabozantinib in 13 patients with mRCC. Among 12 evaluable patients, results showed that the objective response rate (ORR) was 42%. In 10 patients with clear cell mRCC, the ORR was 50%; 5 patients had a partial response and 5 patients demonstrated stable disease with the treatment.

Five patients received >12 months of therapy, and 3 patients remained on therapy at the data cutoff in September 2018. No maximum-tolerated dose was reached, but the recommended phase II dose of each agent is telaglenastat at 800 mg twice daily plus 60 mg of cabozantinib once daily. The most common treatment-related adverse events (AEs) were diarrhea (62%), decreased appetite (46%), and fatigue (39%). Grade 3 AEs included diarrhea, hypertension, and platelet count decrease (n = 1 each).

A randomized phase II trial will compare telaglenastat plus cabozantinib versus cabozantinib plus placebo, said Meric-Bernstam, lead author of the study.

In an interview with OncLive, Meric-Bernstam, chair of the Department of Investigational Cancer Therapeutics, medical director of the Institute for Personalized Cancer Therapy, and a professor in the Divisions of Cancer Medicine and Surgery at The University of Texas MD Anderson Cancer Center, discussed the potential for the combination in mRCC.

OncLive: What was the rationale to combine telaglenastat and cabozantinib?

Meric-Bernstam: As you know, cancer metabolism is an interesting target nowadays that is increasingly being exploited. Glucose and glutamine are nutrients. Glutaminase modulates glutamine conversion into glutamate, enhancing its utilization. Glutaminase is expressed at high levels in RCC. In vitro, RCC cells are sensitive to telaglenastat, the glutaminase inhibitor. Telaglenastat and cabozantinib also appeared to be synergistic [in preclinical studies]. In vivo, antitumor activity is enhanced with this combination therapy, leading to the rationale for this clinical trial.

What was the design of the study?

This is a phase I combination with cabozantinib given at 60 mg per day and telaglenastat administered at 600 mg or 800 mg twice daily. We enrolled 13 patients; 11 of the patients had clear cell RCC and the other 2 had papillary disease. This trial was done in a population of patients who had received a median 3 lines of prior therapy. One-third of patients had 2 lines of prior VEGF-targeted therapy.

Overall, we saw that this was a tolerable combination therapy. The recommended phase II dose of telaglenastat in this combination was 800 mg twice daily, which is the same as the recommended dose for the monotherapy. The AE profile was very similar to what we see with cabozantinib alone, and we saw that preliminary efficacy was promising. In the 13 patients enrolled, 12 were evaluable for response. Of those patients, 2 had papillary carcinoma. In the overall population, the ORR was 42%. In the 10 patients with clear cell RCC, the ORR was 50%.

Looking at the trends of the response was also interesting. We had some deep responses in patients who were heavily pretreated with multiple lines of therapy. Also looking at the duration of response, we had 5 patients who received 14 months of treatment or more. At the time of data cut-off, 3 patients were still on treatment. Also notable was that some patients had early responses, and interestingly, some patients had delayed responses. This underscores the need for further follow-up.

Based on these data, a phase II study has been initiated and is accruing. This is obviously a very interesting time in RCC treatment algorithms, so I'm hoping with time we will be able to identify the best combination therapy and the best sequence. But there's no doubt that this combination is promising. The randomized trial has registrational intent.