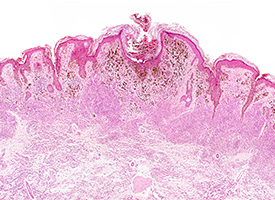 The neutrophil-to-lymphocyte ratio (NLR) is an independent factor for overall survival (OS) in patients with metastatic melanoma, whether they receive targeted therapy or immunotherapy. In a retrospective analysis performed in patients treated at a single institution, OS was markedly improved in patients with an NLR <5 at a median of 14.8 months compared with those who had an NLR >5, in whom the median OS was 5 months, according to research presented by Elizabeth Blackley, MD, at the 2017 ESMO Congress.