Dr. Ferraro on the Use of Molecular Profiling in Pancreatic Cancer

Dr. Hussein on the Evolution of Treatment in HCC
Conference Coverage > 2018 World Congress on GI Cancer > 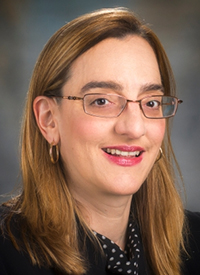 Funda Meric-Bernstam, MD
TAS-120 demonstrated a clinically meaningful benefit with a manageable toxicity profile in patients with cholangiocarcinoma harboring FGFR2 gene fusions, including patients who had progressed on an FGFR inhibitor, according to phase I results presented at the 2018 World Congress on GI Cancer.

In 17 cholangiocarcinoma patients with non-FGFR2 fusions, 14 were evaluable for efficacy. Three of these patients had a cPR and 10 had stable disease. Eleven patients had tumor shrinkage.

“TAS-120 demonstrated meaningful clinical benefit in cholangiocarcinoma patients with FGFR2 gene fusions, this includes patients who progressed on prior FGFR inhibitors,” said lead author Funda Meric-Bernstam, MD, chair of the Department of Investigational Cancer Therapeutics, medical director of the Institute for Personalized Cancer Therapy, and a professor in the Divisions of Cancer Medicine and Surgery at The University of Texas MD Anderson Cancer Center.

“Fifteen of the 20 patients are still currently on treatment, suggesting that we have not yet met the final median duration of treatment,” added Meric-Bernstam

The most frequent all-grade adverse events (AEs) were expected and manageable, reported Meric-Bernstam, including hyperphosphatemia (78%), and cutaneous and gastrointestinal toxicity. Treatment-related grade 3 AEs occurred in 51.1% of patients, with the most common including hyperphosphatemia (22.2%), ALT increase (6.7%), palmar-plantar erythrodysesthesia syndrome (4.4%), constipation (2.2%), AST increase (2.2%), and diarrhea (2.2%). There were no grade ≥4 AEs observed in this study.

“These results are encouraging for this rare and difficult-to-treat cancer,” Milind Javle, MD, professor of Gastrointestinal Medical Oncology at The University of Texas MD Anderson Cancer Center, and an investigator on the phase I TAS-120 study, said in a press release. “Given the limited number of patients diagnosed each year with cholangiocarcinoma in the United States, we recognize the sense of urgency for and importance of ongoing research to advance potential new therapies.”

TAS-120 was granted orphan drug status by the FDA in May 2018 for the treatment of patients with cholangiocarcinoma, according to Taiho Oncology, the manufacturer of the TKI.

The phase I dose-expansion study is currently recruiting in multiple cohorts, including patients with cholangiocarcinoma with other FGF/FGFR aberrations and gliomas. There is also a basket of other advanced solid tumors with FGFR amplifications, fusions, and mutations.