Challenges in the Treatment of Follicular Lymphoma 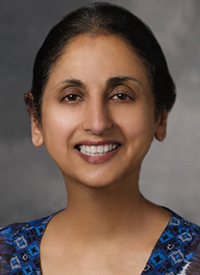 Ranjana H. Advani, MD
Half of a small group of patients with relapsed or refractory non-Hodgkin’s lymphoma (NHL) had major responses to treatment with an anti-CD47 antibody plus rituximab (Rituxan), according to a report at the 2018 ASCO Annual Meeting in Chicago, Illinois.

Eight of 22 patients had complete responses and 3 others had partial responses. Three other patients had stable disease, resulting in a disease control rate of 64%.

The most common treatment-related adverse events (TRAEs) were infusion-related reaction, anemia, headache, chills, and pyrexia. Most TRAEs were grade 1/2, including on-target anemia that can be mitigated by administration of a priming dose and maintenance dosing.

“Hu5F9-G4 (5F9) is a first-in-class antibody targeting the macrophage checkpoint CD47 and is a promising novel immunotherapy in non-Hodgkin’s lymphoma,” said Ranjana H. Advani, MD, leader of the lymphoma clinical care program at Stanford Health Care in Palo Alto, California. “5F9 is well tolerated in combination with rituximab with no maximum tolerated dose achieved. On-target anemia is transient and significantly mitigated by priming and maintenance dosing.”

The investigators also observed encouraging antitumor activity in both follicular lymphoma and diffuse large B-cell lymphoma (DLBCL). Median duration of response was not reached with more than 6 months of follow-up.

Advani reported findings from the first study to investigate the clinical activity of 5F9 in combination with rituximab. Investigators enrolled patients with relapsed/refractory NHL into a dose-escalation phase that evaluated 5F9 doses of 10 to 30 mg/kg, following a 1 mg/kg priming dose, plus standard-dose rituximab. As the MTD was not reached, investigators decided on a recommended phase II dose of 5F9 is a 1-mg/kg priming dose, followed by 30 mg/kg weekly for the first cycle and every 2 weeks thereafter.

5F9 was generally well tolerated, Advani reported. Three separate dose-limiting toxic events occurred across the 3 dose levels evaluated: 1 case each of neutropenia, pulmonary embolism, and immune thrombocytopenic purpura (ITP). The patient with ITP discontinued treatment, but the other 2 patients were subsequently rechallenged with 5F9 and continued treatment without recurrence of the adverse events (AEs). No patient developed an autoimmune AE. No late safety signals have risen during treatment durations beyond 18 months.

“RBCs have a spectrum of the ‘don’t eat me’ and ‘eat me’ signals,” she said. “As RBCs age, they lose CD47 and gain ‘eat me’ signals, serving as a natural mechanism of RBC recycling. Younger RBCs are not susceptible to CD47 blockade, as they do not have the ‘eat me’ signals. The initial priming dose of 5F9 results in a temporary and mild decline in hemoglobin through clearance of aged RBCs and a temporary reticulocytosis that resolves. Hemoglobin levels return to baseline even with continued treatment with 5F9 at significantly higher doses.”

Objective responses were observed in 6 of the 15 patients with DLBCL and 5 of the 7 with FL. Five patients in the DLBCL subgroup had complete responses, as did three in the follicular lymphoma subgroup. 5F9 demonstrated efficacy in patients with rituximab-refractory disease.

Responses generally occurred within the first 2 months, and at a median follow-up exceeding 6 months, 1 of the 11 responding patients had progressed. Two patients with DLBCL had a deepening of response over time, transitioning from stable disease and partial response to complete responses. Median duration of response had yet to be reached, and the longest complete response had persisted beyond 14 months.
Advani RH, Flinn I, Popplewell L, et al. Activity and tolerabilty of the first-in-class anti-CD47 antibody Hu5F9-G4 with rituximab tolerated in relapsed/refractory non-Hodgkin lymphoma: initial phase 1b/2 results. J Clin Oncol. 2018;36(suppl; abstr 7504). meetinglibrary.asco.org/record/159490/abstract.