Safety and Efficacy of CAR T Therapy in R/R DLBCL

Use of CAR T Therapy in R/R DLBCL 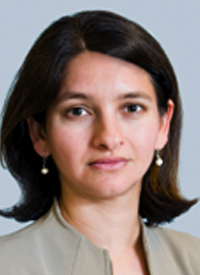 Noopur Raje, MD
The anti-BCMA CAR T-cell therapy bb2121 had a median progression-free survival (PFS) of 11.8 months and a median duration of response of 10.8 months for patients with relapsed/refractory heavily pretreated multiple myeloma, according to updated findings from the multicenter phase I CRB-401 study presented at the 2018 ASCO Annual Meeting.

The median age of patients in the escalation stage was 58 years (range, 37-74), and 38% had high-risk cytogenetics. In the expansion group, the median age was 65 years and high-risk cytogenetics were present for 41% of patients. Patients had received 7 and 8 prior therapies, in the escalation and expansion groups, respectively. Twenty-nine percent and 32% of those in the escalation and expansion groups, respectively, were penta-refractory.
All 16 evaluable responding patients were negative for minimal residual disease (MRD). In this group, the median PFS was 17.7 months. "MRD-negativity in the bone marrow was seen very early on, as early on as a month," noted Raje. In 2 patients without a response, both tested MRD-positive. In the nonresponding group, the median PFS was 2.7 months.

"A dose response relationship was observed across all active doses, and we did see higher CAR T cell expansion in patients who were responders versus nonresponders," Raje said.

The most common grade ≥3 treatment-emergent adverse events (TEAE) of interest for bb2121 were neutropenia (79%), thrombocytopenia (51%), anemia (44%), cytokine release syndrome (CRS; 5%), and neurotoxicity (2%). Low-grade CRS occurred in 63% of patients and low-grade neurotoxicity was apparent in 33% of bb2121-treated patients.

Most TEAEs were treatable and resolved rapidly. By day 32, absolute neutrophil counts increased to ≥1000/μL for 78% of patients. Platelet counts recovered to ≥50,000/μL for 55% of patients by day 32. There were no grade 4 CRS events and no fatal CRS or neurotoxicity events. Tocilizumab was required for 21% of patients had corticosteroids were administered for 9% of patients.

"Interestingly enough, we found that this product is extremely well tolerated," said Raje. "We did see CRS in almost 60% of patients, but most of it was managed and it was grade 1 and 2 with very little grade 3 CRS, and we just had 1 patient with grade 4 neurotoxicity who is now completely recovered."

Based on an earlier assessment of the dose escalation trial, bb2121 was granted a breakthrough therapy designation in November 2017. A global phase II trial, known as KarMMa, is currently open for enrollment, and will serve as the basis for a regulatory submission for bb2121. The trial plans to enroll 94 patients with relapsed/refractory multiple myeloma (NCT03361748).

"Additional trials are planned for multiple myeloma [in earlier settings]. We have now shown the proof-of-concept in these very end-stage myeloma patients," said Raje. "We are doing ongoing studies looking at predictors of response, to see if there are biomarkers to predict toxicity and to see who the patients are who progress and what the mechanisms of those progressions are."
Raje NS, Berdeja JG, Lin Y, et al. bb2121 anti-BCMA CAR T-cell therapy in patients with relapsed/refractory multiple myeloma: Updated results from a multicenter phase I study. J Clin Oncol. 2018;36 (suppl; abstr 8007).