Dr. McGregor on the Combination of Atezolizumab and Bevacizumab in RCC

Dr. Sznol on Patient Selection for Combination Therapy in mRCC

Sunitinib Noninferior to Surgery for OS in Metastatic Kidney Cancer 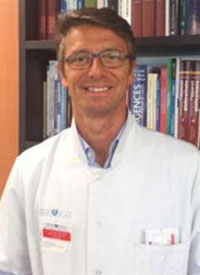 “Sunitinib alone is not inferior to nephrectomy followed by sunitinib,” said lead study author Arnaud Méjean, MD, a urologist at Hôpital Européen Georges-Pompidou—Paris Descartes University. “When medical treatment is required, cytoreductive nephrectomy should no longer be considered the standard of care for these patients with synchronous metastatic disease.”

Méjean added that the receptor tyrosine kinase inhibitor appears to extend survival, but the trial was only powered to detect noninferiority, not superiority.

At a median follow-up of 50.9 months, investigators found that the overall response rate was 35.9% in both groups, and the rate of tumor shrinkage was similar between the treatment groups (27.4% vs 29.1%). The clinical benefit rate in the sunitinib group was 47.9% compared with 36.6% in the surgery group.

The FDA approved sunitinib for the adjuvant treatment of adults at high risk for recurrent RCC following nephrectomy in November 2017 based on results from the multicenter, international, double-blind, placebo-controlled, S-TRAC trial.2,3

ASCO expert Sumanta Kumar Pal, MD, associate clinical professor, Department of Medical Oncology and Therapeutics Research at City of Hope Comprehensive Cancer Center in Duarte, California, said that findings from retrospective studies appear to show a benefit associated with nephrectomy, but the prospective, randomized results from CARMENA show that this may not be the case.

“In the context of the targeted therapy sunitinib, there doesn’t necessarily seem to be a need to remove the kidney in patients with advanced and metastatic disease,” Pal said. “[Dr Méjean has] really sort of flipped the existing paradigm that we have in the management of advanced kidney cancer in this regard.”

Pal noted that the recent approvals of cabozantinib (Cabometyx) for treatment-naïve patients and the combination of nivolumab (Opdivo) and ipilimumab (Yervoy) as a frontline treatment for patients with intermediate- and poor-risk disease may eventually make sunitinib obsolete.

In the phase III CheckMate-214 trial, the combination reduced the risk for death by 32% compared with sunitinib. The risk reduction was 37% in patients with intermediate- and poor-risk RCC, who constituted about 75% of the intent-to-treat population.5

“In the context of these newer therapies, we may potentially have to go back to the drawing board once again and assess the relevance of removing the primary tumor,” Pal concluded.