Dr. Madduri on the Results of the CARTITUDE-1 Trial in Multiple Myeloma 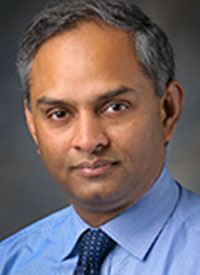 At a median follow-up of 39.1 months, the 3-year OS rate was 47% with axi-cel, with approximately 60% of patients having relapsed or progressed. At a previous 2-year analysis of the study, the objective response rate was 83% and the complete remission rate was 58%. The 2-year OS rate was 51% and the 2-year progression-free survival rate was 39%.

"At the updated analysis, the median overall survival was reached," Sattva S. Neelapu, MD, Department of Lymphoma and Myeloma, The University of Texas MD Anderson Cancer Center, said during a presentation of the findings. "These data are highly encouraging."

As data for axi-cel continue to mature, focus is being placed on the mechanisms behind treatment failure, particularly related to the loss of CD19 and the expression of additional antigens. Pretreatment IHC results were available for 82 patients in cohort 1 and 2. Additionally, post relapse IHC findings were available for 18 patients who responded to axi-cel. At baseline, 90% of samples were CD19-positive and 96% were CD20-positive.

"Loss of CD19 expression by IHC was common at relapse post-axi-cel," said Neelapu. "CD20 expression by IHC, corroborated by confocal microscopy showing membrane localization, was robust in most biopsy samples despite prior rituximab-based treatment."

Looking deeper at CD19, however, IHC may not provide a complete picture, he noted. A number of alternative splicing events were found on the CD19 gene, which could impact the CAR binding epitope, Neelapu said. In these scenarios, IHC still tested positive for the CD19 protein but the therapeutic effective may have been loss. When looking at the samples from ZUMA-1, there was a significant difference in splicing events between baseline and relapse (P <.05).

"Antigen escape post–axi-cel may be mediated by selection of tumor cells with lower CD19 expression, or of tumor cells expressing alternative CD19 splicing variants," said Neelapu. "Altogether, these data suggest that efficacy of anti-CD19 CAR T-cell products may be improved by co-targeting or sequential targeting of alternate B cell antigens."

Additional studies continue to assess axi-cel alone or in combination with other agents, in an attempt to improve upon the outcomes data. The ZUMA-11 trial is currently enrolling participants to explore axi-cel with utomilumab, a 4-1BB inhibitor (NCT03704298). Additionally, the ZUMA-14 study is looking at axi-cel plus rituximab or lenalidomide (NCT04002401).
Neelapu SS, Rossi JM, Jacobson CA, et al. CD19-loss with preservation of other B cell lineage features in patients with large B cell lymphoma who relapsed post–axi-cel. Presented at: 2019 ASH Annual Meeting; December 7-10, 2019; Orlando, FL. Abstract 203. bit.ly/2OXlwGr.