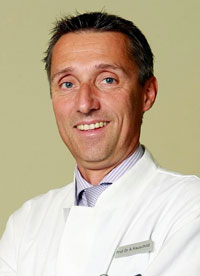 Axel Hauschild, MD
Adjuvant treatment with dabrafenib and trametinib reduced the risk of relapse or death by 53% compared with placebo for patients with BRAF-mutant stage III melanoma, according to findings from the phase III COMBI-AD study presented at the 2017 ESMO Congress and simultaneously published in the New England Journal of Medicine.1,2

After a median follow-up of 2.8 years, the 3-year relapse-free survival (RFS) rate with dabrafenib and trametinib was 58% compared with 39% for placebo (HR, 0.47; 95% CI, 0.39-0.58; P <.001). “This is a very remarkable hazard ratio and if you look at the P value for the primary endpoint of RFS there are 13 zeroes, and therefore it is very impressive,” said lead investigator Axel Hauschild, MD, Professor of Dermatology, University of Kiel, Kiel, Germany.

Early data for overall survival (OS) showed that 86% of patients in the combination arm were alive at 3 years versus 77% with placebo (HR, 0.57; 95% CI, 0.42-0.79; P = .0006). At the interim analysis, the OS advantage was not yet deemed statistically significant, according to predefined criteria that required a P value of .000019. “For overall survival, there was a 43% reduction in the risk of dying from metastatic melanoma. A very impressive result that is maintained over time,” said Hauschild.

The study randomized 870 patients with BRAF V600E/K stage III melanoma to receive dabrafenib plus trametinib (n = 438) or placebo (n = 432). All patients were within 12 weeks of complete surgical resection and had stage IIIa (18%), IIIb (41%), and IIIc (40%) disease. Dabrafenib was given at 150 mg twice daily with trametinib at 2 mg once daily for 12 months. The salvage therapies received following the study were similar in each arm, and, in some cases, included a rechallenge with BRAF/MEK inhibition, Hauschild noted.

"Both the placebo and the combination group received the same amounts of salvage therapy. Seventy-four percent of the patients received systemic treatment for progressive disease," he said. "It is unlikely that overall survival was impacted by the salvage therapies, since it was so balanced between the two groups."

The baseline characteristics were similar between groups. In the combination arm, the median age of patients was 50 years and 91% of tumors had the BRAF V600E mutation with the remainder having the V600K alteration. Most patients (92%) had an ECOG performance status of 0. Twelve percent of patients in the combination group had in-transit metastases versus 8% with the placebo. Seventeen percent of patients had ≥4 positive lymph nodes, with the remainder having <4.
The median RFS was not reached with the combination versus 16.6 months for placebo. RFS was improved with dabrafenib/trametinib across all subgroups, Hauschild noted. "There was not a single outlier,” he noted. “All 3 stages benefited from the combination in the same way.” Hazard ratios across all subgroups ranged from 0.33 to 0.55 in favor of dabrafenib and trametinib versus placebo.

"There were fortunately no fatal adverse events with the combination of dabrafenib and trametinib. There were no new toxicities that were not described for stage IV melanoma," said Hauschild. "There were AEs leading to discontinuation in 26% of the patients, which is a bit more than we expected in advance but this is the adjuvant setting so the pressure on the patient to continue getting therapy is lower than in the stage IV setting.

The FDA initially granted an accelerated approval to the combination of dabrafenib and trametinib for patients with BRAF-mutant metastatic melanoma in January 2014. The combination received a full approval in November 2015, and is now also indicated for the treatment of patients with BRAF-mutant non–small cell lung cancer.
References
<<< View more from the 2017 ESMO Congress