Dr. Pal on the Rationale for Adding Cabozantinib to Atezolizumab in Prostate Cancer

Dr. Freedland on a Real-World Analysis of Enzalutamide in mCRPC 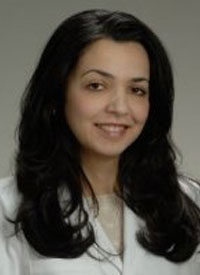 Half of a small group of patients with metastatic castration-resistant prostate cancer (mCRPC) had a PSA response during treatment with the PD-L1 inhibitor durvalumab and the PARP inhibitor olaparib (Lynparza), according to preliminary results from an ongoing trial.

Overall, 8 out of 10 patients had a reduction in PSA level, including 5 patients who had declines in PSA tests exceeding 50% or more from baseline. The cohort had a median progression-free survival (PFS) of 7.8 months.

Among 7 patients followed for more than 2 months, grade 3/4 adverse events (AEs) consisted of 2 cases of anemia and 1 each of thrombocytopenia, lymphopenia, neutropenia, nausea, fatigue, urinary tract infection, and lung infection, as reported at the 2017 Genitourinary Cancers Symposium in Orlando.

“The preliminary data show that the combination of durvalumab and olaparib is well tolerated and has activity in an unselected population,” Fatima Karzai, MD, an investigator at the National Cancer Institute, and colleagues concluded in a poster presentation. “Paired tumor biopsies and blood samples are being collected to examine potential biomarkers of response.” Accrual to a total of 25 patients is ongoing, she added.

About 30% of patients with sporadic mCRPC harbor somatic or germline mutations in DNA-repair genes,1 suggesting sensitivity to PARP inhibition. Enzalutamide-resistant prostate cancer expresses PD-L1, but limited data have accumulated regarding the safety and efficacy of PD-L1 inhibition in mCRPC.

Investigators hypothesized that increased DNA damage induced by PARP inhibition would complement the antitumor activity of durvalumab in mCRPC. To test this hypothesis, they enrolled patients with previously treated mCRPC who progressed following the most recent therapy.

The trial had a primary objective of PFS. Secondary objectives included overall response rate, safety, PSA response, and duration of response. As an exploratory objective, investigators examined the relationship between levels of circulating tumor cells and clinical outcomes.

The 10 patients included in the report by Karzai and colleagues had a median age of 65, and 9 out of the 10 had an ECOG performance status of 1. One patient had previously received abiraterone (Zytiga), 4 had received enzalutamide (Xtandi), and 5 had received both drugs. Additionally, 4 patients had been treated with sipuleucel-T (Provenge), 1 with PROSTVAC, and 1 with both agents. Five patients had previously received docetaxel (Taxotere) for metastatic disease.

The best PSA responses ranged from a decline of 15% to a decline of 99%. Other patients had declines from baseline of 94%, 79%, 73%, and 59%. Responses were observed in patients who had only bone metastases, and in those who had bone plus soft-tissue/visceral metastases, regardless of the number of prior lines of therapy, and in patients with or without mutations in DNA repair pathways.