The Future of HCC Management 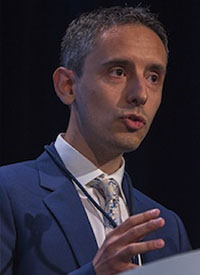 The explosion of novel agents that are approved and in the pipeline for the treatment of patients with hepatocellular carcinoma (HCC) has opened the door for future biomarker developments, explained David J. Pinato, MD, PhD.

"This is a moment of dramatic change in HCC care," said Pinato. "[The lack of biomarkers] was [a result of] a vicious circle. Patients were not routinely biopsied because there were no alternative therapies to offer them. That led to a lack of updated knowledge of the molecular pathophysiology of liver cancer. Then, that led to a lack of biomarkers for these patients."

Nevertheless, the hunt continues to determine optimal markers that could predict response to the growing number of therapies, he added. Beyond PD-L1 expression for immunotherapy, another potential target being explored is FGF19 expression. Multi-technology approaches could also help identify which tumors respond best to immunotherapy or antiangiogenic agents alone or in combination.

In an interview with OncLive during the 2020 HCC-TAG Conference, Pinato, a clinical senior lecturer in medical oncology, clinician scientist, and consultant medical oncologist in the Department of Surgery and Cancer at Imperial College London, highlighted the clinical and biological challenges in identifying biomarkers in HCC and the potential introduction of biomarkers in the future.

OncLive: What is the clinical need for biomarkers in HCC?

Pinato: HCC has been characterized by a number of failures, which have been focused around phase III developments. Obviously, a lot of money went into planning clinical trials to show superiority over standard of care in both the first- and second-line settings.

Up until recently, there was a decade of stagnation in drug development in HCC. That decade cost a lot of money and led to numerous delays in terms of providing new therapies for HCC.

Part of the problem is the fact that we are lacking a good platform of biomarkers that could help us select patients who may respond better to a particular molecular therapy versus another.

This issue is becoming more relevant now as new therapies with novel mechanisms of action [are being introduced]. We saw the results of the IMbrave150 trial with atezolizumab (Tecentriq) and bevacizumab (Avastin) in the frontline setting for patients with HCC. [Those data] are reshaping the standard of care. Additionally, PD-1 inhibitors, such as nivolumab (Opdivo) and pembrolizumab (Keytruda), are reshaping what is available for patients with HCC.

Yet, both in clinical practice and research, we are not guided by biomarkers. Features in either the tumor or biologic material can potentially predict how to best use these treatments.

What biomarkers are currently under investigation in HCC?

In terms of treatments with TKIs, there have been a number of studies trying to look at functional genomic approaches, such as tumor sequencing and transcriptomic sequencing of pretreatment tumor samples, that are emerging both from observational studies, as well as large phase III studies that led to the approval of therapies like sorafenib (Nexavar) and regorafenib (Stivarga).

Unfortunately, these studies have used high throughput technologies to try and understand the disease features on the basis of sequencing data that would scale with the presence of response or refractoriness to 1 particular type of therapy.

For the traditional TKIs, such as sorafenib and regorafenib, we haven't seen a lot of progress. This is mostly because these treatments are untargeted, and we don't know how to best select patients for these therapies.

There have also been molecularly driven studies with tivantinib or fisogatinib, for example, which has looked at FGF19 expression as a potentially novel biomarker.

The experience of fisogatinib with FGF19 expression stands out because it is the first time that we have seen the potential for 1 immunohistochemical marker to enrich responses to a specific targeted anticancer therapeutic.

Immunotherapy is an expanding therapeutic modality. PD-1 expression has been looked at as a potential biomarker of response. This is on the backdrop of PD-1 immunohistochemical expression being a companion diagnostic in other oncologic indications, such as non-small cell lung cancer (NSCLC). However, this has not been predictive of outcomes in HCC.

We ran a study at Imperial College London called Blueprint-HCC, in which we looked at the different platforms that have been used to test for PD-L1 expression. From that study, we showed that there is a lot of heterogeneity in the way PD-L1 is detected across antibodies.