Dr. Huey on Navigating the Landscape of HCC 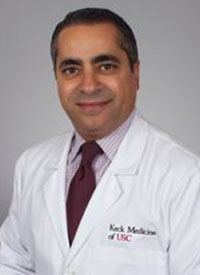 El-Khoueiry, associate professor of medicine at USC Norris Comprehensive Cancer Center, said there are several reasons why those monotherapy trials might have failed, including that single agent therapy might not be sufficient.

“So how do we move forward? There are many ways. One is to use smart combinations to address the various mechanisms of immune resistance, whether primary or secondary.”

El-Khoueiry said there is a strong rationale for anti-VEGF agents and tyrosine kinase inhibitors (TKIs). There is “ample preclinical evidence” showing that targeting the VEGF axis leads to decreases in the activity of inhibitory cells, increased PD-L1 expression, and enhanced T cell tumor infiltration and activation.

In data from the multiarm, phase Ib GO30140 trial, the combination of atezolizumab (Tecentriq) and bevacizumab (Avastin) demonstrated strong efficacy as first-line therapy in 2 groups of patients with unresectable or metastatic HCC.1

The confirmed objective response rate (ORR) was 36% (95% CI, 26-46) according to central review per RECIST v1.1 including a complete response (CR) rate of 12%. ORR was 39% per mRECIST with a CR rate of 15%. The median duration of response was not reached. Sixty-eight percent to 76% of patients had ongoing response.

The efficacy of the atezolizumab/bevacizumab combination was further validated in results from the phase III IMbrave150 trial.2 In the trial, 501 patients with unresectable HCC were randomly assigned in the frontline setting to 1200 mg of IV atezolizumab plus 15mg/kg IV bevacizumab every three weeks or 400 mg of sorafenib twice daily. Patients stayed on study until unacceptable toxicity or loss of clinical benefit.

El-Khoueiry noted that investigators were concerned about toxicity with the combination because, in other tumor types, bevacizumab is known to increase the risk for bleeding and arterial events. These safety results showed that the combination did not appear to increase risk for treatment-related adverse events (TRAEs). “The safety profile looked quite manageable and comparable across both arms,” El-Khoueiry said.

In July 2019, the FDA granted a breakthrough therapy designation to the combination of pembrolizumab (Keytruda) and lenvatinib (Lenvima) in the first-line settings for patients with advanced unresectable HCC that is not amenable to locoregional therapy, based on findings from the phase Ib KEYNOTE-524/Study 116 trial.3 In the multicenter, open-label, single-arm, phase Ib trial, patients were assigned to 200 mg of pembrolizumab every 3 weeks and lenvatinib at 12 mg daily for patients weighing ≥60 kg, and 8 mg/day for patients weighing <60 kg.

Eligible patients had Barcelona Clinic Liver Cancer stage B that was ineligible for transarterial chemoembolization or C, Child-Pugh class A, and an ECOG performance status of 0 or 1.