The Clinical Significance of MGUS 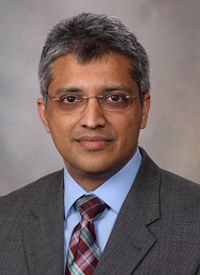 The addition of venetoclax (Venclexta) to the combination of bortezomib (Velcade) plus dexamethasone significantly improved clinical outcomes in patients with relapsed/refractory multiple myeloma in the phase III BELLINI trial, but a venetoclax regimen may be most suited for patients with t(11;14) abnormality or high BCL-2 expression, according to lead investigator Shaji K. Kumar, MD.1

Although the venetoclax combination met its primary endpoint of improved progression-free survival (PFS), it was associated with an increased risk of death. In March, the FDA suspended enrollment in BELLINI and other multiple myeloma studies in which patients were receiving venetoclax.2 The agency lifted a partial clinical hold on the phase III CANOVA study (NCT03539744) evaluating venetoclax plus dexamethasone in patients with the t(11;14) translocation in June.3

The BELLINI findings point to a potential role for venetoclax in subsets of patients with multiple myeloma and illustrate the importance of developing therapies targeted to different types of the malignancy, Kumar said in a presentation during the 17th International Myeloma Workshop (IMW). IMW was held September 12 to 15 in Boston, Massachusetts.

“The results of the BELLINI trial provide us with a blueprint of how we move this drug toward approval for patients who can benefit from it,” Kumar, a hematologist at the Mayo Clinic in Rochester, Minnesota, said in an interview with OncLive. “… Venetoclax is part of an important class of drugs that targets an important pathway in myeloma.”

Venetoclax selectively inhibits BCL-2. During his presentation, Kumar noted that BCL-2, along with MCL-1 and BCL-XL, promotes the survival of multiple myeloma cells.

OncLive: Could you explain your findings from the BELLINI trial?

We also examined the minimal disease negativity, which was significantly higher, about 13% versus 1%, in patients who received venetoclax versus bortezomib and dexamethasone. This also translated to a better PFS, with significant improvement. Median PFS for patients in the venetoclax arm was 22.4 months compared with 11.5 months in patients who received bortezomib and dexamethasone.