Dr. Goodman on the Importance of the ECHELON-2 Data in PTCL

Dr. Burke on the Ongoing First-MIND Trial With Tafasitamab in DLBCL

Dr. Viprakasit on the Results of the BELIEVE Trial With Luspatercept in Beta-Thalassemia 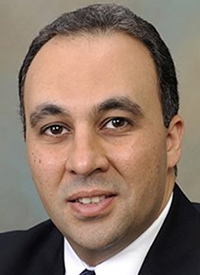 Narsoplimab (OMS721) is advancing through the therapy pipeline as a novel treatment option for patients with transplant-associated thrombotic microangiopathy (TA-TMA), according to discussions on the posttransplant complication at the 2020 Transplant & Cellular Therapies Meetings.

There are currently no established therapy regimens for the treatment of patients with TA-TMA after hematopoietic stem cell transplant (HSCT), the expert discussants noted. Initial management strategies involve treatment of underlying or coexisting conditions, such as infections or graft-versus-host disease (GVHD) and withdrawal of the offending agent. Slightly over half of all cases resolve following withdrawal of calcineurin or mTOR inhibitors.

“TA-TMA is one of the most devastating posttransplant complications,” Samer K. Khaled, MD, medical director of hematology and HCT Clinical Operations at City of Hope, said during the presentation. “It is characterized by microangiopathic hemolytic anemia, thrombocytopenia, and end-organ damage.”

“The most promising agents are complement inhibitors,” Khaled said. “The lectin pathway is one of the principle pathways of complement activation.”

He went on describe the investigational agent narsoplimab (OMS721), an IgG-4 monoclonal antibody which acts to inhibit the effector enzyme MASP-2 of the lectin pathway.

In a 3-stage, uncontrolled, multiple dose-escalation phase II study whose results were presented at the 23rd Congress of the European Hematology Association, patients treated with narsoplimab had improved overall survival (OS) as compared with historical controls. In addition, the agent demonstrated an acceptable safety profile with the most frequently reported adverse events being consistent with historical controls.2

Stage 1 of the trial involved an ascending-dose, 3-cohort design with patients receiving either low-, medium-, or high-dose narsoplimab. Stage 2 treated patients with 4 once-weekly administrations of narsoplimab at the highest dose; patients who tolerated treatment were permitted to received 4 additional weekly doses in stage 3.

The 100-day survival rate in patients treated with narsoplimab was 68%, with 83% of those who received treatment for ≥4 week alive at 100 days. Ninety-three percent of patients who responded to treatment survived to the 100-day mark.

Based on comparison with a historical analysis, narsoplimab resulted in a statistically significant improvement in median OS, at 347.0 days versus 21.0 days (P <.0001).

Patients on the trial had a median age of 48 years and 71% were men. Risk factors for TA-TMA included GVHD in 64%, significant infection in 79%, noninfectious pulmonary complications in 18%, and neurological signs in 36%.

The FDA had previously granted narsoplimab breakthrough therapy designation for the treatment of high-risk TA-TMA as well as orphan drug designation for TA-TMA therapy and complement-mediated TMA prevention.

Another agent that may protect the endothelium from this condition is defibrotide, which has a mechanism of action that blocks plasminogen-activator inhibitor-1 and reduces the effects of tumor necrosis factor (TNF). Damage from calcineurin inhibitors is reduced by the agents antithrombotic and thrombolytic effects. Defibrotide is being explored in a phase II pilot trial as prophylaxis for TA-TMA (NCT03384693).

In addition to the challenges surrounding lack of viable therapy options, clinicians also struggle to come to agreement about what constitutes TA-TMA.

“As of today, we still do not have distinct criteria for what constitutes TA-TMA,” Sergio Giralt, MD, who is chief of adult bone marrow transplant service at Memorial Sloan Kettering Cancer Center, added during his discussion about identification of TA-TMA in patients posttransplant.

Lack of consensus around diagnostic criteria has resulted in wide-ranging reports about the overall incidence of TA-TMA following allogeneic HSCT, with some studies recording incidences of 2% to as high as 20% in single-institution studies.