Expert Highlights Luspatercept Benefit as Treatment of Anemia in Myelofibrosis

Dr. Pemmaraju on Methods to Treat Anemia in MPNs 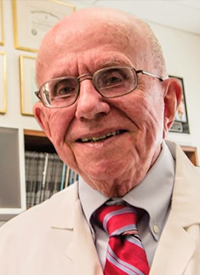 Despite the rise of newer, effective therapies since the inception of interferon 30 years ago, there is still a biologic basis for its use in the treatment of patients with myeloproliferative neoplasms (MPNs), according to Richard T. Silver, MD.

, Silver provided the history of interferon and shared insight on why the drug still holds its place in the treatment of patients with MPNs.

OncLive: How has interferon been used traditionally for the treatment of patients with MPNs?

Silver: The use of interferon was first reported by me in 1988. Since that time, we have developed extensive experience using it at Weill Cornell Medicine. We use it preferentially to any other agent because there is a biologic basis for its use. In comparison with the most commonly used drug—hydroxyurea, which is a nonspecific cell poison—there is a biologic basis for its use. It interferes with cell development and marrow fibrosis by interfering with PDGF and VEGF; it also affects JAK signaling. As I said, interferon is a drug for which there is a meaningful use—it is not a nonspecific myelosuppressive.

We believe that there are 2 reasons for using interferon. First, there is a biologic basis for its use, and secondly, it avoids the development of iron deficiency. In addition, there is evidence that interferon can reduce thrombotic risk, which is significant for patients who are only treated with phlebotomy. We also have evidence from more than 300 patients with PV that the fibrosis we see in this disease will have a delayed onset of disease when they are treated with interferon; this is because interferon affects PDGF and TGFβ, as well as other cytokines that are responsible for the development of myelofibrosis. This is very exciting, and it is new information; it has never been shown in any population of patients. We presented a poster on this at the 2018 ASH Annual Meeting.

Could you expand on the use of interferon in today’s landscape?

We believe that in the long-term—not the short-term use—that hydroxyurea can cause leukemia in about 8% to 10% of patients. In a 15-year span, this number increases to about 15%. A patient can no longer use the drug if he/she develops secondary leukemia. There has never been a controlled study evaluating hydroxyurea over the long-term compared with phlebotomy because most patients cannot stay on phlebotomy.
... to read the full story
To Read the Full Story
REGISTER
LOG IN