Dr. Burris on Ongoing Research With ADCs in TNBC
OncologyLive > Vol. 18/No. 18 > 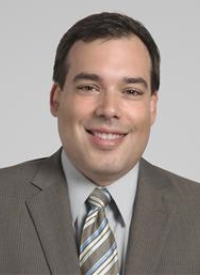 Alberto J. Montero, MD, MBA
Although dual HER2 blockade strategies have become an important part of the treatment paradigm for patients with HER2-positive breast cancer, the complexities of administering these therapies continue to unfold. This was evident in recent findings from the APHINITY trial, which demonstrated a benefit with the addition of pertuzumab (Perjeta), a HER2-targeting agent, to trastuzumab (Herceptin) plus chemotherapy compared with the standard of care as adjuvant, postoperative therapy for patients with early breast cancer.

Alberto J. Montero, MD, MBA, who specializes in breast cancer, discussed dual HER2-targeting strategies in an interview with OncologyLive®. Montero is an associate professor of hematology oncology at Cleveland Clinic in Ohio. His research interests include the development of novel targeted therapies to improve clinical outcomes in patients with breast cancer. He has led more than 30 clinical trials and published more than 70 peer-reviewed research papers.

What role does dual HER2 blockade currently play in the treatment of patients with HER2-positive breast cancer?

In both nonmetastatic and metastatic settings, dual monoclonal antibody (mAb) therapy with trastuzumab/pertuzumab is considered the standard of care.

Do you think dual HER2 blockade regimens eventually will be used without chemotherapy for certain patients?

Not in the foreseeable future.  The MARIANNE trial tried to look at an antibody-alone combination in the metastatic setting as first-line therapy in HER2-positive breast cancer. This was a traditional superiority study design looking at whether T-DM1 [trastuzumab emtansine; Kadcyla] in combination with pertuzumab would be superior to trastuzumab plus a taxane or T-DM1 alone. Because this study was designed prior to the CLEOPATRA trial results, there was no taxane/pertuzumab/trastuzumab arm.
... to read the full story
To Read the Full Story
REGISTER
LOG IN