Russell J. Ledet, PhD, discusses being a Black man in the field of oncology. 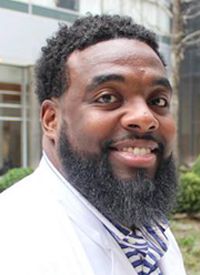 I do not know how to explain that you and I, dear reader, live in different worlds. In one, we can exclusively talk about cancer, medicine, patient care, and still crack jokes with each other. In another world, many Black scientists, doctors, nurses, and even cancer survivors are constantly thinking about the inescapable specter of racism. It’s impossible to quite put a finger on what it is physically, but that specter is, indeed, there and ever present.

As an oncology fellow, scientist, activist, and Black man, people have asked me how the social unrest of summer 2020 is affecting me personally. I’m rather vocal about issues affecting the Black community, from redlining and health disparities to cancer survivor advocacy and the need for more Black physicians. I am also responsible for one of the most iconic illustrations of the late US Representative John Lewis’s call to challenge injustice by getting into “Good Trouble,” with the group of Black physicians and medical students that I helped found. That group, the 15 White Coats, works to educate and inspire the next generation. I wrote this message so that every time folks would ask me how I was feeling, I wouldn’t have to explain myself all over again.

I would be lying if I didn’t say this is the most fearful I have ever been for my life. My stomach is in knots every day, and I see no solution in sight. I, personally, am trying to muster the willpower and where-withal to get through another day. For me, the most disheartening thing is being forward thinking enough to consider the fact that my Black children are seeing folks who look like them be killed monthly, and sometimes weekly, and it is completely legal. I wonder the psychological impact that will have on them 15 to 20 years from now and how they will live that as their norm.

I will be candid. I spent so much of my life trying to avoid where I came from because I was convinced that getting all these degrees and becoming a part of the “upper echelon” was the way to live in peace. At this point, I wouldn’t bat an eye at moving back to my neighborhood of Carshop in Lake Charles, Louisiana. It was much safer than being more “established” and not knowing if the next time cops stop you for absolutely nothing will mean you'll never again hug your kids, or kiss your partner, or play basketball with your homies. This is about as painful as it’s been to be Black in America in my lifetime, and I know that some part of it is the added stress of this pandemic.

That is my reality. What is also my reality? I am a US Navy veteran, a graduate of a historically black college or university, a molecular oncology scientist, an MD-MBA third-year student at Tulane University School of Medicine, and the cofounder of The 15 White Coats. I have done everything America told me had to be done to finally be accepted in this country as a human being, and not a threat. Yet, I had this conversation just 2 weeks ago in the operation room (OR) doctor’s lounge with 2 attending physicians, both White men in their late 40s:

Attending: Man, I just wish I could go back to the 1950s. Life was so much simpler.

Attending: You know man, things were just right back then.

My attending: (Looks over at me, looks over at the other attending.) Nah, probably for White people, but for him that probably wouldn’t have been a good time.

Attending: Yeah, well, everyone had times in history they didn’t like. It was a good time though.

My attending: Yeah, I think our patient is in the OR. Let’s go scrub in.

I am in a position where I cannot, for the sake of my evaluations and the inherent hierarchal nature of medicine, express my disdain for that type of pro1950s thinking. What is even more concerning is that, even with all the social movements designed to resign these types of thoughts and comments to the ashbin of history, this kind of thing still happens so easily and so often. “Luckily,” I have had enough of these experiences to know when and how, and how not to, react. That doesn’t mean this kind of “thick skin” moment doesn’t hurt.

Moments like that one and like the summer of 2020 come and go. What I think won’t last as long is the battle for freedom. I don’t think God will allow us to fight this battle much longer. That, alone, is my prayer, without ceasing. It is my hope as well. If I had to tell God where things went wrong, I’d tell him in the birth of the Black existence. He should have left us in Heaven. In his heart, and never subjected us to this journey across the Sahara without water. Even the richest Black royalty is still looking for freedom. I imagine the day in which Black royalty reigned without bound. In those days, the air was crisp, and even the birds were attentive to our melanin.

I will say we are possibly on the cusp of much progress. Some parts of our government are considering that Black people may have a point, that things may not have been fair for a really long time. Private companies are finally getting around to financially supporting companies and communities that were ignored for far too long. Educational institutions are finally understanding the importance of Black people in positions of power, and not as a gesture of kindness, but as an acknowledgement of excellence.

Medical institutions are “considering” the idea of evaluating their role in health disparities that have been exacerbated by the novel coronavirus disease 2019 pandemic but were here long before that. The infamous US Public Health Service Syphilis Study at Tuskegee, aka The Tuskegee Experiment, is well known, but in her book, Medical Apartheid: The Dark History of Medical Experimentation on Black Americans from Colonial Times to the Present, Harriet A. Washington details how the US medical establishment has subjected Black bodies and minds to violence since the nation’s earliest days. There is a reason so many Black and brown people don’t trust doctors.

Clinicians in every capacity are having “The Conversation” in spaces where that conversation once would have been taboo. For those who do not know, “The Conversation” is an ongoing dialog with colleagues about racial dynamics in the workspace, especially scientific and medicine workspaces, where Black people seem to be anomalies. For me, that is progress.

But, to be frank, this is not all the progress we asked for. It is welcomed and appreciated, but more lasting progress will come from legislation that forces those with lethal power to appreciate Black existence and stop seeing us as slightly more advanced teaching tools. Let us all learn about history that makes us uncomfortable so that we don’t continue to make the mistakes of our ancestors. Go and read.