The addition of abemaciclib to endocrine therapy led to a significant reduction in the risk of invasive disease versus endocrine therapy alone in patients with high-risk early hormone receptor–positive, HER2-negative breast cancer.

The addition of abemaciclib (Verzenio) to endocrine therapy led to a significant reduction in the risk of invasive disease versus endocrine therapy alone in patients with high-risk early hormone receptor (HR)–positive, HER2-negative breast cancer, according to findings from the phase 3 monarchE trial that were presented during the 2020 ESMO Congress.1

“This is the first time in more than 20 years that we have seen an advance in the adjuvant treatment of this form of breast cancer,” said Stephen Johnston, MA, PhD, FRCP, lead study author and professor of breast cancer medicine at the Royal Marsden NHS Foundation Trust, in a press release.2

HR–positive breast cancer is the most common form of breast cancer, affecting 70% of patients. The majority of these patients are diagnosed with early disease, and although many of these patients can be cured with surgery, radiotherapy, chemotherapy, and hormone therapy, approximately 20% will experience local recurrence or distant relapse in the first 10 years of treatment. For patients with high-risk clinical and/or pathological features, the risk of recurrence is even greater, particularly during the first few years on adjuvant endocrine therapy.

“These patients with high-risk early breast cancer show a degree of resistance to hormone therapy, relapsing early despite everything we currently give them,” said Johnston. “CDK4/6 inhibitors, such as abemaciclib, have transformed the way we treat metastatic breast cancer over the last few years, overcoming primary endocrine resistance and improving survival. So, it was an obvious step to see whether adding abemaciclib to hormone treatment in patients with high-risk early breast cancer could reduce the risk of their cancer returning.”

The international monarchE trial included 5,637 men and women with pre- and postmenopausal high-risk early HR–positive, HER2-negative breast cancer. Patients were eligible for enrollment regardless of whether they had received prior neoadjuvant and adjuvant chemotherapy. Though, the majority received prior anthracycline/taxane-based chemotherapy. Patients with distant metastases were excluded from enrollment.

After completing primary therapy, patients were randomized 1:1 to 150 mg of abemaciclib twice daily for up to 2 years plus 5 to 10 years of endocrine therapy (n = 2808) as clinically indicated versus endocrine therapy alone (n = 2829).

Patients were stratified by prior chemotherapy, menopausal status, and region.

Further results demonstrated that the addition of abemaciclib to endocrine therapy also had a significant impact on DRFS across all prespecified subgroups, reducing the risk of distant recurrence by 28.3% (HR, 0.717; 95% CI, 0.559-0.920; P = .0085). The 2-year DRFS rates were 93.6% with abemaciclib versus 90.3% with endocrine therapy alone, reflecting an absolute improvement of 3.3%.

A total of 92 patients experienced distant recurrence on abemaciclib versus 142 on endocrine therapy alone. The greatest reduction in metastatic sites with abemaciclib was seen in the bone and the liver, followed by the brain, lymph nodes, pleura, and central nervous system (Table).

The safety was consistent with the known profile of abemaciclib. A total of 463 patients (16.6%) discontinued abemaciclib due to adverse effects; 306 of these patients continued on endocrine therapy. The most common reason for discontinuation was diarrhea (5%), which was otherwise well managed with antidiarrheals and dose adjustments. Notably, the protocol allowed dose reduction from 150 mg to 100 mg twice daily if necessary.

“Adherence to treatment will be an important issue to be considered in the real-life population of patients when this treatment is approved and used in clinical practice,” said Giuseppe Curigliano, MD, PhD, associate professor of medical oncology at the University of Milan, and Chair of the ESMO Guidelines Committee, in the press release.

Tissue and plasma samples, which were collected from all study participants for translational research, will include looking at genomic signatures and response to abemaciclib.

“This is the first study to show that adding a CDK4/6 inhibitor to endocrine therapy significantly improves IDFS in the adjuvant setting,” said Curigliano. “This is a very important trial, and the findings will change practice. Once approved for high-risk HR–positive, HER2-negative early breast cancer, the new standard of care for these patients will be to add two years of abemaciclib to endocrine therapy.”

Dr. Dumbrava on the Mechanism of Action of BDC-1001 in Advanced HER2-Expressing Breast Cancer

Dr. Harismendy on the Challenges Faced With Molecular Testing in DCIS 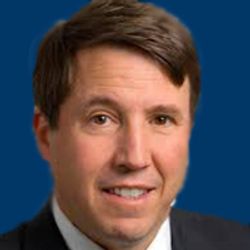