The triplet of acalabrutinib (Calquence), venetoclax (Venclexta), and obinutuzumab (Gazyva; AVO) is highly active as frontline therapy for patients with chronic lymphocytic leukemia. 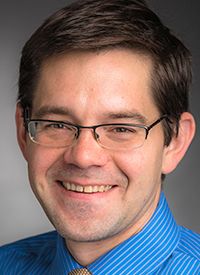 The triplet of acalabrutinib (Calquence), venetoclax (Venclexta), and obinutuzumab (Gazyva; AVO) is highly active as frontline therapy for patients with chronic lymphocytic leukemia (CLL), according to results from a phase II study presented at the 2019 ASH Annual Meeting.

After cycle 8, 16.7% of patients achieved a complete response (CR) with undetectable MRD in the bone marrow. This rate was relatively unchanged (12.5%) after cycle 16, said Lampson, medical oncologist at Dana-Farber Cancer Institute.

The safety profile of AVO was favorable. Notably, the rate of infusion-related reactions was markedly lower with AVO when compared with historical data for obinutuzumab alone or with chemotherapy. In addition, pretreatment with acalabrutinib and obinutuzumab reduced the risk of tumor lysis syndrome (TLS) at the time of venetoclax administration.

Since these 3 agents work via non-overlapping mechanisms and have non-overlapping toxicities, said Lampson, “it makes sense to ask, can we combine them to achieve even deeper, more durable remissions in CLL?” Preclinical data support that the combination of BTK inhibition and Bcl-2 inhibition can synergistically kill CLL cells.

“Efforts are already under way to examine an IVO [ibrutinib, venetoclax, obinutuzumab] triplet in CLL; the IVO combination is highly active with a high number of patients achieving undetectable MRD, particularly given that this was in the relapsed setting,” Lampson said. 2 “The rate of infusion-related reactions was high and the adverse event list is dominated by side effects that we have come to associate with ibrutinib, including bruising, hypotension, and joint pains.”

The AVO regimen studied is an attempt to achieve the benefit of triplet therapy while avoiding some of the aforementioned side effects, he said.

Acalabrutinib, venetoclax, and obinutuzumab were started sequentially, with a 28-day cycle lead-in with acalabrutinib at 100 mg twice daily, followed by 6 cycles of obinutuzumab at standard dosing. Ramp-up of venetoclax began at cycle 4, day 1. Combination therapy continued for a total of 15 cycles, at which time the primary endpoint of iwCLL CR with undetectable MRD in the bone marrow is assessed.

Median age of patients was 63 years. Eligibility criteria included an absolute neutrophil count ≥500/mm3 and platelets ≥30,000/mm3. Many patients had unfavorable disease characteristics at baseline: 62.2% had unmutated IGHV and 27.0% had TP53-aberrant disease. TP53 aberrant disease, present in 10 patients, was defined as either del(17p) and/or TP53 mutation.

Serious adverse events included 2 cases of laboratory tumor lysis syndrome, both occurring after obinutuzumab initiation and prior to venetoclax, and 1 case of an elevation in cardiac troponin level, “possibly due to demand ischemia in the setting of severe obinutuzumab-related infusion reaction,” he said. “Only 8 patients overall experienced an infusion-related reaction. This corresponds to a rate of 22%, which compared favorably to the 50% to 70% rate that we typically see with obinutuzumab when administered alone or in combination with chemotherapy.” Two patients experienced hypertension and 1 had grade-3 atrial fibrillation.

Acalabrutinib dose had to be reduced to 100 mg daily due to headache in 2 patients; in 1 patient, the dose was able to be re-escalated to 100 mg twice daily. Venetoclax dose reduction was required in 1 patient due to grade-4 neutropenia despite growth factor support. One patient with pre-existing gastritis, duodenitis, and symptomatic splenomegaly discontinued all study medications.

Pretreatment with acalabrutinib and obinutuzumab was able to mitigate venetoclax-associated TLS, said Lampson. “Indeed, TLS risk was reduced by the 3 cycles of lead-in therapy,” he said. At baseline, 98% of patients were considered to be at either medium or high risk for TLS. Per reassessment of TLS risk by computed tomography and complete blood counts prior to venetoclax administration, 89% of patients were considered to be at low risk of TLS.

“At cycle 4, immediately prior to initiation of venetoclax, 97% of patients had a response,” he said. “All of these were partial responses.” At cycle 8, after completion of obinutuzumab, we start to see the appearance of patients with CRs, and out of the 100% response rate at cycle 8, 25.0% of these are CRs.” In the 8 patients who had been treated for 16 cycles at data cutoff (July 11, 2019), the ORR was 100%.

There was no difference in response rates or the rate of undetectable MRD between IGHV-mutated and IGHV-unmutated subgroups. AVO triplet therapy remained highly active in the 10 patients with TP53-aberrant disease; at cycle 4, the ORR was 90% and at cycle 8, the ORR was 100%. At cycle 8, 78% of patients with TP53-aberrant disease had undetectable MRD in the peripheral blood and 33% bone marrow.