Incidence of surgery refusal has increased by nearly 50% among Black and Hispanic women with potentially curable, nonmetastatic breast cancer over the past decade, according to findings from an analysis of Surveillance, Epidemiology, and End Results Program data. 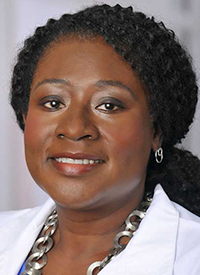 Incidence of surgery refusal has increased by nearly 50% among Black and Hispanic women with potentially curable, nonmetastatic breast cancer over the past decade, according to findings from an analysis of Surveillance, Epidemiology, and End Results (SEER) Program data.

“Thank goodness, it wasn’t a high population,” lead author Bridget Oppong, MD, an associate professor in the Division of Surgical Oncology and a breast surgical oncologist at The Ohio State University Medical School in Columbus, said in an interview with OncLive®. “But the surprising fact is that it’s an increasing population. It was about half a percent at the beginning of the study period, or 2005. Now it’s approaching 1% as we get into 2015. It’s a phenomenon that’s increasing, and, specifically, it’s increasing amongst the non-Hispanic black women.”

Surgery refusal was significantly associated with an increased risk for death in both Black and Hispanic women (P <.0001).

Oppong was inspired to investigate the rate of refusal based on observations from her own practice. She noted that more patients were presenting with advanced disease and refusing treatment or who came to her after initially refusing treatment. At that point, the patient’s disease had advanced, limiting the available treatment options.

Although cost of surgery may have been a concern, most of the women who refused surgery were insured.

Those who refused surgery were more likely to be aged 81 years or older and less likely to be 41 years of age or younger (P <.001). For all patients, Oppong said fear and denial are the main drivers of refusal. “This is the population that, for a variety of reasons…just cannot accept that they need to have surgery,” she said.

“Then you have the subset who, yes, they’ve gotten a mammogram, they’ve gotten the workup, but, again, they want to control the narrative, and will only accept the treatments that they feel comfortable accepting. A lot of people are wary of medications and wary of what we call research-backed or evidence-based treatments. They’re more comfortable trying things that are quote/unquote, natural.”

The endemic mistrust Black Americans hold toward the medical establishment is long standing and well documented.2 Oppong and her colleagues found different motivators for refusal based on age. Older women, she said, often want to avoid invasive treatment. Or the patient decides she doesn’t have a lot of years left any way and puts a different valuation on life.

Younger women, she said, are more likely to have researched their disease online and found alternative treatments. They want to avoid the health care system in general.

“These women only will come in when they see things are advancing, or things are uncomfortable—if they have drainage, if they have a wound,” Oppong said. “But again, just that mistrust makes it really difficult for them to even see me and to learn about the pathology, learn about how things are going to go.”

Oppong acknowledges that a certain amount of trepidation about traditional medicine makes sense—these treatments have side effects that can be serious and painful. Therefore, she spends a great deal of time walking patients through the process of surgery, going so far as explaining how the incisions will look.

“I offer for them to meet a peer or [a previous patient],” she said. “Usually, we try to do a race concordance, and…they’re willing to go over what the experience has been like, what the scar is, and that sometimes helps—it gives them time.”

Patients may not know about how surgery and chemotherapy have improved over time. Oppong said patients are often survived at how noninvasive breast cancer surgery can be and how cosmetic outcomes can be better than expected, even for patients who undergo mastectomy.

Sometimes, she has to take a more direct approach.

“‘You will die from this,’” she tells them. “I’m very blunt with them. And I think the message does permeate, but it takes time.”

As a younger physician, Oppong was more likely to discharge these patients. She has learned that she can reach many of them with education and by consistently reinforcing the message that treatment is necessary. She will work with family members, primary physicians, and even religious leaders if it will help a patient overcome her reluctance.

“I do get a lot of women to change their minds and go ahead with surgery,” Oppong said. “But sometimes when they do agree, it’s already too late, [the disease is] already too far gone, it’s already spread. Those are the unfortunate cases. That’s what I’m always stressed about trying to prevent, because I don’t want them to move to that area where the disease is no longer curable.”