A Trendsetter in Oncology Drug Field Draws Inspiration From Patients

Howard A. "Skip" Burris III, MD, has helped launched many widely used anticancer therapies by designing and helping to implement first-in-human studies and by leading advanced clinical trials of promising drugs. He was honored in the Drug Development category with a 2014 Giants of Cancer Care® award.

"Participation in a clinical trial is the first step in fighting cancer, not the last.”

This statement holds special meaning for Howard A. “Skip” Burris III, MD, who advances cancer therapies for patients through one of the largest drug development programs in the industry. With his more than 20 years of experience in the field of early- phase clinical research, Burris has seen first-hand how novel therapies can make a difference in the fight against cancer.

Burris has ensured that this message is embedded into the clinical culture that he leads at Sarah Cannon, in Nashville, Tennessee, a cancer enterprise that pairs clinical research alongside comprehensive treatment from diagnosis through survivorship. In fact, the statement is featured prominently on Sarah Cannon websites.

“We help thousands of patients—and I get great personal satisfaction in seeing even one person benefit from a clinical trial,” said Burris, who serves in multiple roles at Sarah Cannon. As the president of clinical operations for the care service line of his organization, and the chief medical officer and executive director for its drug development arm, Sarah Cannon Research Institute (SCRI), Burris has the advantage of seeing how the delivery of new treatments has elevated the standard of care for his patients.

“Back in the early 1980s there were not many therapy options for those facing cancer,” said Burris. “It was the beginning of modern chemotherapy with drugs like Taxol and Taxotere, which were starting to shrink tumors in a targeted way, but over the last 30 years, that definition of targeted has really changed in a big way.”

Burris was just starting out his medical career at this pivotal period of time for cancer therapies. A graduate of the United States Military Academy at West Point, New York, he originally had set his sights on becoming an engineer, excelling in chemical engineering and math. Yet all roads in his life kept pointing him in the direction of medicine. “At West Point, you are assigned a family sponsor, and mine just happened to be a physician,” explained Burris. “I wanted to help make a difference with the path I chose post college, and seeing the impact that my sponsor made by helping patients was what really led me to reconsider my earlier ambitions.”

Given such influences, Burris enrolled in medical school at the University of South Alabama in Mobile, but he does admit his lack of premedicine courses in college left him somewhat unprepared for medical school. Determined to make up for it, Burris tried to learn all he could.

“I did the book work. I stayed late when we began to take care of patients. I tried to be the person to open or close on surgeries, to be in the emergency room, and it helped me gain the experience about what to do later in life as a doctor,” he said. Burris then pursued an internship and residency at Brooke Army Medical Center at Fort Sam Houston, Texas.

Though Burris was initially attracted to surgery, the experiences he had through his clinical studies and rotations helped form his deeper focus in the field of oncology. “In one of my rotations, I worked with a dedicated group of oncologists who really opened my eyes to how unique the specialty was,” said Burris. “I witnessed something I had not expected—the patients were caring for the doctor just as much as the doctor was caring for them.”

The patients also inspired him with their gratitude. “Cancer patients are those you really feel like you are partnering with, and taking the journey with,” he said. And after caring for those patients, Burris chose to continue at Brooke Army Medical Center with a fellowship in hematology and medical oncology.

Burris eventually held positions as the director of clinical research for drug development of the Cancer Therapy and Research Center and the Institute for Drug Development, both in San Antonio, Texas, from 1993 through 1996. He established the first community-based phase I drug development program in Nashville, Tennessee, in 1997, which eventually would become the SCRI.

In his earlier research positions, Burris was surrounded by forward-thinking clinicians during one of the most critical turning points in the development of cancer treatments. His mentor at the Institute for Drug Development,Daniel D. Von Hoff, MD, FACP, who demonstrated just how impactful clinical research can be for cancer, was one of the pioneers of phase I research, and has been credited with initiating many of the novel targeted cancer studies in the United States.

“He helped me to see the value of seeking newer and more effective drugs, and working with a special set of patients who were interested in participating in clinical trials,” noted Burris.

A pioneer in his own right, Burris has continued to advance phase I research and make his mark on novel therapies today. Among his many notable accomplishments, he led the first human studies for now-approved breast cancer drugs such as docetaxel, ixabepilone, lapatinib, everolimus, and ado-trastuzumab emtansine. Beyond breast cancer research, Burris has been the lead investigator and author of randomized phase III trials leading to the approval of gemcitabine, which is used to treat advanced pancreatic cancer. Burris has also authored more than 300 publications and over 450 abstracts.

Through his oversight of the drug development programs at Sarah Cannon, the organization has conducted more than 140 first-inhuman clinical trials and has held a leadership role in the development of more than half of the approved anticancer drugs over the last decade. Burris has also helped to expand Sarah Cannon’s research expertise internationally. He has collaborated with partners in the United Kingdom to initiate an early-phase research program that opened to both public and private patients in 2010, as well as a molecular profiling lab that launched in 2013.

Colleague Jeffrey Patton, MD, the CEO of Tennessee Oncology, the physician practice where Burris is also a partner, commented that “having someone like Burris at the helm of these efforts makes such growth possible.” Patton continued, “He is smart, fair, energetic, charismatic, a rainmaker—he’s a superstar.”

Patton praised Burris for being one of the smartest guys in the room at scientific meetings, and noted that, “He also has a business mind, which people defer to, wanting and valuing his opinion.” Most interesting, Patton said, is the distinctive ability that Burris has to be a research scientist as well as to handle the business aspects of medicine. 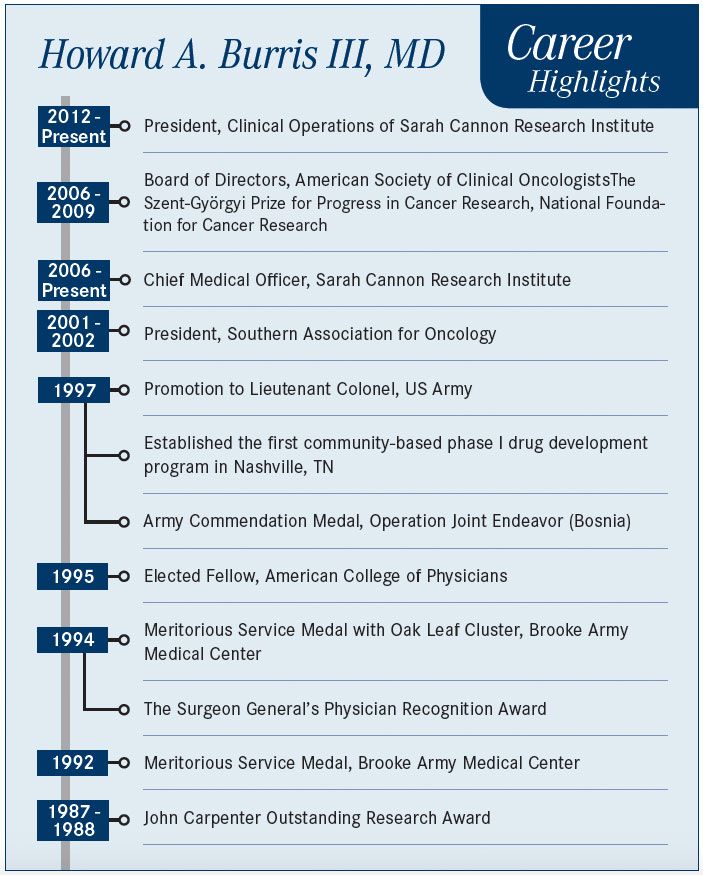 In the oversight of Sarah Cannon’s world-renowned programs for investigational drug development, Burris shared that “we see a record number of new cancer patients a year who are eligible for clinical trials—those who have exhausted standard treatments and they have a particular mutation or abnormality.”

He further explained that Sarah Cannon has hundreds of clinical visits each month that span solid tumors like breast, lung, gastrointestinal, and also blood cancers. “Within each of these cases, we see many patients who had prior treatment, but are no longer responding and need something new,” he said.

But it’s not numbers or the business elements that drive Burris to continue his focus on early-phase studies: It’s seeing countless patients who have come to Sarah Cannon after failed prior therapies and who need better alternatives.

Burris joined Sarah Cannon in 1997, which at the time was the first community-based research program that didn’t have an academic center behind it. “While there are many more programs now, it was exciting to be a part of the team that stepped out to show that phase I research could be done if you had the right support system in place,” said Burris. And community-based research is what has helped Burris to achieve such milestones in drug development.

“Over the last two decades, Dr Burris has been devoted to the advancement of therapies for patients through innovative cancer research and care,” said Sarah Cannon’s chief executive officer, Dee Anna Smith. “His significant contributions to the development of new agents have transformed cancer treatment options worldwide.”

Today, there are more than 100,000 new cancer cases diagnosed within Sarah Cannon markets across the United States and United Kingdom. “By reaching such a vast population of patients through our cancer care, we have the ability to also reach the subpopulation who are in need of and eligible for clinical trials,” said Burris.

“While a small minority of patients can afford to travel to sites across the country that may offer novel treatments, most face social and economic barriers that limit their access. And Sarah Cannon removes those barriers, so that patients can receive cutting-edge therapies closer to home.”

Burris knows all too well that without clinical research, he could not provide leading-edge therapies to his patients. Through his experiences, Burris has noted that targeted investigational therapies have really come a long way, with studies 30, 20, and 10 years ago that led to the approval of tamoxifen, Herceptin, and Gleevec, respectively.

“With the promise of immunotherapies and genomic sequencing over the last 5 years, these newer targeted methods are helping us better understand what is causing the cancer in the first place, and that’s allowing me to offer more personalized options to my patients. It’s really the best part of my week—being able to go into a clinic room and actively participate in a patient’s journey in such a meaningful way,” said Burris.

“While not every study can be a home run, we do learn from each investigational agent and end up further ahead than where we started,” said Burris.

He also acknowledges that it takes a village to make clinical trials successful. “Advancing therapies is a team approach, and I attribute my continued successes to the physicians I work with daily, the researchers I have the privilege of mentoring, the partnerships we have forged with the largest pharmaceutical and biotech companies in the world, and above all the patients who are willing to participate in our work every day,” he stated.

“One thing about cancer—it’s a humbling profession to be in for the successes and the failures. The patients who step forward and participate in clinical trials know that what they are doing is more likely to help someone else [than to help them], and seeing their strength is inspiring,” he said.

“I always feel the patients have given me the perspective, the motivation, and the energy to commit to this cause every day. Even uncertain of their futures, the patients come in for treatments, and are grateful to be a part of the process, which brings new perspective and inspiration to us all. We certainly couldn’t advance therapies without their contributions and participation and I feel they’ve given me more than I’ve given them.” 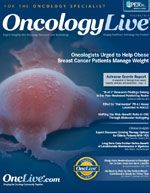