Dovitinib failed to meet the primary endpoint of improving progression-free survival (PFS) versus sorafenib (Nexavar) in patients with heavily pretreated progressive renal cell carcinoma (RCC), according to phase III interim data reported at the 2013 European Cancer Congress (ECC). All patients had received prior treatment with both a VEGF- and an mTOR-targeted therapy.

A few positive aspects for researchers were that dovitinib did have acceptable tolerability, and the study will provide landmark PFS and overall survival (OS) data for future studies of third-line agents in RCC.

“For both OS and PFS, this is the first time that that treatment results have been reported in the third-line setting for RCC, and this will serve as a reference for other studies of patients who progress after VEGF and mTOR inhibitors,” Motzer said.

Dovitinib is an oral, multitargeted tyrosine kinase inhibitor (TKI). In Phase I/II studies, the drug had good activity and tolerability. In phase II, preliminary results showed a median PFS of 5.5 months and median OS of 11.8 months, which led to the phase III open-label GOLD trial, which was a global study involving 20 countries and more than 200 investigators.

The GOLD trial sought to determine whether increased inhibition of FGFR can overcome resistance to sunitinib (Sutent). Dovitinib was compared with sorafenib, which is approved by the FDA for second-line treatment of RCC.

Patients enrolled in the trial had metastatic RCC with a clear cell component. All patients had progressive disease within 6 months of their last targeted therapy.

The study was designed to achieve a 33% difference in PFS between treatment arms and a 25% difference in OS. The ECC report was based on 570 patients; 284 were randomized to dovitinib and 286 to sorafenib. The cutoff date for the data was April 2013.

The study population was typical of a third-line therapy trial. About 23% were poor risk according to MSKCC criteria and between 35%-42% had bone metastasis. The predominant prior VEGF therapy was sunitinib (90% of patients), and the predominant mTOR inhibitor was everolimus (>85% of patients). Dose reductions were needed in 34% of the dovitinib group and 42% of the sorafenib group.

At the time of analysis, 495 patients were off study, most commonly due to progressive disease.

PFS by investigator assessment supported the primary analysis: median PFS of 3.9 months for both arms.

Similar results were seen in the subgroup analysis, with no significant PFS difference between the two arms in any subgroup.

Dr. Grünwald on Dovitinib Versus Sorafenib in mRCC

The most common adverse events with dovitinib were nausea, diarrhea, and vomiting. Events more common with sorafenib included hypertension, hand/foot syndrome, and alopecia.

Dovitinib treatment was also associated with an acneiform rash on the face and trunk, which did not respond well to topical agents and persisted after discontinuation of the drug.

Formal discussant of the study, James Larkin, PhD, FRCP, Royal Marsden Hospital, London, said this was a well-conducted prospective trial and it was the first in the third-line setting. He said the study confirms that sorafenib is a relevant benchmark for new therapies in this setting.

“By contrast with other tumors, with TKIs, the elephant in the room is that we have no predictive markers for appropriateselection of patients with RCC. We need to learn how to use the drugs we have in a better way. Further translational efforts are critical to understanding the biology of the disease better and translating that knowledge to our patients.” 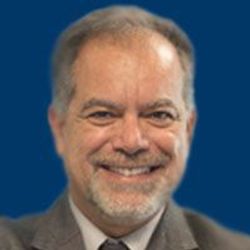 Clinical Response to Sotorasib May Vary By Genomic Profile in NSCLC