Dr. Daver on Updated Findings With Magrolimab/Azacitidine in MDS

Naval G. Daver, MD, an associate professor in the Department of Leukemia within the Division of Cancer Medicine at The University of Texas MD Anderson Cancer Center, discusses updated findings on the combination of investigational CD47-directed antibody magrolimab (formerly 5F9) and azacitidine in myelodysplastic syndrome (MDS).

Results from the phase 1b study were delivered during the 2020 European Hematology Association Congress, says Daver. A total of 39 evaluable patients with MDS were enrolled at the time of the data cutoff; these were all intermediate- to very high-risk patients with Revised International Prognostic Scoring System risk for MDS criteria. In fact, a large proportion of these patients, 64%, had poor-risk cytogenetics for MDS criteria, and the median age was around 70 years. In general, these factors were indicative of a high-risk patient population, Daver adds.

Results showed an objective response rate of 91%, which is very encouraging for such a high-risk MDS population, says Daver. True complete remission (CR) rate, which is a CR with full count recovery, was 42%. Interestingly, as treatment continued in patients beyond 6 months, which was the majority of the patients, the true CR rate increased to 56%. What that shows is that with continued exposure to the combination, there was better adjustment, count recovery, and more patients were able to achieve a CR, which is the ideal goal of treatment, concludes Daver. 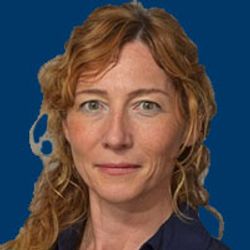